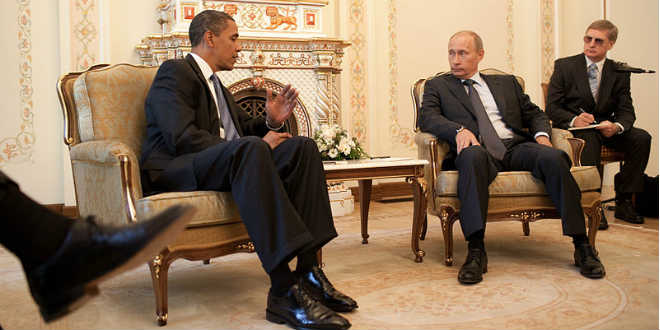 Woe unto the shepherds that destroy and scatter the sheep of My pasture! saith the LORD. (Jeremiah 23:1)

Russian President Vladimir Putin singled out Israel on Thursday saying that its alleged possession of nuclear weapons makes it “a target” and creates “foreign policy problems,” according to the Jerusalem Post.

Putin’s comments, reported by AFP, came in response to questions from reporters on the US and Russia-brokered deal to put Syria’s chemical weapons arsenal under international supervision.

According to AFP, Putin said that Syria had developed chemical weapons “as an alternative to the nuclear weapons of Israel.”
The Russian president claimed that “the technical advantage of Israel – we need to say this directly – is such that it doesn’t need nuclear weapons. Israel is already in a technical military sense several heads above the countries in the region.”

The chemical weapons deal with Syria has increased pressure on Israel to join the Nuclear Non-Proliferation Treaty.

However, also on Thursday, Putin, speaking at the annual Valdai discussion forum with political scientists, pundits and journalists, said, “I am not 100% sure that the Syrian cabinet will comply with the US-Russian chemical weapons deal, but I think there is hope,” according to The Times of Israel.

Putin also blamed the August 21 chemical attack in Damascus on the Syrian rebels. “We have every reason to believe that it was a provocation, a sly and ingenious one,” he said, adding that its perpetrators have relied on “primitive” technology, using old Soviet-made ammunition no longer used by the Syrian army.