‘Homeland’ Shoot Moved From Israel Due To Syria Threat

Home » ‘Homeland’ Shoot Moved From Israel Due To Syria Threat 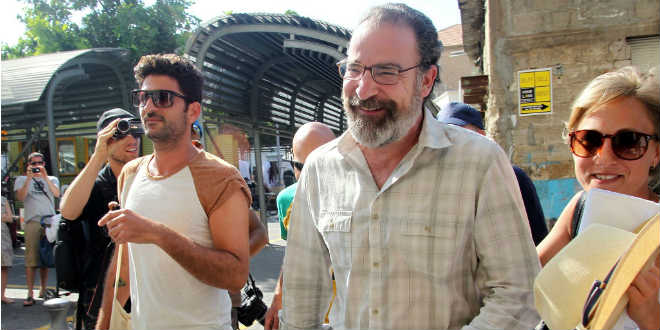 “When thou goest forth to battle against thine enemies, and seest horses, and chariots, and a people more than thou, thou shalt not be afraid of them; for the LORD thy God is with thee, who brought thee up out of the land of Egypt. …And the officers shall speak further unto the people, and they shall say: ‘What man is there that is fearful and faint-hearted? let him go and return unto his house, lest his brethren’s heart melt as his heart.’ “ (Deuteronomy 20:1, 8)

Citing security concerns, producers of the popular television show Homeland announced earlier this week that they would not be shooting scenes for the upcoming season in Israel as originally planned.  Instead, they would be shooting in Morocco.  The change, made late in the game, is expected to cost Israeli production companies hundreds of thousands of shekels.

Now in its third season, Homeland, loosely based on successful Israeli television  program Hatufim (Prisoners of War), has shot scenes in Israel for its first two seasons.  However, in light of rising tensions with Syria, and a much-debated possible US strike on that country, producers opted to relocate to Morocco.  The north African country is considered one of the more stable Arab states.

The show was created by Gideon Raff and was developed for American television by Howard Gordon and Alex Gansa.  Raff and Gordon are currently working on a new show together, Tyrant, also being filmed on location in Morocco, so moving the Homeland shoot there came as no surprise.  It did, however, catch Israeli producers off-guard.  “We were already getting organized, we even received scripts, and in the end we were told that the shooting had been moved. It’s frustrating,” a source with knowledge of the details told Ynet.

Homeland stars Damien Lewis as decorated US Marine Corps Scout Sniper Nicholas Brody and Claire Danes as Carrie Mathison, a Central Intelligence Agency officer. Mathison has come to believe that Brody, who was held captive by al-Qaeda for eight years as a prisoner of war in Iraq, was “turned” by the enemy and now threatens the United States.  The show premiered in October, 2011, on Showtime, to 1.08 million viewers, becoming Showtime’s highest-rated drama premiere in eight years.  It has won numerous awards, including both Golden Globes and Emmys for best drama series, best actor and best actress.  The American psychological drama/thriller is produced by Fox 21.