Coalition Ministers Urge Netanyahu Not To Give Land To PA

Home » Coalition Ministers Urge Netanyahu Not To Give Land To PA 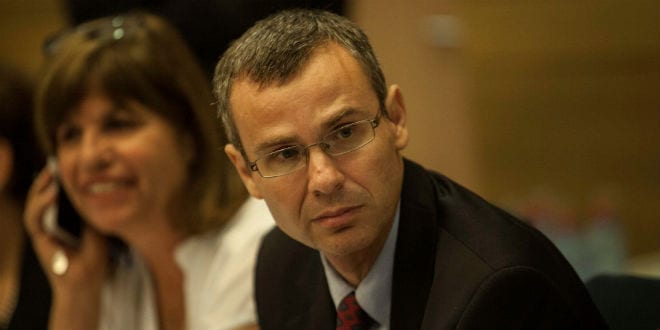 In that day the LORD made a covenant with Abram, saying: ‘Unto thy seed have I given this land, from the river of Egypt unto the great river, the river Euphrates; (Genesis 15:18)

As doubts continue to grow over a possible peace agreement between Israel and the Palestinian Authority, 16 coalition Knesset members sent a letter to Prime Minister Benjamin Netanyahu on Sunday pleading with him to not hand over any territory to the PA, according to Yisrael Hayom.

In the letter, sent to the prime minister during his meeting with U.S. Secretary of State John Kerry, the MKs called on Netanyahu “not to return to the Oslo Accord template or cede any more parts of the homeland to the Palestinian Authority.”

“I will remain coalition chairman so long as we go down the right path of construction and settling throughout all of Israel,” Levin said.

In another expression of doubt over the restarted talks, Energy and Water Resources Minister Silvan Shalom [Likud-Beytenu] said on Sunday there is no way that the current round of negotiations, scheduled for nine months, will bring peace with the Palestinians.
Speaking to Likud activists in Tel Aviv, Shalom said “no one believes a permanent agreement can be reached in nine months.”

Shalom also spoke about his recently improved ties with Netanyahu after years of political and personal rows. “We have decided to set everything aside and move forward,” he said.

Deputy Foreign Minister Zeev Klein also spoke at the event. “Netanyahu spoke before the Likud central committee 11 years ago and convinced it to vote against a two-state solution. Netanyahu said ‘yes to self-government, no to a state.’ His prophecy was fully realized.”

Additionally, hundreds of legal experts from the organization “The Legal Forum For The Land Of Israel” sent a letter to Kerry asking him to push the Palestinian Authority to negotiate in better legal faith. According to Yisrael Hayom, In a letter sent to Kerry on Saturday, the legal experts called on him to enforce the rules and behavior stipulated and agreed upon in the preliminary negotiations, to have the Palestinians stop detrimental behavior, including economic sanctions, boycotts and acts of incitement.

In the letter, former Canadian Ambassador to Israel and head of the legal forum’s international division, Alan Baker, as well as the forum’s director Nachi Eyal, cited a series of examples that, according to them, show a “clear and severe lack of good faith on behalf of the Palestinian leadership.”

“Since the start of the negotiations, we are actually witnessing an increase in boycott, divestment and sanction (BDS) activity, officially sponsored, supported and encouraged by the same Palestinian leadership that is ostensibly negotiating with Israel with your support, encouragement and accompaniment.

“Following a concerted series of threats and pressures against the Netherlands government and the Dutch water purification company Royal Haskoning DHV, the company announced this week the termination of a contract with the Jerusalem Wastewater and Purification Enterprises Ltd.

“The termination of the contract has been heralded and celebrated in official press releases by the Palestinian Authority Minister and Head of the Palestinian Water Authority, Dr. Shaddad Attili , as well as by PLO Executive Committee Member Hannan Ashrawi, as a great political success against Israel.”

The letter also mentioned famous musicians who were threatened by Palestinian bodies not to perform in Israel. By still working to harm Israel, the “Palestinian leadership is undermining the process, as well as undermining your [Kerry] own efforts to achieve progress in the negotiations.”