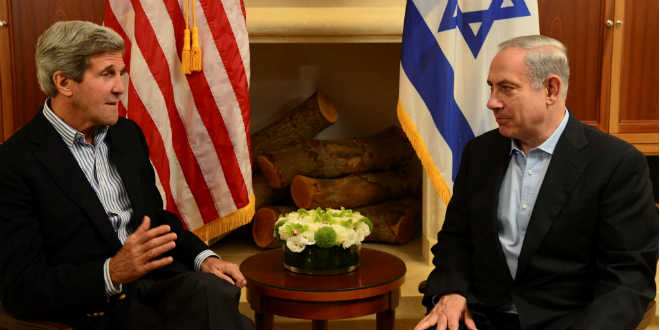 Take ye heed every one of his neighbor, and trust ye not in any brother; for every brother acteth subtly, and every neighbor goeth about with slanders. (Jeremiah 9:3)

United States Secretary of State John Kerry is set to arrive in Israel today to brief Prime Minister Benjamin Netanyahu and the rest of the Israeli leadership on the newly brokered deal between America and Russia to take control over Syria’s chemical weapons cache, according to The Times of Israel.

However, Kerry may not receive the warm welcome he might desire as many in the Israeli government expressed skepticism over the agreement to secure and destroy Syria’s chemical weapons by the mid-2014 and impose U.N. penalties if the Assad government fails to comply. The Times reported that the deal, announced by U.S. Secretary of State John Kerry and Russian Foreign Minister Sergey Lavrov in Geneva, includes what Kerry called “a shared assessment” of the weapons stockpile, and a timetable and measures for Syrian President Bashar Assad to comply. The US and Russia had been in intensive negotiations for a number of days.

Israel would of course be delighted to see the regime of President Bashar Assad stripped of chemical weapons, unnamed officials in Jerusalem said Saturday night. But Israel is extremely wary of the unfolding diplomatic framework, concerned that Assad is bent on buying time, and that the optimistic timetable set out in Saturday’s agreement will not be adhered to. Kerry will meet a “skeptical” Israeli leadership, Israel’s Channel 10 news said.

MK Avigdor Liberman said a US-Russian deal to strip Syria of its chemical weapons could be a positive development, but urged caution until it is actually carried out, according to The Times of Israel. “Theoretically, it’s good for Israel,” Liberman, who heads the Knesset Foreign Affairs and Defense committee, said in an interview with Army Radio Sunday morning. He cautioned, however, that “the true test is the implementation. Assad has a record of manipulation…Not long ago, he denied that Syria has chemical weapons at all.”

“We will be able to verify, or understand, what Assad’s intention are in another week…” said Liberman. “Israel has a pretty darn good idea of what Assad has and what he doesn’t have.”

In a United Nations document in which Syria formally submitted to the Chemical Weapons Convention on Saturday, the Assad government was prudent to not recognize Israel in any fashion, according to the Times. The document states that Syria “shall comply with the stipulations contained [in the Convention] and observe them faithfully and sincerely, applying the Convention provisionally pending its entry into force for the Syrian Arab Republic.”

The document also makes sure to affirm that “the accession of the Syrian Arab Republic to the Convention shall not in any sense imply recognition of Israel, and shall not entail entering into any relations with Israel in the matters governed by the provisions thereof.”

Syria has maintained that “the chemical weapons in Syria are a mere deterrence against the Israeli nuclear arsenal,” Syria’s ambassador to the UN, Bashar Ja’afari said Thursday.

When Kerry visits Jerusalem, the Secretary and Netanyahu are also expected to discuss the US-brokered Israeli-Palestinian peace talks which resumed in late July. This will mark Kerry’s first visit to the region since the resumption.

The Palestinians have complained that Israel is not negotiating seriously on all core issues, and focusing overwhelmingly on border concerns. Israeli officials have said that the current instability in the region underlines Israel’s demand to retain a military presence in the Jordan Valley under any accord.