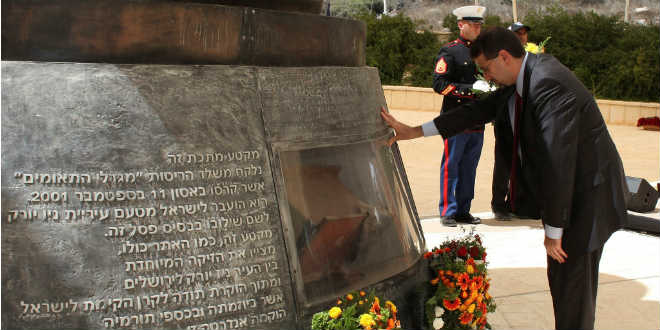 Remember mine affliction and mine anguish, the wormwood and the gall. My soul hath them still in remembrance, and is bowed down within me. (Lamentations 3:19-20)

In honor of the fallen men and women of the 2001 September 11th attacks terrorist attacks, the Jewish National Fund (Keren Kayemet LeIsrael) and the US Embassy in Israel held its 12th annual 9/11 memorial ceremony on Wednesday, according to the Jerusalem Post. Five Israelis were killed in the the fateful attacks.

The memorial was held at the 9/11 Living Memorial in the Arazim Valley in Jerusalem and attended by a number of top Israeli military and civil servants, including US Ambassador Daniel B. Shapiro, KKL-JNF World Chairman Efi Stenzler, Intelligence Minister Yuval Steinitz, as well numerous other dignitaries and mourners.

“September 11, 2001, was a normal day, like this one, with a clear blue sky,” said Shapiro. “But it quickly became an infamous day when the sky became filled with ash and smoke – seeing the world we thought we knew crumbling before us.”

Calling Israel’s and the US’s shared experience of terrorism part of the “unbreakable link connecting our countries,” Shapiro remarked about the significance that the memorial coincides with Judaism’s most sacred time of year, which he said is defined by “remembering.”
“It’s a time to remember our personal history and behavior over the past year,” he said.

“Why do we remember? Because remembering events is one of the important ways we mourn.” Shapiro continued, “History is an exercise in remembering, not forgetting.”

Stenzler denounced al-Qaida as an “evil enemy” that must be powerfully opposed. “Once again we stand at the foot of this monument and come back to the death on September 11, 2001, that has become a symbol of evil and terror,” he said. “On September 12 a sharp and clear truth arose: There is no place in our world for such an evil enemy.”

“This enemy doesn’t allow independent thought and kills anything that is not like itself,” he said. “Therefore, this monument is not just a memorial site, it is also an expression of hope.”

Steinitz praised the United States as the strongest defender of human rights over the past 100 years, adding that the alliance between the world’s leading superpower and Israel has never been stronger. “I can tell you as the Minister of Intelligence that cooperation between the two countries in terms of security and intelligence is better than ever,” he said.

Stating that it is “crystal clear” that incitement of hatred is the core element that propagates terrorism, Steinitz said the mission of peaceful nations must be to “eradicate incitement.”

The 9/11 Living Memorial is the largest memorial site commemorating the 9/11 terror victims outside of the United States. It was erected in 2009 by KKL-JNF, in partnership with JNF USA, with the support of the generous contributions from the Bronka Stavsky Rabin Weintraub Foundation and the Edward Blank family of New York.