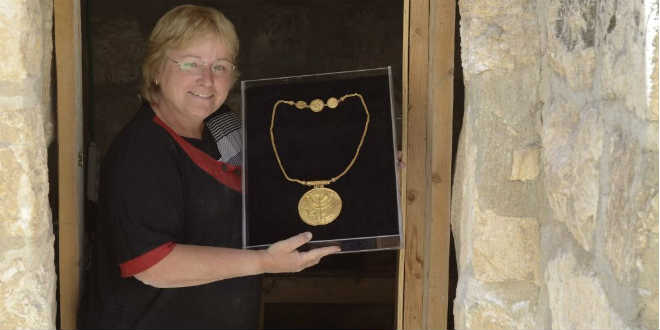 “And he said unto me: ‘What seest thou?’ And I said: ‘I have seen, and behold a candlestick all of gold, with a bowl upon the top of it, and its seven lamps thereon; there are seven pipes, yea, seven, to the lamps, which are upon the top thereof…” (Zechariah 4:2)

Third generation archaeologist Eilat Mazar, of Hebrew University, revealed Monday morning that an unusual cache of gold coins and other related artefacts, dating to the seventh century CE, were discovered this summer at the Ophel excavation site near the Temple Mount in Jerusalem.

“We have been making significant finds from the First Temple Period in this area, a much earlier time in Jerusalem’s history, so discovering a golden seven-branched Menorah from the seventh century CE at the foot of the Temple Mount was a complete surprise,” Mazar said.  The discovery is being called the “Ophel treasure,” and consists of 36 gold coins, as well as some gold and silver jewellery and a large medallion embossed with a menorah (seven-branched candelabrum), a shofar (ram’s horn) and Torah scroll, and hanging from a chain.  This is especially significant because it points to a Jewish presence in the area at the time.

The menorah continues to be an important Jewish symbol today, serving as the emblem of the state of Israel, where it is flanked by two olive branches, as described in the book of Zechariah.  The original menorah was constructed, at God’s command, from a single piece of gold (Exodus 25:31-40) and lit first in the Tabernacle and later in the Temple.  It was also famously depicted on the arch of Titus, commemorating the Roman destruction of Jerusalem in 70 CE.

Mazar points out the chain on the medallion as a clue to its original use.  She explains it was likely an ornament for a Torah scroll.  It was found buried along with a smaller gold medallion, two pendants, a gold coil and a silver clasp, likely all ornaments for the scroll.  The coins were found loose, leading to the theory that they were abandoned when the bearer failed in his task.  “It would appear that the most likely explanation is that the Ophel cache was earmarked as a contribution toward the building of a new synagogue, at a location that is near the Temple Mount,” said Dr. Mazar. “What is certain is that their mission, whatever it was, was unsuccessful. The treasure was abandoned, and its owners could never return to collect it.”

The coins, dating to the reigns of various Byzantine emperors from the mid-fourth to early seventh centuries, were discovered a mere five days into the excavation and just 50 meters (164 feet) from the Temple Mount, in the ruins of a Byzantine public structure.  Lior Sandberg, numismatics (currency) specialist at the Institute of Archaeology, identified this as the third collection to be found in Jerusalem excavations.

Given the date of the items and the manner in which they were found, Mazar estimates they were abandoned in the context of the Persian conquest of Jerusalem in 614 CE.

After the Persians conquered Jerusalem, many Jews returned to the city and formed the majority of its population, hoping for political and religious freedom. But as Persian power waned, instead of forming an alliance with the Jews, the Persians sought the support of Christians and ultimately allowed them to expel the Jews from Jerusalem.

The Ophel project has been funded by Daniel Mintz and Meredith Berkman of New York since 2009. The project includes archeological excavations, the processing of the finds for publication, as well as the preservation and preparations of the site for its opening to the public.

The Israel Antiquities Authority is carrying out the preservation works and preparing the site for the public for an unspecified date.