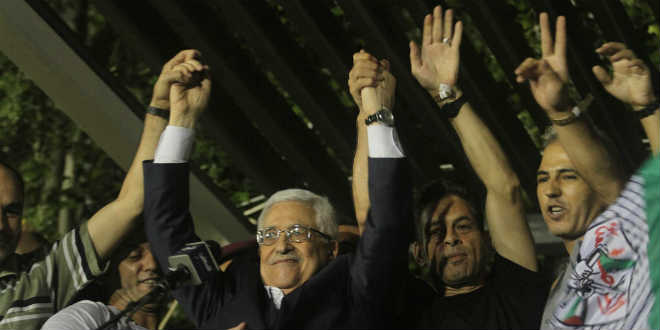 Because, even because they have led My people astray, saying: Peace, and there is no peace; and when it buildeth up a slight wall, behold, they daub it with whited plaster; say unto them that daub it with whited plaster, that it shall fall; there shall be an overflowing shower, and ye, O great hailstones, shall fall, and a stormy wind shall break forth, and, lo, when the wall is fallen, shall it not be said unto you: Where is the daubing wherewith ye have daubed it? (Ezekiel 13:10-12)

Despite announcements that last week’s violence in Kalandiya, which left three Palestinian rioters dead after they attacked the IDF with stones, bricks and Molotov cocktails, that the Palestinian Authority was putting a hold on the peace negotiations with Israel, Justice Minister Tzipi Livni met with chief Palestinian negotiator Saeb Erekat in Jerusalem on Saturday, Israel Radio reported. According to the Jerusalem Post, the two sides are scheduled to meet again on Tuesday.

On Sunday night, PA President Mahmoud Abbas announced that any peace deal made with Israel would first have to go to a referendum, mirroring an Israeli declaration of the same kind. Abbas, who was speaking at the opening of a meeting of the Fatah Revolutionary Council in Ramallah, said that Palestinians everywhere would be asked to approve an agreement with Israel through the referendum.”If there is any development and an agreement, it is known that we will go to a referendum,” Abbas clarified. “It won’t be enough to have the approval of the Fatah Central Committee or the PLO Executive Council for an agreement. Rather, we would go to a referendum everywhere because the agreement represents Palestinians everywhere.”

Referring to the current peace talks with Israel, Abbas said that that so far the two sides have only presented their views to each other. “We will wait for a period of six to nine months,” he said.

Abbas said he agreed to delay seeking full United Nations membership of a Palestinian state in return for the release of Palestinian prisoners held by Israel. “I consider the issue of the UN to be very important, but the case of the prisoners is worthy of sacrifice,” he added. “We have prepared 63 requests to join 63 UN agencies and conventions, but I said the issue of the prisoners is now more significant.”

Abbas reassured the Fatah leaders that he would not make any concessions during the negotiations with Israel. “Our positions are the same as previous ones,” he explained. “This means Jerusalem is at the top of our list of priorities. A Palestinian state with east Jerusalem as its capital. Without that there will be no solution. There will be no state without Jerusalem, which is a red line for us.”

Also on Sunday, Palestinian Prime Minister Rami Hamdallah said that a second group of Palestinian security prisoners could be released by Israel by the end of September, according to the Jerusalem Post. Israel released the first 26 of the 104 agreed upon pre-Oslo murderers on August 13. “It is possible that the second batch of pre-Oslo prisoners will be released before the end of this month,” the Bethlehem-based Ma’an news agency quoted Hamdallah as saying.

The last three rounds of talks between Israel and the Palestinians did not achieve any progress, Nabil Sha’ath, member of the Fatah Central Committee, said Sunday. “The Palestinian side held a number of negotiating sessions with the Israeli side in order to achieve progress, but Israel did not present anything positive,” Sha’ath told the Al-Resalah news website.

He said that Israel’s policy on the ground was “in complete contradiction of the principles of the peace process.” He accused Israel of pursuing settlement construction and the “Judaization” of Jerusalem.

Sha’ath said that despite the lack of progress the Palestinian Authority was determined to continue with the peace talks while not ruling out the possibility of going to international agencies and forums if the negotiations fail. Sha’ath also complained about the absence of international pressure on Israel.