Much Anticipated “Jerusalem” IMAX Set To Debut in New Jersey 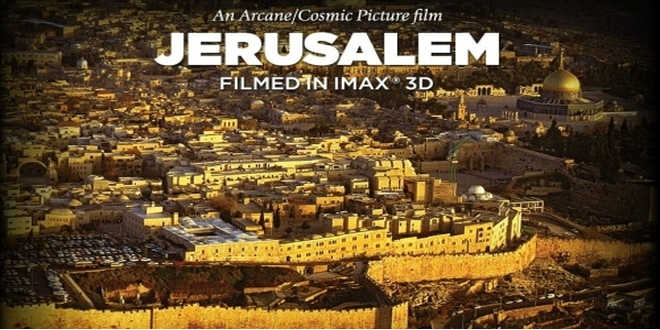 1 A Song of Ascents; of David. I rejoiced when they said unto me: ‘Let us go unto the house of the LORD.’ 2 Our feet are standing within thy gates, O Jerusalem; 3 Jerusalem, that art builded as a city that is compact together; 4 Whither the tribes went up, even the tribes of the LORD, as a testimony unto Israel, to give thanks unto the name of the LORD. 5 For there were set thrones for judgment, the thrones of the house of David. 6 Pray for the peace of Jerusalem; may they prosper that love thee. 7 Peace be within thy walls, and prosperity within thy palaces. 8 For my brethren and companions’ sakes, I will now say: ‘Peace be within thee.’ 9 For the sake of the house of the LORD our God I will seek thy good. (Psalms 122)

If a visit to Jerusalem has always seemed out of reach, a trip to New Jersey’s Palisades Center IMAX theater may just give you a taste.  On September 23, the IMAX Theatre at Palisades Center will premiere JERUSALEM, a giant-screen spectacle offering a glimpse at the city dubbed the heart of the world.

This unprecedented production is narrated by Benedict Cumberbatch, recently of Hobbit and Star Trek Into Darkness fame.  It stars, of course, the city itself.

Filmmakers were granted exclusive access to iconic holy sites, such as the Western Wall, the Dome of the Rock, the Church of the Holy Sepulchre, as well as special permits to enter the country’s strict no-fly zones, capturing unique aerial shots of Old City and the Holy Land.  The movie also takes viewers to other regional landmarks, such as the Jordan River, the Sea of Galilee and the Masada fortress in the Negev desert.

Cosmic Picture and Arcane Pictures are behind the film, which is being distributed by National Geographic Entertainment.  The executive producer was the late Jake Eberts, who also managed such blockbusters as “Ghandi”, “Dances with Wolves” and “Chariots of Fire”.  It was directed by Daniel Ferguson, who, along with Taran Davies and George Duffield, also produced the film.  Its running time is 40 minutes.

“With this extraordinary film’s immersive experience, audiences will feel as if they are really walking the streets of this beloved and iconic place,” said Lisa Truitt, president of National Geographic Entertainment.

“Through the unrivaled beauty, visceral nature and incredible technology of the IMAX format, you feel as if you are experiencing Jerusalem up-close and first-hand,” said Ferguson.

Audiences are treated to interviews with prominent archaeologists, historians and religious scholars, as well as ordinary citizens and residents of the city.  Experts explain the implications of excavations and other discoveries, while locals — three teenaged girls, from the city’s three major religious groups — each offer a tour of the Jerusalem they know and love.

According to broadwayworld.com, which announced the premiere, the Palisades IMAX theater has one of the largest screens in the country and has one of the country’s few remaining 1579 projection systems.  This system allows for sharper images at a height of six storeys. allowing audiences not only to see Jerusalem, but to experience it.