As the Middle East Burns: Is Barack Obama Arsonist in Chief?

Home » As the Middle East Burns: Is Barack Obama Arsonist in Chief? 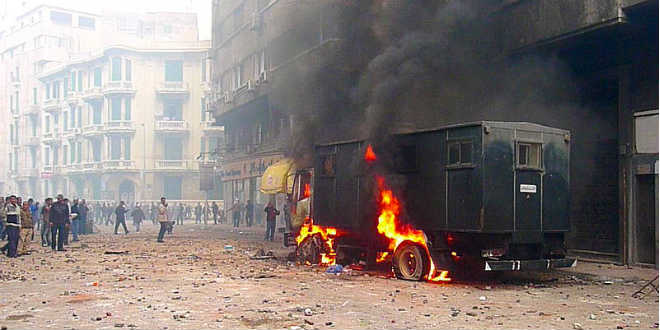 So will I send a fire into the house of Hazael, and it shall devour the palaces of Ben-hadad; (Amos 1:4)

Egypt is currently embroiled in its third violent overthrow of leadership in the past three years. While the army seeks to stabilize the population in Cairo, nationwide the Muslim Brotherhood-backed rebels have been attacking the Christian Egyptian population, murdering, among others, a little girl on her way home from Bible study at her uncle’s parish and setting ablaze over 50 churches. Obama, who delivered his “landmark” Middle East speech, in which he distanced the US from Israel and apologized to the Arab world for the policies of self-protection enacted by the George W. Bush White House, in Cairo when he first took office has already chosen the wrong side once, backing the Brotherhood’s overthrow of President Hosni Mubarak, and has remained silent thereafter, presumably because the reality on the ground has forced him to admit that he knows nothing about Egypt. Egypt is the house on fire, Israel is the house next door.

Syria has descended into chaos as well. President Bashar Assad, facing fierce opposition by the rebels in his country has unleashed, more than once, chemical weapon attacks on his own people, a previously stated “red line” for the Unite States. Reports have been rampant that the United States will surly respond militarily to these horrific acts of indiscriminate murder.  The US Navy has even stationed its ships near Israel in case a strike against Syria becomes necessary. However, instead of leading the charge against the dictator in Damascus, Obama hedged, as usual, telling CNN Friday that, “if the US goes in and attacks another country without a UN mandate and without clear evidence that can be presented, then there are questions in terms of whether international law supports it.” Obama is laughably waiting for the approval of the most corrupt international organization in the history of the world to approve of his Syria strike, otherwise he does not think he could stomach it. This is probably because Obama once officially backed the rebels, going to far as to supply them arms and training, only to discover that many of them were Hezbollah militants and the like with reality on the ground forcing him to admit that he knows nothing about Syria. Syria is the house on fire, Israel is the house next door.

It is of interest to note that missiles have been fired from southern Egypt into Israel, , and Lebanon, the Hezbollah puppet-state launched rockets into northern Israel last week and so it follows if America attacks Syria it is Israel that will be attacked in retaliation (in fact Israel has begun preparation for that very scenario). Obama has played a large part in setting the Middle East on fire and it is Israel that is constantly getting burned. The Middle East is the area on fire, and Israel is the central fire station.

And what does Obama do next? He ties up Israel, the only democracy, and strategic ally, in the region, in a pathetically aimless peace process with a partner that has never shown a desire for peace. Israel needs to be focusing on protecting itself on multiple fronts. If history is any indicator, chaos in the Arab States only stops when they all decide to attack a common enemy, Israel. It is partially Obama’s fault that they are all aflame and it is Obama’s fault that Israel has been distracted thus far with a pointless attempt to curry favor with an international community that will never give approval, instead of beefing up the leadership and the IDF in anticipation of what could be another multi-front war. The “Arab Spring” is Obama’s multiple fires and Israel is the wall socket Obama is trying to jam a paper clip into.

The befuddling incompetence of this administration grows by the day as it continues to set fires and fails to put a single one out. Israel would be wise to ignore Obama, John Kerry or any other US Diplomat who claims to know what is best for them in the region. The Americans don’t even know what is best for the Americans in the region. They are that clueless when it comes to the Arab-run Middle East. Israel must heed to words of Robert DeNiro’s Donald Rimgale in the classic movie Backdraft: “Alderman, I have an uncomplicated job: To determine if a fire is arson or not, and if so, to catch the sob doing it. And if my investigative methods happen to muck up the campaign of certain mayor wannabes, I gotta tell ya… I’m not gonna go losing any sleep over it.”