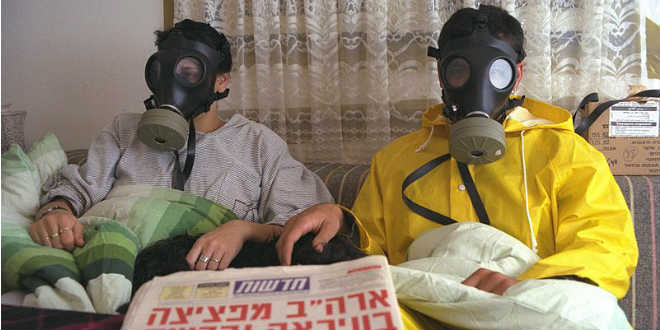 And this day will the princesses of Persia and Media who have heard of the deed of the queen say the like unto all the king’s princes. So will there arise enough contempt and wrath. (Esther 1:18)

As the United States carefully weighs their options in responding to Syrian President Bashar Assad’s most recent chemical weapons attack on his own people, Syrian state-sponsor, Iran, warned that Israel would be the first casualty of the fall-out on Monday. According to the Jerusalem Post, Hossein Sheikholeslam, a senior Iranian parliamentarian said “no military attack will be waged against Syria. Yet, if such an incident takes place, which is impossible, the Zionist regime will be the first victim of a military attack on Syria.”

A number of other Iranian leaders threatened the West against retaliating on Monday. A commander of Iran’s Basij force, Brig.-Gen. Mohammad Reza Naqdi, said the US was incapable of waging war on Syria.“They [the Americans] are not able to enter a new war in the region because neither do their economic capabilities allow them nor do they have a proper morale and high spirit for starting a new war, hence this capability is not envisaged for them,” Naqdi said in Tehran on Monday, according to the Iranian Fars News Agency. Also on Monday an Iranian Foreign Ministry spokesman claimed the US was going to implement an Iraq-like war in Syria. “Presently, the Western countries are after implementing the same scenario (as the one applied in Iraq) in Syria when they accuse that country of using chemical weapons,” Abbas Araqchi told Iran’s Tasnim News Agency.

With the possibility that Israel will be attacked in response to an American strike, a demand for gas masks in the Jewish State has risen dramatically since Sunday. According to The Times of Israel, Israeli post offices reported receiving a 300% increase in requests for protection kits on Sunday and Monday. More than twice as many people than average approached the distribution points themselves. Haim Mazaki, a senior manager at the Israel Postal Company, told Channel 10 News that the increased demand also caused the operating system in one of the service centers to crash, the Times reported.

According to numbers released by the government, only 60% of Israelis currently possess gas masks.

In its first official time stating unequivocally that the Syrian government was behind the chemical attack, US Secretary of State John Kerry took to the airwaves on Monday, saying, that chemical weapons attacks were “inexcusable” and “undeniable,” that they defied “the code of morality” and should “shock the conscience of the world.” He called the killing of innocent women and children a “moral obscenity” and reiterated — in what appeared to be a direct threat to the Assad regime — that there must be accountability for the use of such weapons, according to The Times of Israel.

In his address at the State Department, Kerry took a shot at Russia as well, who has been insiting that the Americans do not have enough evidence to justify a retaliatory attack on Assad. Kerry said that anyone who thought the evidence of a chemical attack was “contrived” or fabricated “must check their moral conscience. Everything the images are screaming at us is real,” he said. “Chemical weapons were used in Syria. We know that the Syrian regime maintains custody of these chemical weapons. We know that the Syrian regime has the capacity to do this with rockets. We know that regime has been determined to clear the opposition from those very places where the attacks took place. With our own eyes we have all become witnesses.

To combat this very issue, US President Barack Obama has ordered the release of new evidence ahead of a limited military operation. According to The Times of Israel, The Obama administration will seek to provide concrete evidence that President Bashar Assad’s forces have used chemical weapons, in order to justify American military intervention.

Two administration officials said the US was expected to make public a more formal determination of chemical weapons use on Tuesday, with an announcement of Obama’s response likely to follow quickly. The officials insisted on anonymity because they were not authorized to publicly discuss the internal deliberations.

US action will last only one or two days and originate from American vessels already stationed in the eastern Mediterranean, the report said, but won’t take place before the completion of a detailed intelligence assessment and an analysis of the legality of such a move, and before US allies and Congress are consulted, according to the Times.