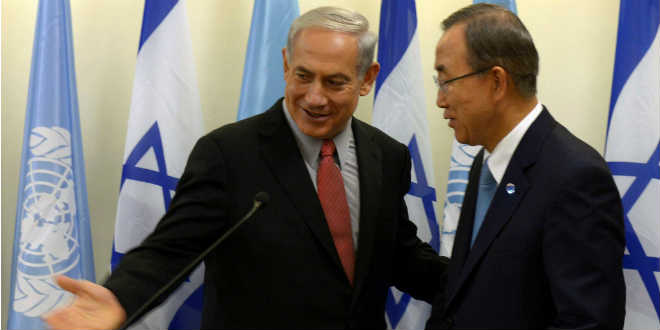 Thou shalt not wrest judgment; thou shalt not respect persons; neither shalt thou take a gift; for a gift doth blind the eyes of the wise, and pervert the words of the righteous. Justice, justice shalt thou follow, that thou mayest live, and inherit the land which the LORD thy God giveth thee. (Deuteronomy 16:19-20)

In his visit to the region to show support for the ongoing negotiations between Israel and the Palestinian Authority, United Nation Secretary General Ban Ki-moon made a seemingly obvious yet significant confession. Ban was quoted Friday during a meeting with Israeli college students saying that “unfortunately because of the conflict, Israel has been weighed down by criticism and suffered from bias – sometimes even discrimination.”

However, according to the Jerusalem Post, Ban appeared to backtrack from that statement on Monday upon his return to the UN, much to the dismay of Israeli officials. When asked about the matter during a press conference, Ban said, “I don’t think there is discrimination against Israel at the United Nations. The Israeli government maybe raised this issue that there’s some bias against Israel, but Israel is one of the 193 member states,” he added. “Thus, Israel should have equal rights and opportunities without having any bias, any discrimination. That’s a fundamental principle of the United Nations charter. And thus, Israel should be fully given such rights.”

According to the JPost, one Israeli official said that when Ban spoke about a bias against Israel in the organization he heads he “spoke the truth and showed moral leadership.”

Another Israeli official said that when Ban spoke about a bias against Israel in the organization he heads he “spoke the truth and showed moral leadership.”

On Friday morning, the Prime Minster’s Office of Israel announced that PM Benjamin Netanyahu will address the UN General Assembly for the third straight year, with his speech once again focusing on Iran, according to the Jerusalem Post. The PMO said Bibi is slated to give his speech on September 30.

In last year’s address, Bibi famously brought out a cartoon-like picture of a bomb demonstrating with a marker the different red lines Iran’s nuclear pursuit have and will cross. Despite being ridiculed at the time, the Washington Post editorialized that Netanyahu’s explicit setting of a red line in that speech “appears to have accomplished what neither negotiations nor sanctions have yielded: concrete Iranian action to limit its enrichment.”

Thus far there has been no announcement that the Israeli PM would meet with US President Barack Obama or any other American official.