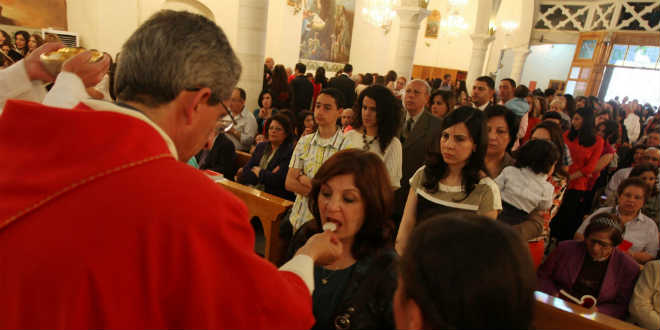 Hallelujah; for it is good to sing praises unto our God; for it is pleasant, and praise is comely. (Psalms 147:1)

As violence against Christian members and institutions continues to skyrocket on the streets of Egypt, a number of churches have decided to cancel services indefinitely this week, according to The Times of Israel.

On Sunday, the churches in Minya, located in northern Egypt, canceled their Sunday Mass for the first time in a almost two millennia.“We did not hold prayers in the monastery on Sunday for the first time in 1,600 years,” Priest Selwanes Lotfy of the Virgin Mary and Priest Ibram Monastery in Degla, just south of Minya, told the al-Masry al-Youm daily.

He said supporters of ousted president Mohammed Morsi destroyed the monastery, which includes three churches, one of which is an archaeological site. “One of the extremists wrote on the monastery’s wall, ‘donate [this] to the martyrs’ mosque,’” Lotfy added.

The usually quiet Christian community in Egypt, made up mostly of Copts, have been more politically involved since the toppling of Morsi as they sought to ensure fair treatment following the change in leadership. They have been regularly targeted by Islamic extremists in region since the coup began.

Last Wednesday the Egyptian military carried out a clear-out of two pro-Morsi camps that were protesting peacefully. The ensuing violence has brought about roughly 900 casualties, including a large spike in attacks of Christian members and buildings by radical Islamists. According to the Times, approximately 58 churches have been looted and set ablaze as of Sunday. The campaign seems to be a warning to Christians outside Cairo to stand down from political activism. Three Christians have been killed in recent weeks, including a taxi driver who strayed into a protest by Morsi supporters in Alexandria, another man who was shot to death by Islamists in the southern province of Sohag and a young girl on her way home from Bible study at her Uncle’s church, according to security officials, who spoke on condition of anonymity because they weren’t authorized to release the information.

However, the tactics of intimidation have thus far appeared to embolden many of the Christian communities in Egypt, rather than beat them into submission. Egypt’s Coptic Christian church on Friday renewed its commitment to the new political order, saying in a statement that it stood by the army and the police in their fight against “the armed violent groups and black terrorism.”

In a statement Saturday, the Coptic Pope Tawadros II, said the Muslim Brotherhood was fomenting sectarian clashes around Egypt. The pope has reportedly been in hiding since rioters began targeting the minority group.

Early on Tuesday morning the Muslim Botherhood suffered a significant setback after one of its supreme leaders, Mohammed Badie, was arrested by the Egyptian military. According to The Times of Israel, The Egyptian Interior Ministry posted a number of pictures of Badie on its Facebook page.

“Carrying out the decisions of the public prosecutor to arrest and bring forward the ‘general guide’ of the Muslim Brotherhood, Mohamed Badie, and through collected information and observation of movements, it was possible for the criminal search apparatus under the direction of Cairo’s security (services) to arrest him,” a caption with the picture read, according to a Reuters translation.

Also on Tuesday, Turkish Prime Minister Recep Tayyip Erdogan fingered Israel for the orchestration of the Morsi overthrow. “Israel is behind the coup in Egypt, we have evidence,” Erdogan was quoted as saying in the Turkish daily Today’s Zaman on Tuesday. The Turkish premier cited a conversation he had with a “French Jewish intellectual” who predicted that the Muslim Brotherhood would not be permitted to rule even if it won an election “because democracy is not the ballot box.”

Erdogan has a growing record of inciting anger against Israel. According to the Jerusalem Post, a large number for his recent remarks could even be considered anti-Semitic in nature, including accusing an “interest rate lobby” of masterminding protests by crowds in Istanbul. He has also likened Zionism to fascism, and he has routinely accused Israel of waging a campaign of “genocide” against Palestinians.