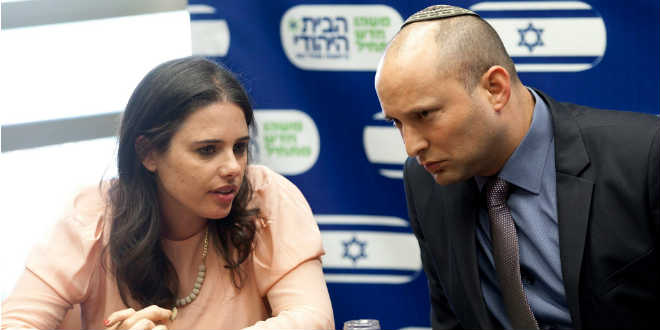 He that worketh deceit shall not dwell within my house; he that speaketh falsehood shall not be established before mine eyes (Psalms 101:7)

On Thursday, Israeli Knesset Member Ayelet Shaked, of the right-wing party Bayit Hayedhud (Jewish Home)i, hammered US Secretary of State John Kerry in a letter for his part in pressuring Israel to release prisoners with blood on their hands. Shaked sent the letter to top US Diplomats as well as released it to the press, according to The Times of Israel.

Shaked blasted Kerry, directly criticizing him saying, “you are not only being extremely hypocritical, but are actually dabbling in experimentation and gambling, by putting me and my children’s lives at risk”. Shaked added that, “your forcing us to release these terrorists with actual blood on their hands is made all the more absurd, cynical and vicious by the fact that your country refuses until this day to release Jonathan Pollard from jail, despite the unprecedented term he has served thusfar”. She concluded the scathing letter by pointing out to Kerry that “the past four years in Israel have been as quiet and peaceful as ever. Therefore, I suggest to you that you perform your job in a much more effective and relevant fashion by focusing your attention on Syria and Egypt, where people are actually getting slaughtered”.

According to The Times of Israel, the letter is remarkable due to its timing, seemingly undercutting Israeli Prime Minister Benjamin Netanyahu as peace negotiations between Israel and the Palestinian Authority continue. However, the criticism continues to pour out against Netanyahu from all corners of the Israeli and Jewish world, including a letter from Jonathan Pollard himself, the first time he has spoken in his 28 years of imprisonment, in an op-ed sent to the Jerusalem Post. Pollard wrote: “Over the last six decades, Israel’s leaders and its judiciary have practiced the art of political expedience to such a degree that Israel is now the first and only country in the world to hold the following dubious ‘honors’”. He then went on to list a number of concessions Israel has made in the last few years, including “Israel is the only country in the world ever to voluntarily expel its own citizens from chunks of its homeland in order to hand over the land to its enemies” as well as “Israel is the only country in the world to restrain its military from rescuing a wounded soldier, for fear of provoking the enemy and risking its approval ratings with the world. The soldier, injured by enemy gunfire at a Jewish holy site, slowly bled to death needlessly while the IDF stood by and watched.”

Pollard, echoing Shaked, added in his Op-Ed “In summary, Israel has the dubious distinction of being the only country in the world so befuddled by moral ambiguity that it is willing to dishonor its dead, betray its bereaved, and disgrace its citizens for the sake of political expediency.

Earlier this week, the State of Israel began the staged release of some of the worst murderers and terrorists the world has ever seen. Twenty-six out of the 104 murderers scheduled for release went free on Tuesday. Many are serving multiple life sentences for their heinous crimes and their many victims. The blood of their victims cries out from the grave at this affront to human decency. Their cries go unheard.”

Shaked, a Knesset freshman and close confidant of Bayit Hayehudi chairman Naftali Bennett, is quickly making a name for herself as a hawk who is not afraid to speak out. Earlier this week she called for the implementation of the death penalty for terrorists in Israel. She said the measure was necessary to ensure that terrorist murderers are “never released.”