Last Weeks Poll Results: “NO” on Pride Parade in Jerusalem 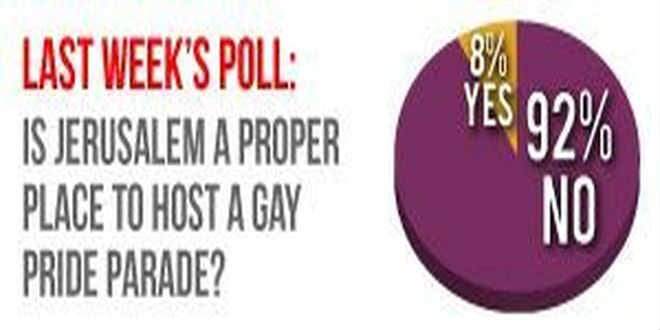 Poll Results for the Week of August 6-13 Poll Question: Is Jerusalem a proper place to host a gay pride parade?

From the Editor’s Desk:

We are all commanded to emulate the traits of the Lord. Two of those wondrous traits is the that of “respect” and “tolerance”. It is written in 2 Kings 13:23 “But the LORD was gracious unto them, and had compassion on them, and had respect unto them, because of His covenant with Abraham, Isaac, and Jacob, and would not destroy them, neither hath He cast them from His presence until now.” The Lord does not abandon anyone, because he has respect and compassion for all of his creations.

Now, usually, the usage such words with regard to the homosexual community are brought in support of their actions, but that is not the case here. While Israel’s status as a democracy is of vital importance, it can not override Israel’s identity as the Jewish home. One of the caveats that comes along with linking religion to a governance (a.k.a. an Ethnic-Democracy), is that respect and tolerance must be shown to the sensitivities of those who hold the Land in a higher holy regard.

There is a bustling pride parade in Tel Aviv every year that takes place with little resistance. Even people who are opposed to having any type of pride parade  in the Jewish state, myself included, because, after all, every inch of the Land is holy, can agree that if democracy forces Israel to allow such an event, it is better it not be in a city as holy as Jerusalem.

When the LGBT community feels the need to hold a pride parade in Jerusalem the insulted are right to feel that it is being done, as it is said in Hebrew, “Davka”, or “intentionally to incite”.

That being said, EVERYONE is commanded to model themselves after the Lord and if they want to show their protest to the pride parade, they too must too show it in a respectful manner. We are also commanded to not profane the name of the Lord with our actions, and I believe that throwing trash and burning tires falls under that category.

However, tolerance is a two-way street, something I think the LGBT community has not always acknowledged, and holding a pride parade in Jerusalem, when it is known that it will harm the sensitivities of many, observant and not, was and is wrong.

Be Sure to Vote in This Week’s Poll – Let Your Voice Be Heard!

Is the Palestinian Authority a trustworthy partner for peace?