Iron Dome Intercepts Missile in Eilat for the First Time 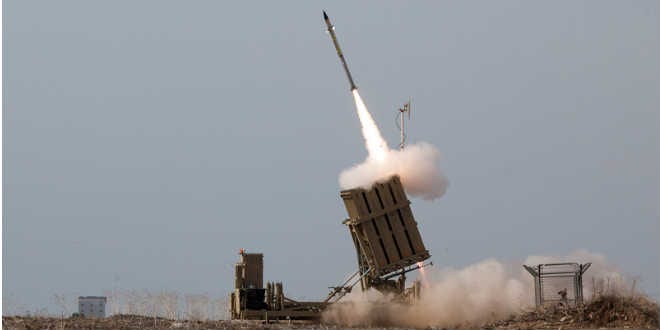 Thou shalt not be afraid of the terror by night, nor of the arrow that flieth by day (Psalms 91:5)

In what is the most recent event in the continuing trend of escalating threats to Israel from the south, the Iron Dome, Israel’s impressive  anti-rocket battery, shot down a missile headed for the resort city of Eilat for the first time since its placement in there, according to the Jerusalem Post.

While residents reported hearing a number of blasts following the siren it is still unknown at this point in time whether or not other rockets fell in open areas surrounding the city or not.

According to Israel’s Channel 10 a jihadist group known as Ansar Bayt al-Maqdis took credit for launching a number of rockets at Southern Israel on late Monday night. “This was a response to the latest crimes by the Jews, who used a drone to attack and kill four of our fighters in Sinai,” the organization said. “The fighters managed to bomb occupied ‘Um Rashrash’ [as Eilat is known in Arabic], with Grad missiles. The attack sowed fear among the criminal Jews, who were forced into underground bomb shelters.”

The attack comes days after the Sinai-based terrorist organization said an Israeli drone fired a missile and killed four of its members who were plotting to fire a rocket at Israel. “Our heroes became martyrs during their jihadi duties against the Jews in a rocket attack on occupied lands,” the Ansar Bayt al-Maqdis organization said on a jihadist website.

While five security sources told Rueters that Israel had carried out the attack, the Egyptian armed forces have vehemently denied those claims. Israel has remained quiet on the issue.

Ansar Bayt al-Maqdis criticized the Egyptian military for what it called its repeated cooperation with Israel.

Defense Minister Moshe Ya’alon issued a statement on Saturday stressing that Jerusalem “respects Egypt’s full sovereignty.” Israel is aware of Egypt’s stepped-up activities to combat terrorism in Sinai, and the “Egyptian army is fighting first and foremost to protect Egyptian civilians, as well as Egyptian sovereignty,” he said. “We will not allow rumors and speculation, as they developed over the past 24 hours, to harm the peace agreement.”

On Friday, Ma’an quoted an Egyptian security source as saying the IDF’s decision to close the airport was a precautionary measure based on Egyptian intelligence that terrorists in Sinai were plotting a rocket strike.

The IDF instructed the Israel Airports Authority to close the airport in the southern city due to a “security assessment,” but it did not release any further details.

According to the Egyptian official cited by Ma’an, Salafi Islamists in Sinai planned to target Israel with shoulder-launched missiles with a range of 70 km., which would put them well in range of the airspace over Eilat Airport.