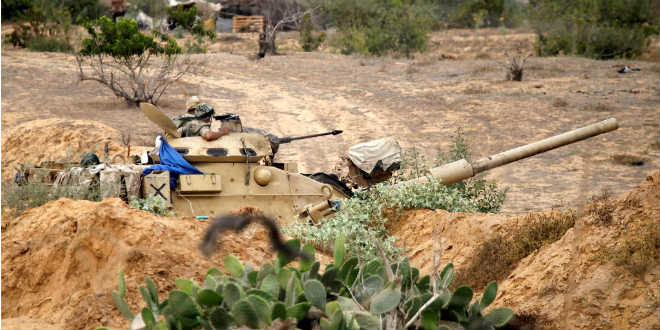 And they journeyed from Rephidim, and pitched in the wilderness of Sinai (Numbers 33:15)

A drone attack that killed five al-Qaeda-linked terrorists on Friday has been pinned on Israel by a number of Egyptian officials as well as the international media. If the attack was, in fact, carried out by Israel, it would mark an unprecedented increase in Egyptian-Israeli security against militants in the lawless border zone.

Israel had originally stayed silent on the attack, but on Saturday Defense Minsiter Moshe Ya’alon  issued a statement stressing that Jerusalem “respects Egypt’s full sovereignty.” He added that Israel is aware of Egypt’s stepped-up activities to combat terrorism in Sinai, adding that the “Egyptian army is fighting first and foremost to protect Egyptian civilians, as well as Egyptian sovereignty.”

“We will not allow rumors and speculations, as they developed over the past 24 hours, to harm the peace agreement,” Ya’alon added.

Details of the strike continue to remain unclear. A number of Egyptian security sources had told Reuters that the attack was carried out by Israel while an Egyptian army spokesman issued a statement on Facebook several hours after the strike denying Israel was behind it, according to the Jerusalem Post. Additionally the number of Jihadists killed is still being debated, with some sources refuting the initial report of five fatalities, claiming that just four had been killed.

Palestinian news agency Ma’an reported that a large explosion was heard on Friday afternoon in Rafah, near the Kerem Shalom border crossing. The Egyptian military said there had been two explosions west of the international border two miles from Al Agra on Friday evening but gave no further details.

According to the JPost, Egyptian soldiers were searching the area in the north Sinai region to find out more, Egyptian army spokesman Ahmed Ali said in a statement.

AFP cited Egyptian sources as saying the IDF coordinated the attack with the Egyptian authorities, but an Egyptian military spokesman denied that report as well.

“The claim that there exists coordination between the Egyptian and the Israeli side in this matter is a matter completely void of truth,” he said.

The IDF instructed the Israel Airports Authority to close down the airport in the southern city, Eilat, which borders Egypt due to a “security assessment.” The IDF did not release any specific details on the security reasons which prompted the closure.

According to the Egyptian official cited by Ma’an, Salafi terrorists in Sinai planned to target Israel with shoulder-launched missiles with a range of 70 km, which would put them in well in range of the airspace over Eilat Airport.

On Wednesday, the Egyptian army announced that it had killed 60 terrorists in the Sinai Peninsula in the month since the military overthrew Islamist president Mohamed Morsi. Citing widening “terrorist operations” in “recent times,” the Egyptian military said it was conducting an intensified campaign in Sinai in coordination with the country’s Interior Ministry to crack down on terrorists who “threaten Egyptian national security.”

Since the deposition of Morsi on July 3, terror attacks have escalated against Israel from the Sinai peninsula

Ya’alon said last month that Egypt has inserted additional military forces – including assault helicopters – into Sinai after receiving permission from Israel, in line with the peace treaty between the two countries, the Post reported.

Maj.-Gen. (res.) Yisrael Ziv a former head of IDF Operations, said on Thursday night that he “couldn’t rule out the possibility” that there was a connection between the closure of the Eilat Airport and the US decision this week to shut a number of embassies in the region due to al-Qaida terrorist threats.

He suggested that a terrorist plot might have originated on the Egyptian side of the border, in the lawless Sinai Peninsula.

“It appears that we received information in recent hours that something is happening in Sinai,” Ziv told Israel’s Channel 1 Television.

“Sinai has become a serious problem from a security point of view. Like Afghanistan, it has become an unmanageable territory.”