US Posts In Israel to Reopen After Terror Threat Shutdown

Home » US Posts In Israel to Reopen After Terror Threat Shutdown 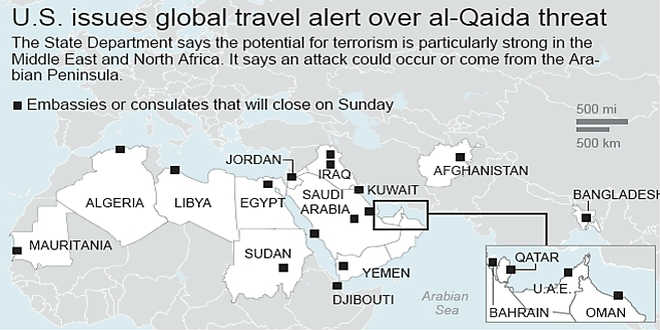 “O thou that dwellest in the covert of the Most High, and abidest in the shadow of the Almighty; I will say of the LORD, who is my refuge and my fortress, my God, in whom I trust, that He will deliver thee from the snare of the fowler, and from the noisome pestilence” (Psalms 91:1-3)

The US Embassy in Tel Aviv, as well as the missions in Jerusalem and Haifa were reopened on Monday after a “Global Travel Alert Warning” was issued by the State Department, as well as deciding to close a large number of US embassies and consulates over the weekend, according to Ynet.com. The travel alert expires on August 31 according to the Times of Israel.

Despite the reopening of the Israel posts, the State Department has decided to keep 19 other facilities in Muslim world closed due to “an abundance of caution”. She said the continued closures are “merely an indication of our commitment to exercise caution and take appropriate steps to protect our employees, including local employees, and visitors to our facilities.”

State Department spokeswoman Jen Psaki said the decision to keep the embassies and consulates closed is “not an indication of a new threat.

The alert was the first of its kind since an announcement preceding the 10th anniversary of the Sept. 11, 2001, terrorist attacks. “There is a significant threat stream, and we’re reacting to it,” said Gen. Martin Dempsey, chairman of the Joint Chiefs of Staff. He told ABC in an interview that aired Sunday that the threat was “more specific” than previous ones and the “intent is to attack Western, not just U.S. interests.”

According to The Times of Israel, the warning said al-Qaida or its allies might target either U.S. government or private American interests. The New York Times reported Friday night that American officials said the U.S. had intercepted electronic communications among senior operatives of al-Qaida. The State Department said the potential for terrorism was particularly acute in the Middle East and North Africa, with a possible attack occurring on or coming from the Arabian Peninsula.

“Current information suggests that al-Qaida and affiliated organizations continue to plan terrorist attacks both in the region and beyond, and that they may focus efforts to conduct attacks in the period between now and the end of August,” a department statement said.

Sen. Saxby Chambliss said “the chatter” intercepted by US intelligence agencies led the Obama administration to shutter the embassies and consulates and issue a global travel warning to Americans.

“Chatter means conversation among terrorists about the planning that’s going on– very reminiscent of what we saw pre-9/11,” Chambliss told NBC’s “Meet the Press.” “This is the most serious threat that I’ve seen in the last several years,” he said.

Rep. C.A. Dutch Ruppersberger, the top Democrat on the House of Representatives Intelligence Committee, told ABC’s “This Week” that the threat intercepted from “high-level people in al-Qaeda in the Arabian Peninsula” was about a “major attack.”

Many believe the Obama Administration is now taking extra caution after the Benghazi debacle last year in which four Americans were killed and three were injured.