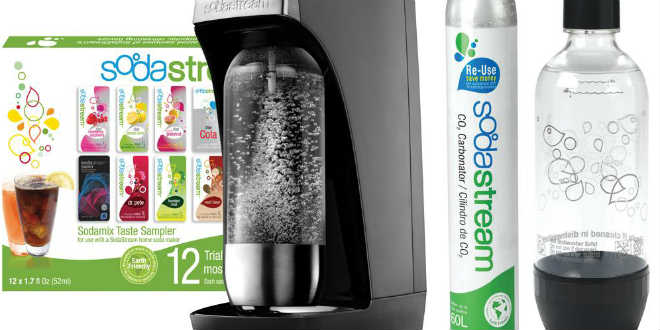 “But let justice well up as waters, and righteousness as a mighty stream” (Amos 5:24)

While stocks of Israeli home-soda maker company Sodastream (SODA) are up, so are calls for boycotting and divesting from the Ma’aleh Adumim-based company.

Sodastream markets machine for carbonating water at home, alongside refillable carbon dioxide gas canisters and special bottles for holding the soda.  They also make flavored syrups to turn regular soda water into cola, lemon-lime soda and other flavors.  Sodastream merged with Israeli soda company Soda Club in 1998 and was re-branded to emphasize its environmental benefits.  It has since partnered with several major food companies, such as Kraft, to market popular flavor syrups, including Kool-Aid, Country Time lemonade and Crystal Light flavors.  Its rising popularity across the globe — 1 in 4 Swedish households has a Sodastream machine, for example — has pushed its profits and stock values higher.

During this year’s Superbowl, Sodastream produced a much-discussed ad in which generic bottles of carbonated drinks exploded every time someone activated a Sodastream machine.  The message: each machine keeps several cases worth of waste out of landfill, something pre-bottled drinks cannot claim.  The Sodastream machine appeals both to the environmentally and financially conscious, as after the initial investment in the machine, filling bottles at home costs mere pennies compared to buying bottled soda.

However, there are some that are less impressed with the company.  Sodastream has been targeted recently by various Boycott, Divest and Sanction (BDS) supporters for operating primarily in Mishor Adumim, the industrial park of Ma’aleh Adumim, a Jerusalem suburb located beyond the 1967 borders.  Although Ma’aleh Adumim is one of the large settlement blocs the Israeli government intends to retain in any future agreement with Palestinians, it is seen by many as “illegal under international law and [an] obstacle to peace.”  In 2010, the EU ruled that Sodastream products could not be marked “Made in Israel” because the EU does not recognize Israel’s authority over Judea and Samaria.

In response to the BDS campaign, Sodastream produced a PR video entitled “Building Bridges, not Walls,” which detailed the company’s efforts to set the stage for peace by providing decent, respectable employment opportunities for Palestinians and by bringing Israelis and Palestinians together, encouraging normal relations between them.  Among the benefits outlined by the company were designated spaces for Arab prayers, higher wages than offered in PA-based businesses, and upward mobility within the company, regardless of background.  The company employs about 900 Palestinians, including about 500 from within the PA-controlled region of the West Bank.  Despite this, activists claim the company is merely exploiting cheap labor and perpetuating Israel’s “illegal occupation.”

In addition to the Ma’aleh Adumim facility, the company operates two more factories within Israel and ten others worldwide.  It is investing NIS 130 million (about $36.5 million US) in constructing a fourth Israeli facility in the Negev region, which is set to employ 1,000 people, including many Bedouin.  Construction there began in 2011.