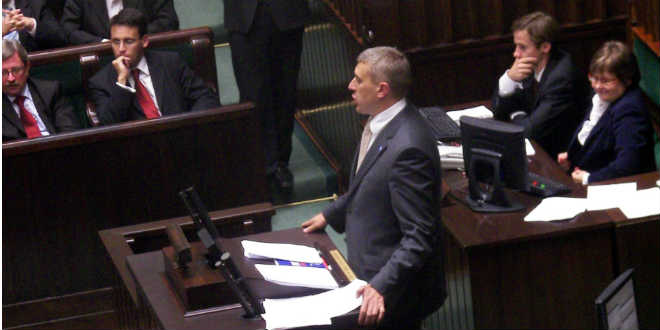 “Thou shalt kill of thy herd and of thy flock, which the LORD hath given thee, as I have commanded thee” (Deuteronomy 12:21)

It seems like an ironic choice, but he may just be the best man for the job.  The European Jewish Association has hired a lawyer with a history of anti-Semitic ties to fight the Polish ban on kosher ritual slaughter.

The Times of Israel has reported that Roman Giertych, former leader of The League of Polish Families, a far-right political party with anti-Semitic policies, was hired to present a legal challenge to Poland’s recent decision not to overturn its ban on ritual slaughter.  The ban against certain forms of slaughter, including kosher ritual slaughter, was enacted at the end of the last calendar year and took effect in January.  A motion to overturn the ban was rejected earlier this month.

Giertych’s League of Polish Families won eight percent of the vote in the 2001 and 2005 elections, but collapsed after that.  The party is the self-appointed successor to the pre-WWII National Democratic party, whose aims included forcing Jews out of Polish social and economic life.  Although the revived party was associated more with anti-gay and anti-European policies, its members are on record for various anti-Semitic slurs, including denial of Auschwitz’s use as a death camp.  Giertych’s father was also a member of the party, who made anti-Semitic comments during his tenure in Parliament.  Giertych’s grandfather was a member of the original National Democratic party.

In 2006, Giertych promised to expel from the party anyone who made anti-Semitic comments, but former Israeli ambassador to Poland David Peleg refused to work with Giertych on Holocaust-related issues due to his association with the party.  At the time, Giertych was serving as education minister and deputy prime minister.

Giertych has acknowledged his family’s anti-Semitic past, but says, “It is not the history of myself. There is no anti-Semitism in my life.”

Despite Giertych’s claims, Philip Carmel, a spokesman for the European Jewish Congress, called the Giertych appointment “ill-advised” and “misconceived.”

“It looks extremely weird that of all the lawyers in Poland, they picked one who was a leader on the far-right,” he says. “I wouldn’t say he is personally anti-Semitic, but the League of Polish Families is not the kind of political group known for its closeness to the Jewish community.”

The director of the European Jewish Association, Rabbi Menachem Margolin, defended their choice.  He called Giertych “an excellent lawyer” who “has good contacts in the corridors of power where this decision will be made.”

“Some of our best friends in the European Parliament are former anti-Semites who want to fix the past and help us.

“I don’t see what the sin is in trying to reach a solution. If he has the right connections, not to take him on would be ridiculous. The exact same organizations [which are critical of EJA] would speak to any anti-Semite in order to reach a solution.”

Carmel raised suspicions that Giertych’s interest in the case is political, as he has associations with the meat industry which will suffer from the ban.  However, the greater issue is whether the European Jewish Association, based in Brussels, has any business being involved at all.  He called the move “interference” with the local Jewish community, which was also directed to approach the constitutional court regarding the ban.

President of the Union of Jewish Religious Communities in Poland, Piotr Kadlcik, expressed surprise over the appointment of Giertych, who is not a constitutional lawyer.  Kadlcik did not think his political connections would be useful.  he reiterated Carmel’s concern about the EJA’s involvement.

This law affects us directly,” said Kadlcik, and should be left to the Polish Jewish community to fight, without the interference of unsolicited outside parties.

Margolin, however, disagreed.  “This is not an internal Polish matter but a European-Jewish one,” he said.  A successful Polish ban on kosher slaughter could encourage anti-Semites to put pressure on their governments and lead other European countries to enact similar bans.  Margolin also pointed out the failure of the local community to reverse the ban already.

Giertych, meanwhile, stated that as a practicing Catholic, his interest in the matter was a matter of religious freedom.  “We have a very long tradition of life together with Jews, there is no reason why they decided to change the rules of coexistence… No work was done to properly explain to [the ruling Civic Platform party] that it’s a serious move – a problem of the relationship between Poland and the Jewish minority.”