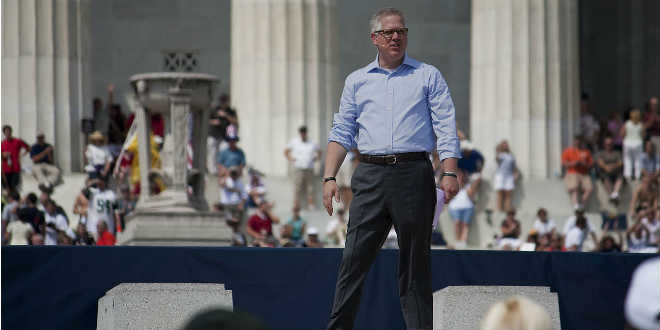 “But if the watchman see the sword come, and blow not the horn, and the people be not warned, and the sword do come, and take any person from among them, he is taken away in his iniquity, but his blood will I require at the watchman’s hand” (Ezekiel 33:6)

Some might say Israeli Prime Minister Benjamin Netanyahu and Congresswoman Michele Bachmann would be tough acts to follow. Not if your name is Glenn Beck.

Beck, the famous passionately conservative TV and Radio personality, delivered the keynote address at the Christians United For Israel Washington Summit on Tuesday to an enthralled crowd, hanging onto his every word. Beck weaved current events and his concerns for the future with biblical sources as he mesmerized the audience with his call to action for Israel.

Beck opened up with a light-hearted joke, noting “Miracles do happen, Pastor Hagee got me to come back to Washington, D.C.,” Beck began with a laugh, but got serious very soon after, stating  “I’m proud to be here. I’m humbled to be here. I usually take about five minutes to write a speech. This one has been weighing on me for quite some time, and I have prayed a great deal on what to say.”

One of the most notable parts of Beck’s stirring presentation was his “be ten times what you can be” segment, where he disclosed, “last time I was here, Mercury One and my wife and I donated $10,000 to help with CUFI on Campus,” he said. “And I spoke to my wife before I came and we were prepared to do $50,000, but I am asking you to be ten times what you think you can be, and I will put my money where my mouth is and write you a check tonight for $100,000.”

Beck also quoted a passage from Ezekiel which he said has greatly influenced him in recent years. The passage, Ezekiel 33:6 states “But if the watchman see the sword come, and blow not the horn, and the people be not warned, and the sword do come, and take any person from among them, he is taken away in his iniquity, but his blood will I require at the watchman’s hand.” Beck followed this quote by warning “It is on just a few that are awake to stop this from happening again,” Beck said, picking up the whip from Auschwitz. “Make no mistake, Hitler taught it to the Middle East and they lapped it up.”

But despite the daunting challenges, Beck said he has “faith and knowledge” because he knows God wins in the end.  But for those who think that means they can sit back, he warned: “Make no mistake, [He wins] after we do all that we can do.”