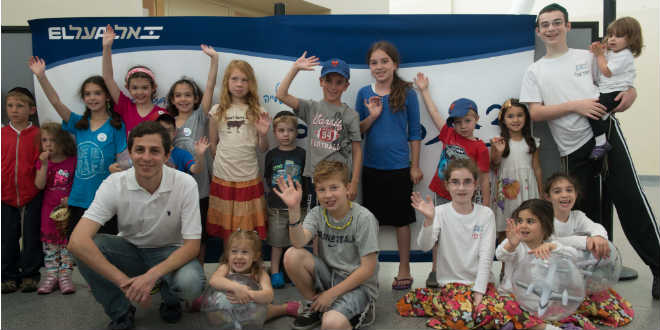 “I am taking the Children of Israel from among the nations to which they have gone; I will gather them from all around and I will bring them to their soil” Ezekiel (37:21)

On Tuesday flight EL Al Flight LY3004 touched down at Ben Gurion Air Port. This was no run-of-the-mill flight.

Flight LY3004, a chartered aliya (immigration) flight from the Israeli immigration organization Nefesh B’Nefesh (Soul to Soul) in conjunction with the Jewish Agency, broke records and even drew a celebrity aboard, as 231 new Israeli citizens stepped off the plane and straight into life in the holy land.

The Tuesday flight set a record for the most youngsters ever on an aliyah flight, with the plane being nearly 50% children. The 106 young Olim will be joining an astounding 989 children what will be making aliyah throughout the year 2013, an increase of 20% from last year.

In addition to the impressive number of children aboard the flight, an impressive demographic of another kind landed on the Tel Aviv tarmac as well. 13 young singles arrived on LY3004 with plans to enlist in the IDF.

“It’s heartening to see American kids link their future with the Jewish state by making Aliyah and immediately joining the IDF,” said American Friends of LIBI Chairman Dr. John Grossman. “LIBI USA is proud to welcome these new soldiers to Israel.” LIBI is the official fund of the IDF and provides for the social, religious and educational needs of Israeli soldiers.

If these heartening words were not enough, previously-captured soldier Gilad Shalit joined the 231 courageous pioneers and shared words of encouragement and praise. Noting that the flight was very emotional for him, Shalit said “The fact that thousands of people are willing to leave their homes and start a new life in Israel is not something to be taken as a matter of course. I wish each and every oleh an easy absorption into their new lives.”

“Gilad Shalit is well liked by the Jews of North America, and we are happy that he agreed to join the ‘Children’s Flight’ in order to help promote aliyah,” said Erez Halfon, Nefesh B’Nefesh Deputy Chairman. “The children’s flight fills us with great optimism,” he added. “These children are the future of the state of Israel and they cause us great excitement in making aliyah.”

Another victory for Nefesh B’Nefesh was the success of their “Go North” and “Go South” programs, done in conjunction with the Keren Kayemet Le’Yisrael Orginization, encouraging people to immigrate to the Israeli periphery to populate and build up social and economic growth in those areas. 41 immigrants from this flight are participating in one of the two programs.

“As we welcome our 35,000th Oleh, it is exciting to see so many children among the modern day Zionist pioneers, who are helping to build and secure the future of the State of Israel”, said Co-Founder and Chairman of Nefesh B’Nefesh, Tony Gelbart. “This new generation is joining young adults volunteering for the IDF and Olim moving to Israel’s North and South to help strengthen the periphery, to infuse the country with renewed passion and idealism.”

“I am happy to welcome over 100 children who are making Aliyah today through Nefesh B’Nefesh and joining us here in Israel,” said Minister of Immigrant Absorption Sofa Landver. “Aliyah from North America is extremely important and makes us stronger as a nation.”

The Chairman of The Jewish Agency for Israel, Natan Sharansky said: “The Jewish Agency, which brings tens of thousands of Olim from across the globe sees Nefesh B’Nefesh as a dedicated partner in this important work. The children and their parents who are arriving on this Olim flight from North America represent the future of Israel and every one of them strengthens Israeli society.”