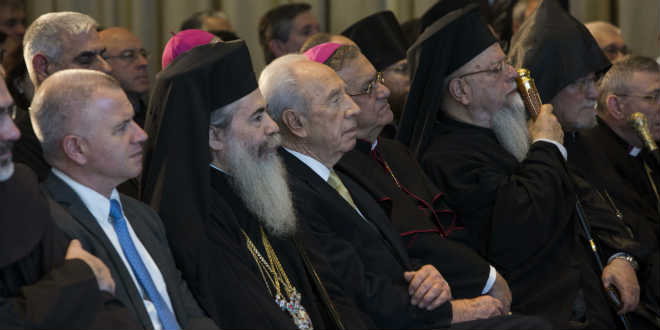 On Monday, leading Christian clerics from the various denominations met to discuss the pressing issues of today facing Christians living in Israel today.On the agenda was housing and employment opportunities, bettering the understanding between their communities and Israeli ones and their position on the peace process.

The meeting, sponsored by the Government Press Office, held in the Old City of Jerusalem, brought together figureheads from the Lutheran, Latin, Greek Orthodox and Evangelical sectors along with a number of international journalists.

According to a 2012 report by the Central Bureau of Statistics there are 158,000 Christians living in the country, representing two percent of the total population. Of that population, approximately 80 percent are Arabs, with the remainder mostly immigrants from the former Soviet Union who immigrated under the Law of Return.

Many Christians hoped the meeting would help alleviate the current identity crisis many Israeli-Chrisitans have been experiencing as of late. On Monday,  Father Pietro Felet, of the Assembly of Catholic Ordinaries had expressed distress over the diverse denominations in Israel creating confusion as to what the overall community stood for. “We’re having some difficulties in defining ourselves in the Holy Land,” said Felet. “We are not a national church, we are a mixture of Arab Christians, Hebrew-speaking Christians and Christians from the former Soviet Republic. About 45% are Catholic, 40% are Orthodox and 20% fall under the category of ‘other.’”

While the Christian population is growing at a rate of 1.3% annually, it lags behind Jewish and Muslim growth, which is 1.8% and 2.5%, respectively, according to the report.

When discussing the sometimes-tenuous relationship  between Christians and Jews, Father Pierbattista Pizzaballa, of St. Savior’s Monastery in the Old City noted a marked improvement over the past 50 years.