Jews Denied Entry to Temple Mount on 9th of Av 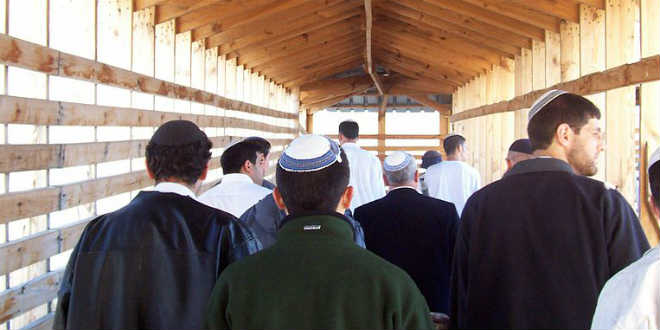 “Why look ye askance, ye mountains of peaks, at the mountain which God hath desired for His abode? Yea, the LORD will dwell therein for ever” (Psalms 68:17)

This past Tuesday,  the ninth of Av, the day Jews the world over commemorate the destruction of the first and second Temples by fasting, police barred entry to the Temple Mount, site of the former Temples, due to fear of Muslim riots.

The Temple Mount, located in the heart of the Old City of Jerusalem, was consecrated by King David.  2 Samuel 24 and 1 Chronicles 21 record the account.  During a plague brought on by a forbidden census, David prays for forgiveness and an end to the death and destruction.  The bible describes an angel standing over the city with an outstretched sword.  When King David reaches the place where the angel was seen, he insists on purchasing it from Arauna (also called Ornan), the Jebusite owner.  He recognizes its holiness and designates it as the site of the future Temple.

The Temple Mount was recaptured by Israel in 1967.  At that time, control over the holy site was turned over to the Waqf, the Muslim religious authority.  In addition to being the location of the Temples, it houses the Dome of the Rock and the Al Aqsa Mosque, two Muslim holy sites.  Generally, Jews require special permission to enter the site, and are forbidden from any expressions of worship there.

Jewish religious authorities accept and even encourage the restrictions, as it is believed that one is forbidden from entering certain areas of the holy site unless one is ritually pure, an impossibility in this day and age.  However, in recent years, a greater interest in the Mount has arisen from those who believe relinquishing Jewish authority over the holiest Jewish site is tantamount to foregoing claims to the land.

On the eve of the ninth of Av, which fell this past Monday, hundreds of Jews, including leading politicians, attempted to gain lawful entry to the site.  They were held for long stretches at the single gate where their entrance is permitted, while Muslims entered unimpeded to mark the month of Ramadan.  As the number of Jews inside the gates began to rise, Muslims physically gathered to prevent their entry.  At that point, police ushered Jewish visitors out of the compound and prevented any further entry.  On Tuesday, the ninth of Av itself, Jewish and Christian visitors were barred entirely from entering.

Multiple MKs have responded angrily to the decision.  As early as Monday, Deputy Defense Minster Danny Danon (Likud) demanded freedom of worship for Jews on the Temple Mount, like that afforded to Muslims.  We must take steps to ensure that Jews are not only able to visit the Temple Mount, but are also able to pray there. I see no logic in allowing Muslims to pray there, but not Jews.

“We do not need a permit from the Muslim world to for every little thing we do. We do what is best for the Jewish people. It is the job of police to take all scenarios into account and ensure freedom of worship for Jews at the Temple Mount,” Danon added.

“Our rights to Jerusalem are eternal, and not dependent on anyone else. During these days when we commemorate the destruction of Jerusalem we can put all the international pressures and threats in perspective. Anyone who believes in our historic rights will not be frightened off by these threats.”

Michael Fuah, of the Jewish Leadership faction of the Israeli Likud Party, accused police Monday of not doing their job.  “Hundreds of Jews who came to the Mount from all parts of the Land of Israel, were kept waiting for a long time at the entrance to the Mount, at the only gate where Jews are allowed to pass, while hundreds of Muslims entered from the other gates without any check or delay.

“As the third group that the police allowed inside entered the Mount, many Muslims began to gather and shout. As usual, instead of preventing the rioters from ascending to the Mount and grouping together, the police quickly informed the Jewish pilgrims that it will not allow them to carry out a full tour of the Mount, and quickly made them leave through the nearest gate,” Fuah said.

Deputy Religions Minister Rabbi Eli Ben Dahan (Bayit Yehudi) was greatly displeased by Tuesday’s decision to prevent Jewish entry and vowed to change the situation in the near future.  “How can it be,” he asked, “that in Israel, in the name of the principles of equality and freedom of religion, Jews can be forbidden from ascending to the Temple Mount, the holiest place for Jews, because of a fear of rioting by Muslims?