Even if your outcasts are at the ends of the world, from there Hashem your God will gather you, from there He will fetch you. Genesis 30:4 (The Israel BibleTM)

A total of 40 future lone soldiers arrive at Ben-Gurion International Airport to serve in the Israel Defense Forces on Aug. 17, 2022. Photo by Shahar Azran.

A total of 225 new immigrants from North America landed at Ben-Gurion International Airport on Wednesday as part of the 63rd Nefesh B’Nefesh chartered aliyah flight through El Al Airlines. The flight was coordinated in partnership with Israel’s Ministry of Aliyah and Integration, the Jewish Agency for Israel, Keren Kayemeth LeIsrael (KKL), Jewish National Fund-USA and Tzofim-Garin Tzabar.

Participants come from a variety of backgrounds, culturally and demographically—hailing from 19 U.S. states and one Canadian province.

The flight also carried a diverse group of professionals who are bringing their unique talents to communities throughout Israel: 27 medical professionals arrived and 72 people on the flight are part of the Nefesh B’Nefesh-KKL “Go Beyond” initiative aimed at developing Israel’s peripheral regions and Jerusalem.

In addition, the flight brought 40 future lone soldiers who will join the 3,500 men and women from around the world who are currently serving as part of the FIDF-Nefesh B’Nefesh Lone Soldiers Program. Once they become Israeli citizens, these men and women will be required to enlist in the IDF, as are all Israeli citizens at the age of 18.

Some 80% of the future lone soldiers on the flight are part of Tzofim-Garin Tzabar, a Friends of Israel Scouts program, Before and throughout their military service, the soldiers are adopted by Israeli communities that serve as their home away from home. Their absorption period includes Hebrew studies, educational tours in Israel, and an introduction to the military structure and the different positions.

Tomer Schorr, director of the Tzofim-Garin Tzabar program, said “these young men and women, in choosing to make aliyah and serve the State of Israel, illustrate the importance of developing and maintaining the strong connection between Israel and North American Jewry.”

“Although I have traveled to Israel many times, it is surreal to finally be landing as an official Israeli citizen,” said Sam Leeman. “Being recognized as Nefesh B’Nefesh’s 75,000th oleh [‘new immigrant’] makes this moment even more meaningful, and I am really looking forward to beginning this new chapter of my life here in Israel as a medical student at Ben-Gurion University of the Negev’s Medical School for International Health and a future physician in the Israeli medical system.” 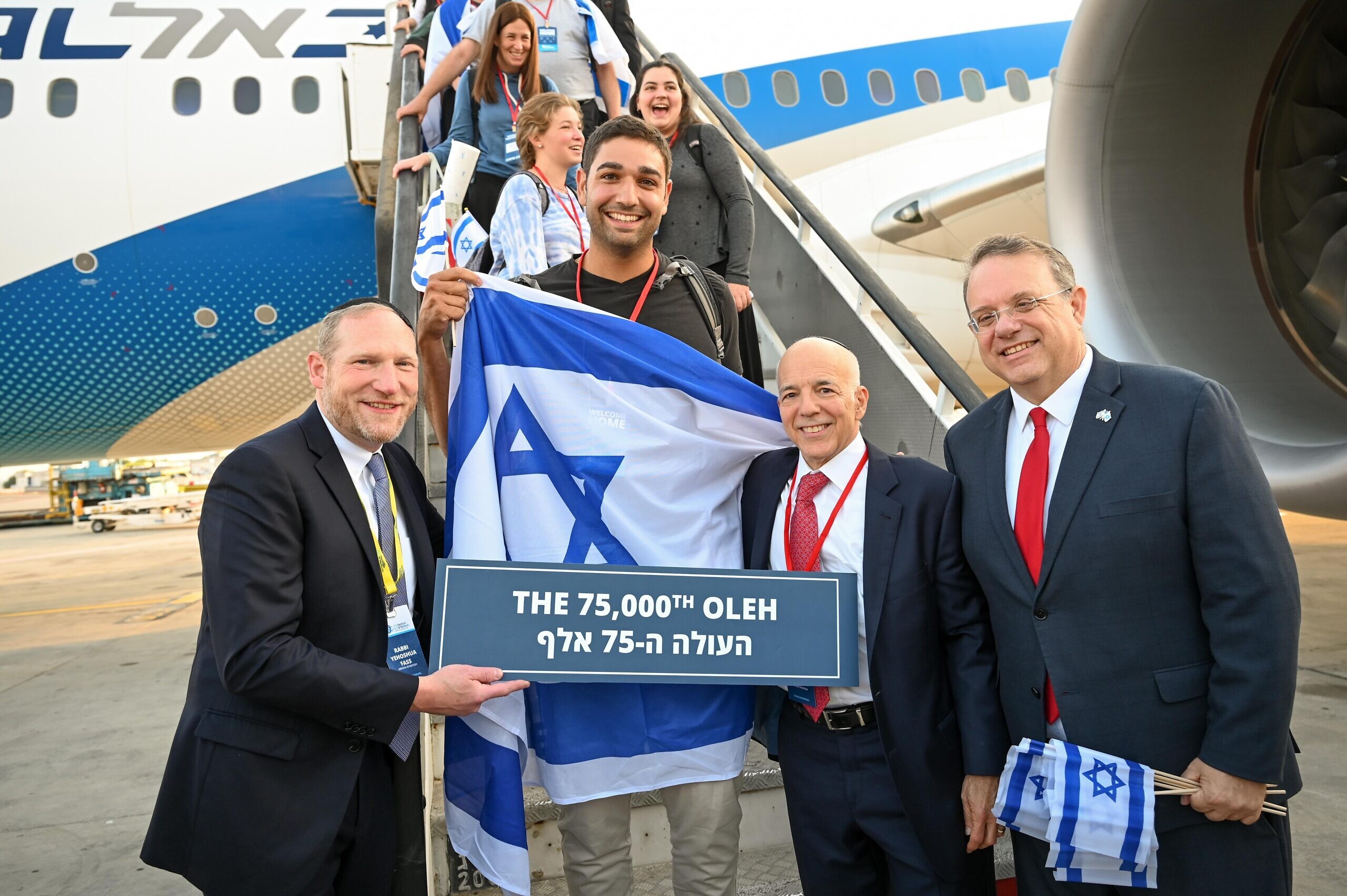 Sam Leeman, the 75,000th “oleh,” or new immigrant to Israel, arrived on a Nefesh B’Nefesh flight that landed at Ben-Gurion International Airport on Aug. 17, 2022. Photo by Shahar Azran.

Rabbi Yehoshua Fass, co-founder and executive director of Nefesh B’Nefesh, said “every aliyah flight carries hundreds of inspiring olim who are fulfilling their dreams of making Israel their home. This summer, we are celebrating the 20th anniversary of Nefesh B’Nefesh as well as our 75,000th oleh, and we remain steadfast in our mission to facilitate, advocate, educate and celebrate the miracle of the Jewish state.”

Nefesh B’Nefesh is expecting to conclude the summer with approximately 2,000 new olim, among them 494 families, 315 single men and women, 205 retirees and 626 children, with the oldest immigrant 101 years old and the youngest a two-month-old baby. The leading cities where they have chosen to settle are Jerusalem, Beit Shemesh, Modi’in-Maccabim-Reut, Tel Aviv-Jaffa, Ra’anana and Netanya. About 330 new immigrants have chosen to settle in the south, the north and the capital of Israel.