A roaring lion and a prowling bear Is a wicked man ruling a helpless people. Proverbs 28:15 (The Israel BibleTM)

In three posts on its official Facebook page, Fatah – headed by PA Chairman Mahmoud Abbas – hurried to endorse and praise the terrorist and his shooting attack carried out last night in Jerusalem. But more than that, Fatah also encouraged additional attacks, urging Palestinians to “save your bullets and use them against the occupation (i.e., Israel).”

Terrorist Amir Sidawi, who later turned himself in to Israeli Police, wounded 8 people including a 35-year-old pregnant woman who was seriously injured. She underwent an emergency C-section delivery, and both she and the baby are in critical condition at the time of writing.

US Ambassador Tom Nides tweeted that he was “deeply saddened to confirm that Americans were injured” in the attack. However, Amb. Nides has not condemned Fatah’s praising of the terror attack that injured the Americans, which would be expected since the US supports and is in close contact with Fatah and PA leader Mahmoud Abbas. Indeed, the US funds Fatah that celebrated the injuring of the Americans via the US’ funding of the PA. The US silence regarding Fatah’s terror support can only encourage Fatah to continue supporting and encouraging terror.

The following are the texts of Fatah’s terror glorifying posts on Facebook: 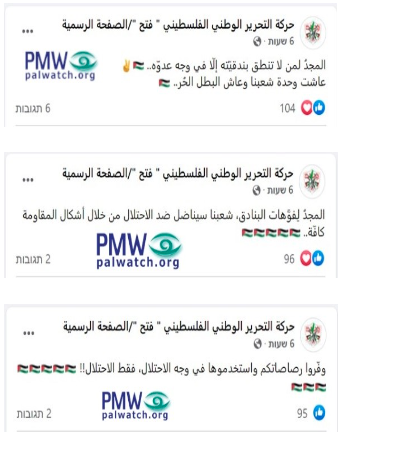 Posted text: “Praise to the one whose rifle only speaks against his enemy.

Posted text: “Praise to the rifle muzzles, our people will fight the occupation with all kinds of resistance.

These posts are in violation of the Israeli anti-terror law and it’s time that the Fatah leaders responsible as well as the Facebook officials based in Israel are investigated by police for terror promotion. Following a complaint by Palestinian Media Watch, the Israeli Police opened a criminal investigation against Facebook Israel for terror incitement but as yet no results have been published. PMW will be sending additional complaints to the police.

Several other terror organizations also expressed praise and support for the shooting attack. Hamas called it “heroic and brave,” the Popular Front for the Liberation of Palestine (PFLP) “praised the operation and said that it ‘proves anew that our people’s resistance is continuing in all forms and throughout the occupied Palestinian land,’ while the Democratic Front for the Liberation of Palestine (DFLP) emphasized that the popular resistance in all its forms continues” and that “the occupation will not be able to extinguish its fire.” [Ma’an, independent Palestinian news agency, Aug. 14, 2022]

The terror supporting Fatah is the dominant member of the Palestine Liberation Organization (PLO). The PFLP and the DFLP are also PLO members. While these groups praise and glorify terror attacks, including those in which US citizens are injured, PA leader Mahmoud Abbas is petitioning US President Biden to cancel the US designation of the PLO as a terror organization. Instead of demanding that the US whitewash terror, the US administration should make it clear that before it will even consider Abbas’s request, the PLO and all its members must desist from their involvement in terror, desist from the terror promotion and desist from terror glorification.

The terms “peaceful uprising/resistance,” and “popular uprising/resistance” are used by PA leaders at times to refer to peaceful protest and at times to refer to deadly terror attacks and terror waves. For example, ‎Mahmoud Abbas defined as “peaceful popular” the murderous terror during the 2015-2016 ‎terror wave (“The Knife Intifada”), in which 40 people were killed (36 Israelis, 1 Palestinian, 2 Americans and 1 Eritrean) and hundreds wounded in stabbings, shootings, and car ramming attacks. Abbas said: “We want peaceful popular uprising, and that’s what this is.” At the time Abbas said this, 14 Israelis had already been murdered.

Amir Sidawi – 26-year-old Palestinian terrorist who shot at Jews at a bus stop and parking lot in the Old City of Jerusalem on the night of Aug. 13, 2022, wounding 8 including a 35-year-old pregnant woman who was seriously wounded. The woman underwent an emergency C-section delivery, with the condition of her baby remaining unclear at the time of writing; according to most reports the baby is in serious condition, although the Israeli paper Haaretz reported the baby had died of its wounds. The terrorist turned himself in to Israeli police after several hours.

The following are longer excerpts of some of the reports cited above:

The Hamas Movement described the operation as ‘heroic and brave,’ and said that it constitutes a natural response to the wild behavior of the occupation soldiers and settlers and their daily crimes against the Palestinian people, its land, and its sites that are holy to Islam and Christianity…

The Popular Front [for the Liberation of Palestine] (PFLP) praised the operation and said that it ‘proves anew that our people’s resistance is continuing in all forms and throughout the occupied Palestinian land.’

It added: ‘The operation was a natural response by our people to the occupation’s escalating crimes.’”

Headline: “The Democratic Front [for the Liberation of Palestine] views the operation in Jerusalem as a natural response to the occupation’s crimes”

“The Democratic Front for the Liberation of Palestine (DFLP) praised the shooting operation in occupied Jerusalem (i.e., attack by terrorist Amir Sidawi, 8 wounded).

In a statement that reached the [independent Palestinian news] agency Ma’an, the DFLP said that the operation is a natural response to the occupation’s incessant crimes against the [Palestinian] people everywhere.

The DFLP added: ‘[Israeli Prime Minister Yair] Lapid is presenting his credentials as a war criminal to a society that espouses racial discrimination in the occupation state, out of the thought that he is capable of extinguishing the resistance and terrifying our people.’

The DFLP emphasized that the popular resistance in all its forms continues (i.e., term used by Palestinians, which also refers to the use of violence and terror), and that the occupation will not be able to extinguish its fire that is awakening in the Gaza Strip and Jerusalem.”