Your rulers are rogues And cronies of thieves, Every one avid for presents And greedy for gifts; They do not judge the case of the orphan, And the widow's cause never reaches them. Isaiah 1:23 (The Israel BibleTM)

Most of Ali Motahhari’s interview was expunged. All that remains is a reference to Khamenei’s edict (fatwa) that the use of nuclear weapons are haram (prohibited).

Ali Motahhari is the son of Ayatollah Morteza Motahhari, one of the founders of the Islamic Republic of Iran and an ideologist who was close to Ali Khomeini and headed the Revolutionary Council during the inception of the Islamic Revolution. He is also the brother-in-law of Ali Larijani, who was chairman of the Iranian parliament for 12 years and a strong critic of former President Mahmoud Ahmadinejad.

Motahhari was considered a senior conservative politician and was the second deputy of the Majlis (parliament) chairman from 2016 to 2019. In 2020, however, he was disqualified from running in the 2020 Majlis elections by the Guardian Council and urged Ali Khamenei to launch an investigation into the mass disqualification of Majlis candidates. Motahhari had begun to voice more pragmatic positions and affiliate with Iran’s conservative-pragmatic camp. In February 2021, he submitted his candidacy for the elections for the Iranian presidency.

He said during an April 25 interview with the Iran Student Correspondents’ Association (ISCA) that contrary to the claims of the Iranian regime, Tehran had sought nuclear weapons from the start of its nuclear program, only changing that policy at a later stage.

“At the beginning, when we launched the nuclear program, our aim was to develop the bomb and improve our deterrent power,” he said.

The goal of achieving a nuclear deterrent had an Islamic religious underpinning, he said, and quoted the Koran (Surah al Anfal): “And prepare against them whatever you are able of power and of steeds of war by which you may terrify the enemy of Allah and your enemy.”

“However,” Motahhari continued, “we failed to keep it a secret, and our confidential reports were revealed by the monafeqin [hypocrites, i.e., the exiled opposition organization Mujahideen Khalq].”1

“If we could have kept it (a secret) until we performed a nuclear test, then it would have been a done deal. Like in Pakistan,” he said. This, he continued, would have improved Iran’s standing in the world.

With regard to Khamenei’s ruling that nuclear weapons are “haram,” or forbidden in Islam, he said that Islam prohibits only the use of such weapons, not their production. However, he continued, “The position of the Leader [Khamenei] right now is that even building [a bomb] is forbidden [emphasis added].”

Asked if his words, which the interviewer noted that nobody in Iran had said officially, might influence the future of the faltering talks in Vienna surrounding a possible return to the nuclear agreement between Iran and world powers, Motahhari said, “No one listens to what I say. I have no official post, and my words are my opinion only.”

However, Motahhari’s words sparked great interest on social networks and in the media, and various state-run Iranian media hastened to deny them. The ISCA, which had initially published the interview, re-edited it, excising the parts involving Iran’s nuclear program and original intention to produce nuclear weapons. The only item the outlet kept was Motahhari’s claim that Khamenei is now opposed to the use of nuclear weapons, and considers it haram.

A short time after the interview was broadcast, a “knowledgeable” source denied Motahhari’s assertions. In an interview with the Nour News Agency, which is affiliated with Iran’s Supreme National Security Council (SNSC), the official said Iran’s nuclear program “never had a military dimension, and that irresponsible people made statements based on a lack of knowledge or their subjective political opinions.”

Iran’s enemies, the official remarked, had been claiming for years that Iran was trying to develop nuclear weapons clandestinely, and their aim was to curtail its peaceful nuclear program.

The Tasnim News Agency quoted Motahhari as retracting his assertion that Iran had sought nuclear weapons, saying in a clarification that “the hypocrites distorted Iran’s involvement with the issue.” Much of the Iranian media quoted Nour and published Motahhari’s clarification.

Motahhari: I was misunderstood

On April 25, Motahhari issued a denial on his Instagram account, saying his words had been taken out of context and that Iran had never sought nuclear weapons.

“What I said was that at the beginning, there were people who believed that building bombs to scare the enemy away was acceptable… the sentence has not been properly reflected by ISCA,” he wrote. 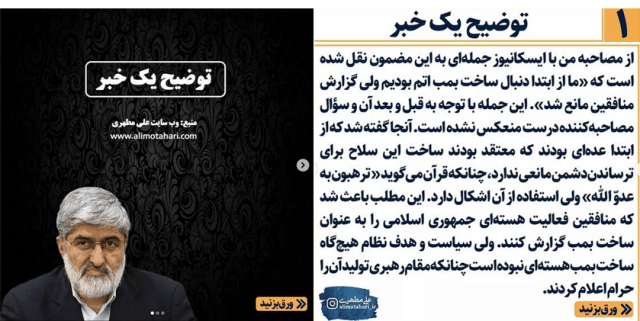 Despite what the Mujahideen Khalq claimed, said Motahhari, “The Islamic Republic has never sought to develop atomic bombs in policy and purpose. The Supreme Leader has also issued a religious decree [fatwa] prohibiting them.”

The Mujahideen Khalq, for its part, responded by rebroadcasting Motahhari’s original interview with ISCA in social and international media.

Was there ever a fatwa prohibiting the development of nuclear weapons?

In recent years, Iran has claimed that Khamenei issued a fatwa outlawing nuclear weapons, and he periodically reiterates this point in the section of his website dealing with religious-law issues. Toward the end, there is a reference to “the sacred prohibition [haram] of weapons of mass destruction.”

One area of the site presents a message from Khamenei in four languages (Farsi, Arabic, English and Spanish) to the 2011 session of the Conference on Disarmament, in which he states:

“We believe that alongside nuclear weapons, all kinds of weapons of mass destruction, such as chemical or biological weapons, pose a serious danger to the human race…. Iran has had the experience of this…. We see the use/deployment [كاربرد] of such weapons as haram and believe that everyone is obligated to invest all efforts in safeguarding the future of humanity against such a catastrophe [emphasis added].”

The message (defined as a fatwa) was conveyed to the United Nations and officially recorded. 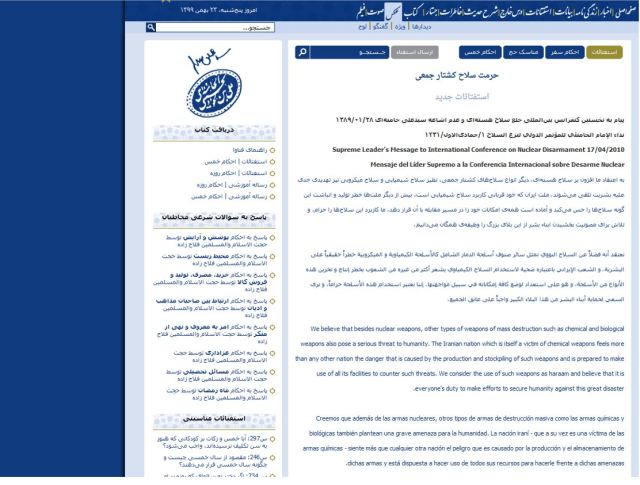 On the issue of prohibiting the use of nuclear weapons, Khamenei also referred to the conference of Iran’s Assembly of Experts on Feb. 22, 2021. He wrote:

In any case, Motahhari’s words, amid the crisis in the Vienna nuclear talks, reflect the disagreements within Iran’s military-religious leadership on the development and use of nuclear weapons as well as the negotiating strategy in Vienna. It appears that, at present, Iran prefers to take the stance touting Khamenei’s fatwa, which prohibits the use of nuclear weapons, but does not necessarily ban their continued clandestine development and production for purposes of deterrence.

IDF Lt.-Col. (ret.) Michael (Mickey) Segall, an expert on strategic issues with a focus on Iran, terrorism, and the Middle East, is a senior analyst at the Jerusalem Center for Public Affairs and at Alcyon Risk Advisors.

1. All quotations were translated from an amalgam of sources: the Jerusalem Center’s Iran Desk, BBC Monitoring, and Radio Fard.