Every spot on which your foot treads I give to you, as I promised Moshe. Joshua 1:3 (The Israel BibleTM)

Israeli soldiers walk by the water tower on the ruins of the evacuated settlement of Homesh on August 17, 2009. Homesh was one of four West Bank settlements that Israel evacuated during the disengagement. (Photo by Miriam Alster/Flash90)

During the Passover holiday, Israeli families traditionally go on tiulim—treks in parks, nature reserves and to see various landmarks.

For thousands, Tuesday’s trek was quite unique. On short notice, a steady stream of visitors marched along an 11-kilometer route past Palestinian Arab villages to the Samarian hilltop of Homesh, a Jewish settlement which has repeatedly been dismantled, and where a lone makeshift yeshiva—a tent—remains precariously standing, under threat of government destruction.

“The thousands that are coming to Homesh want to tell the government to keep [its] hands off Homesh. We’ve had enough of the forced evacuations and the roadblocks. All of Israel is reinforcing the pioneers that are there. We are here to send a message that the public supports Homesh and the public expects Homesh to be rebuilt,” Yossi Dagan, head of the Samaria Regional Council, told JNS.

Organizers had attempted to put together the event for weeks, but the Israel Defense Forces—claiming a reduced ability to keep marchers safe due to other security concerns around the country, and concerned that the march could spark further tensions—initially refused to offer its protection. The army told organizers that they would be putting lives in danger by marching unguarded for long stretches through Palestinian Arab areas on their way to Homesh. The IDF and organizers reached an agreement only on Monday. The military sealed off the roads to several Palestinian villages in the area. The event was initially supposed to draw thousands, and organizers claimed that upwards of 20,000 people attended.

Clashes between Israeli security forces and Palestinian Arabs erupted in Burka, near Shechem, with Arabs hurling stones and setting garbage on fire. Israeli forces responded with tear gas and rubber bullets. The Palestinian Red Crescent said 79 Arabs in Burqa were treated, including 25 for tear gas inhalation. 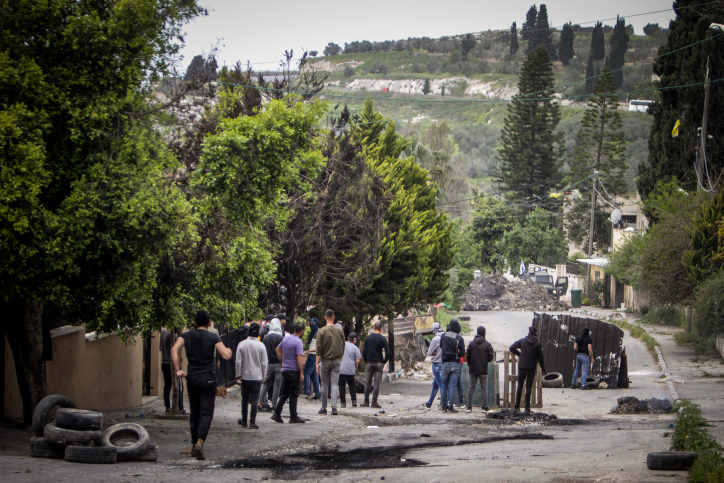 Palestinians clash with Israeli security forces in Burqa during a protest against a march of Israelis to Homesh, April 19, 2022. Photo by Nasser Ishtayeh/Flash90.

Meanwhile, several hard-right Knesset members participated in the march, including Otzma Yehudit Party leader Itamar Ben-Gvir and Religious Zionist Party chair Bezalel Smotrich. Idit Silman of Yamina, the former coalition whip who left the government recently over concerns regarding its Jewish identity, leaving the coalition without a parliamentary majority, was also in attendance.

“Here, there’s a continuation of the Zionist enterprise. Look at the many people coming here, by foot and by car. And thank God that even the army understood and permitted this to happen. We demand to return here and to reestablish a settlement,” Smotrich told JNS.

The march took on a festive atmosphere at the hilltop yeshiva, with singing and flag-waving. A Passover sermon from inside the yeshiva was pumped through loudspeakers. The overwhelming majority of those attending appeared to be from Israel’s religious nationalist movement.

The families of terror victims Yehuda Dimentman and Shuli Har-Melekh also attended. Har-Melekh was a Homesh resident killed by Palestinians in 2003 in a drive-by shooting near Ramallah. Dimentman was a Homesh yeshiva student killed when a Palestinian terrorist opened fire at a convoy ferrying students back from the yeshiva. That attack fueled renewed calls to resurrect the Samarian settlements dismantled by the government in 2005 in conjunction with the Gaza disengagement. Israelis are barred from returning to the grounds of Homesh and the other Samarian settlements, but the yeshiva there has continued to operate for the past 15 years, even as adjoining rebuilt structures continue to be torn down by Israeli forces. 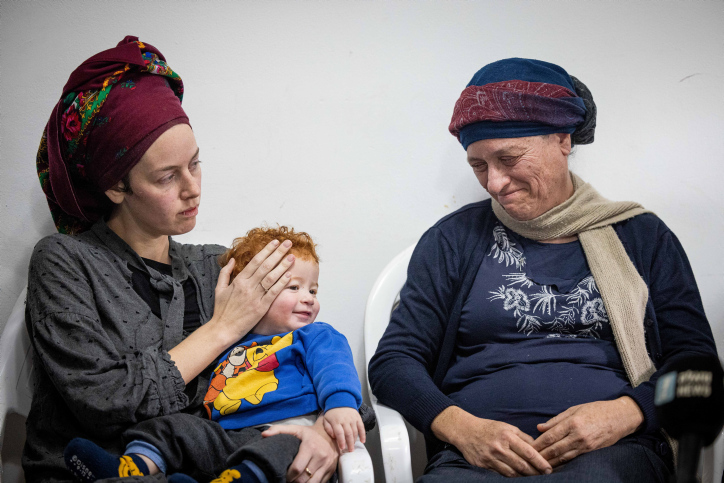 The family of terror victim Yehuda Dimentman give a press conference during the Shiva in Mevaseret Zion on Dec. 19, 2021. Photo by Yonatan Sindel /Flash90.

Ettya Dimentman, Yehuda’s widow, said on Tuesday, “The land of Israel belongs to the people of Israel. We are neither settlers nor extremists. We are just coming home. All the soldiers who fell [over] all the years in the wars, what did they fall for? They fell because they reclaimed the land of Israel. Today everyone is coming here on foot, freely, but tomorrow morning there will be a checkpoint here again, and if there is a checkpoint here again then this government is saying that this country does not belong to us.”

Silman, who seemed to receive an extra warm welcome from fellow MKs and attendees, told JNS, “It’s exciting to be here. I arrived at the invitation of Ettya, who wrote me that whoever lives by the teachings of the Torah must not give up their truth. I want to tell all teachers and rabbis and parents that there is something greater, and our faith lies with God.”