I will bless those who bless you Genesis 12:3 (The Israel BibleTM)

Christians United for Israel founder and chairman Pastor John Hagee delivering the benediction at the opening of the U.S. embassy in Jerusalem on May 14, 2018. (Credit: Screenshot)

One of America’s most powerful Christian supporters of Israel sees clear similarities between Iran’s race towards nuclear weapons and a daring Israeli strike on an Iraqi nuclear reactor back in 1981.

In a wide-ranging interview, Pastor John Hagee, founder and chairman of Christians United for Israel (CUFI) and his own John Hagee Ministries, told JNS that “there’s an exact parallel. If anything, the parallel today is even more dangerous.”

Hagee recalled Israel’s bombing of the Osirak reactor, ordered by then-Prime Minister Menachem Begin, as the moment that convinced him to launch what has become the largest Christian pro-Israel organization in the United States.

“I thought Menachem Begin had done a heroic and courageous thing, a just thing for his people. A just thing for the people of the world,” said Hagee. “He was taking nuclear weapons out of the hands of a lunatic.

Hagee noted that while he and many others supported the strike that would make Israel safer, “the ‘blame America-Israel first’ media said Israel should be condemned for its gunboat diplomacy.”

For Hagee, that was a turning point.

“And I told my wife [Diana], I said that rather than the Jewish people being castigated, they should be complimented. They should be encouraged in what they’re doing. I said, ‘We’re going to have a night to honor Israel.’ And something was born in that conversation that exploded into what became Christians United for Israel with 11.5 million members.”

Hagee was lauded at two separate events in Jerusalem this week, with the Support of Israel Award at the annual Begin Symposium, commemorating 30 years since the passing of Israel’s famed prime minister, and another at Jerusalem’s Great Synagogue. At both, he was presented the honors by Malcolm Hoenlein, executive vice chairman of the Conference of Presidents for Major American Jewish Organizations, one of American Jewry’s longest-serving communal leaders.

In his keynote address at the Menachem Begin Heritage Center on Sunday, Hagee invoked the “maniacal dream” of Iranian leaders to wipe Israel off the map, and implored that “Israel must never allow Iran to get a nuclear bomb.” 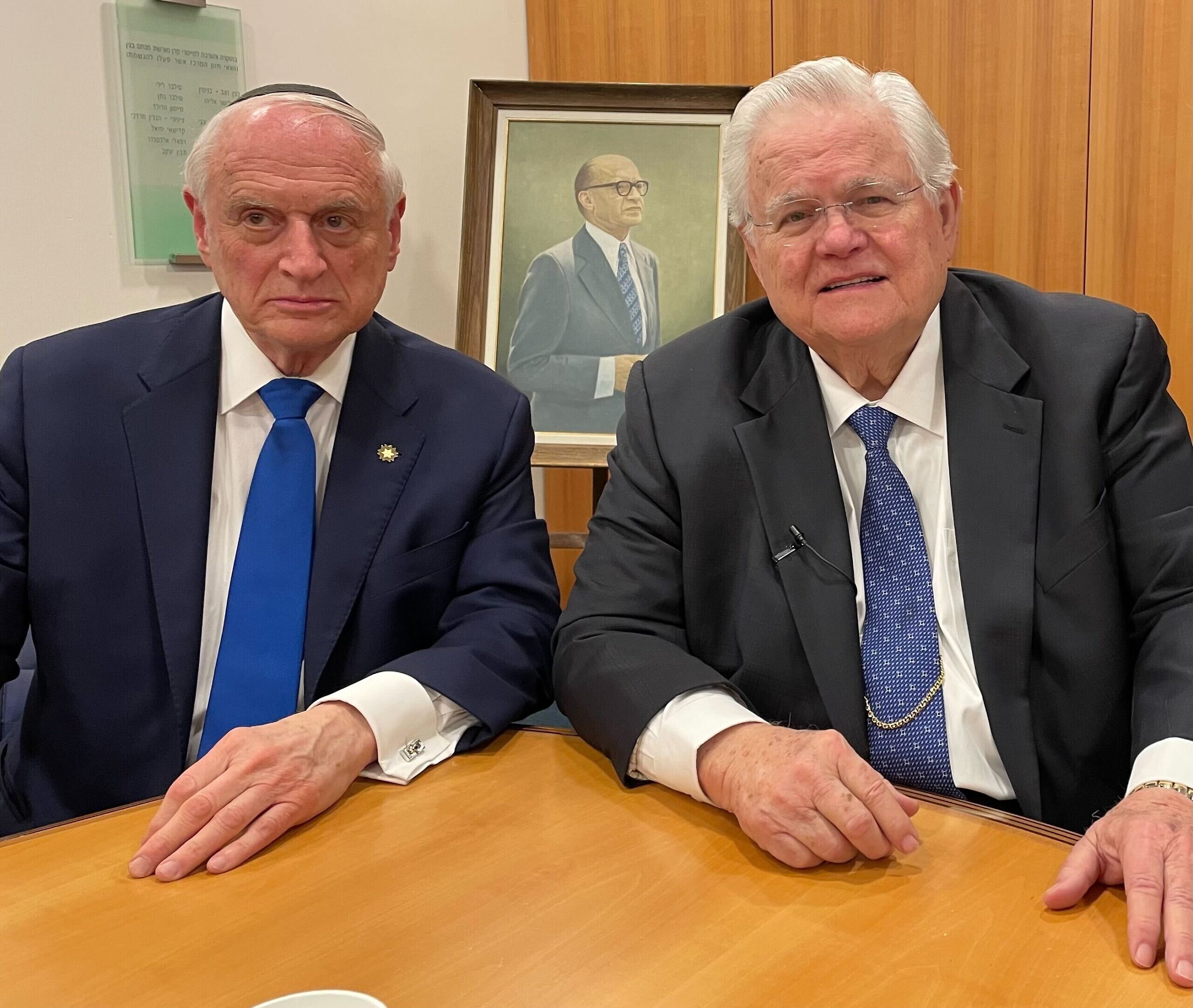 ‘A presence that excluded strength and confidence’

Prior to receiving the award, and sitting in front of painting of the former prime minister, Hagee told JNS that “Diana and I were privileged to meet with Menachem Begin three times. The first time I met him … he looked like a college professor. He was very kind, very cordial, and he had a presence about him that exuded strength and confidence.”

Thinking back on Begin’s role in Israeli history, Hagee said, “I’ve admired him from the day I met him, and I admire him today because he was a freedom fighter who was persistent about the fact that anti-Semitism was not going to conquer the Jewish people.”

Hagee noted how he brought together 400 leading pastors in America following the Osirak bombing to launch a grassroots organization that started with annual trips to Washington to appeal to members of Congress to support the Jewish state.

Some forty years later, Christians United for Israel has grown into one of the most vocal and reliable sources of support for Israel.

“We’ve now 11.5 million people who are committed to fighting anti-Semitism in its every form and standing for Israel and its right to be free,” said Hagee. “Anti-Semitism is a biblical issue; we don’t stand with Israel because it’s a political issue.”

He warned that “antisemitism is on the rise because for years colleges and universities have hired professors that considered teaching anti-Semitism and Jew-hatred to be in vogue.”

He also said that anti-Semitic attacks are increasing in American “because we are becoming a lawless nation.”

‘Support for Israel is growing’

While CUFI is growing, the situation for Jews in the United States appears to be deteriorating. Many Congress members now espouse openly anti-Israel positions. Despite claims that Israel is losing bipartisan support, Hagee said that “support for Israel is growing.”

For Hagee, Christian students are among those leading the charge against anti-Semitism.

“We have a presence on 400 American college and university campuses, where we have young people who are trained to lead other young people in how to combat antisemitism,” he said. “And I will tell you, these young people are on the frontline, especially out on the West Coast. They get slapped, spit at, attacked by antisemitic people. They get up off the ground and lead the attack.”

“We as Christians and as righteous people need to in a very visible and forcible way, stand against anti-Semitism and get it stopped. We as Christians—whether you are in CUFI or not—have an obligation to stand with Israel, period,” added Hagee. “It behooves the righteous to get on the side of God Almighty in defending the Jewish people.”

“The idea that Johnny-come-lately’s would come along and say they own the land is absurd,” Hagee told JNS. “There is a biblical record, a biblical mandate repeated over and over and over. The rocks and stones of Jerusalem are crying out that this land belongs to the Jewish people exclusively, now and forever.”

As for other news, in the wake of intense fighting against Russia’s invasion, CUFI has helped raise significant funds to help Ukrainian refugees.

“In less than a week, we raised over $2 million,” Hagee said, “and we came here Thursday morning at 1 o’clock at Ben-Gurion Airport and watched the first planeload of Ukrainian Jews come.”

He noted how he and Diana watched young mothers deboarding the airplane with babies in their arms, many who had left their fathers and husbands behind. “There were no suitcases. There was a backpack that had all of their earthly possessions,” he said.

“It was in one sense agonizing to see the terror that they were going through, but on the other hand, it was jubilation to know that there was a free state called Israel where Jews could come. That has never really existed until the State of Israel became a reality,” he added.

‘Americans ready to stand up for Israel’

Hoenlein, who got to honor Hagee at both award events, told JNS that Jews don’t fully appreciate the support for Israel they receive from America’s large evangelical community.

“I do not think that they appreciate particularly the work of CUFI,” he said. “This is a mission to improve the world, and he sees their responsibility to the Jewish people in very clear and objective terms. … And I would hope that many more in America … will come to appreciate there are tens of millions of Americans ready to stand up for Israel and for the Jewish people.”

As president of Jerusalem’s Great Synagogue, Hoenlein honored the Hagees as part of a new program to honor non-Jews who have made a unique contribution to the Jewish people and the State of Israel.

“There are very few people who have done as much as the Hagees have for countless institutions here in Israel—ranging from hospitals, to yeshivot, to orphanages, to food programs across the whole country. And they have been doing it for decades,” he said. “This is an opportunity for us to thank them—in the heart of Zion and in the heart of Jerusalem—and to tell them that the Jewish people remembers its friends.”