Israeli researchers: Iran nuclear breakout could occur ‘within a space of weeks’

Israel faces threats like no other country—among them an Iranian regime developing nuclear weapons and supplying proxies such as Hezbollah with hundreds of thousands of rockets. The terrorists behind these threats view Israel’s destruction as the only solution to their problems.

The current, ongoing negotiations in Vienna between the United States, and European countries and Iran over the latter’s return to the 2015 nuclear deal officially known as the Joint Comprehensive Plan of Action (JCPOA), hit a new snag this week as three American negotiators quit, allegedly over U.S. Special Envoy for Iran Robert Malley’s soft approach to Iran’s belligerence.

While people like Malley appear to be untroubled by the idea of a nuclear Iran, Israel remains worried. Efraim Inbar, president of the Jerusalem Institute for Strategy and Security, told JNS that an Iranian nuclear breakout could occur in a span of time as short as “about a month,” according to reports based on governmental sources in the United States and Israel.

A new report by the Institute for National Security Studies (INSS) concludes in a similar assessment that Iran “already has the capabilities required for a breakout to a nuclear weapon within a space of weeks.”

The Iran threat played a large role in encouraging Gulf countries like Bahrain and the United Arab Emirates to sign the Abraham Accords with Israel in 2020. These relationships continue to grow and have become even more important as Iran marches towards nuclear breakout.

An INSS delegation on Monday presented Israeli President Isaac Herzog with the report, who said, in response: “Today, there is an emerging regional understanding that the future of the Middle East is a future of cooperation. In the face of the Iranian threat and its dangerous proxies in the region, we must cooperate with our friends. … This is a regional interest of the highest order.”

The problem, according to the report, is that Israel “lacks an integrated, consistent and long-term strategic approach with respect to the challenges it faces.” 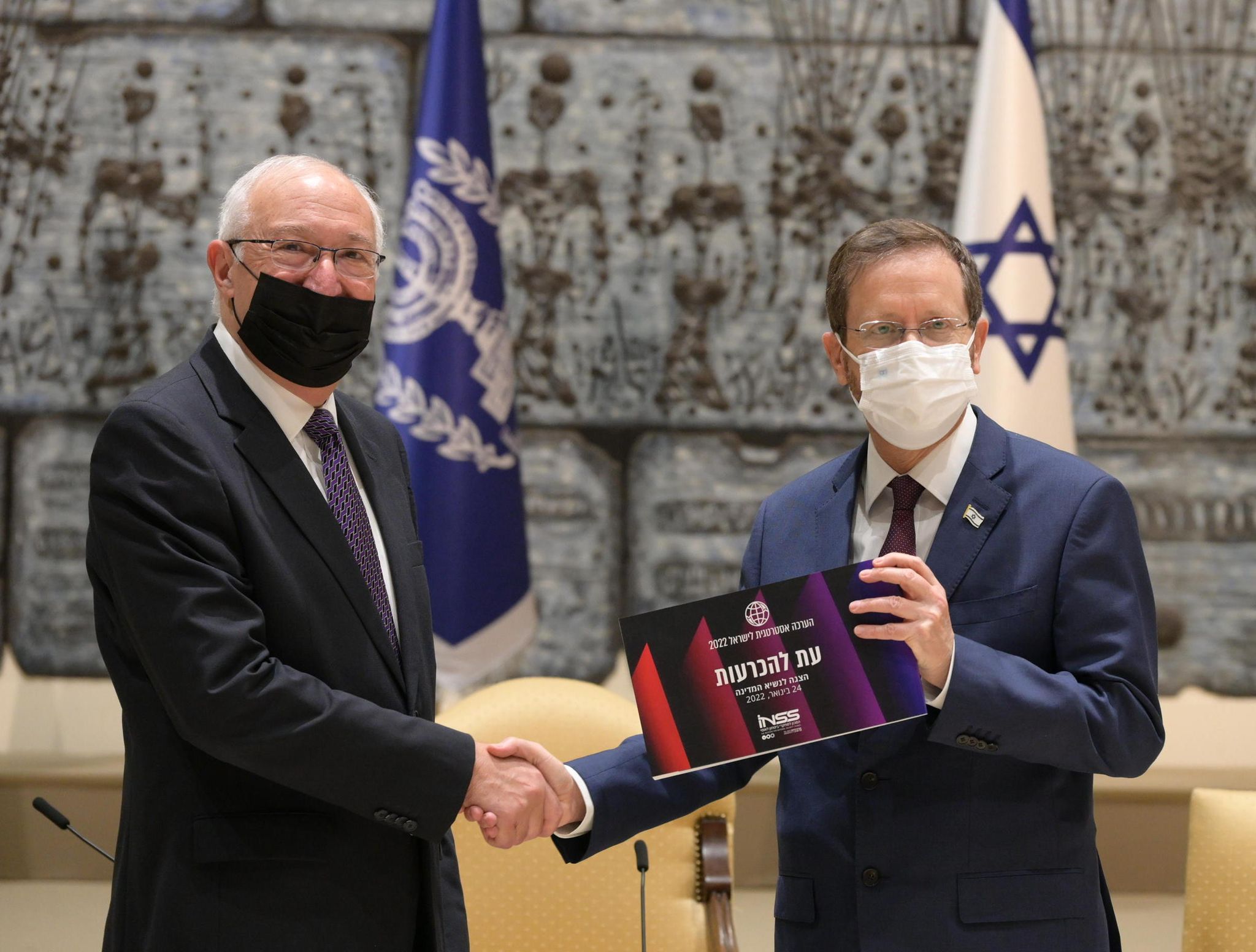 ‘Develop a strategy if Iran violates the agreement’

Many experts in Israel believe that America should push for a stronger and better deal with Iran; if that is unachievable, then it should impose heavy sanctions on Iran backed by a credible military threat.

INSS managing director Brig. Gen. (res.) Udi Dekel thinks a return to the JCPOA “is the least worst option than the others.”

“Among the negative options, there are no good options for Israel,” he told JNS.

Going back to the JCPOA, Dekel believes, will give Israel time “to beef up our capabilities” should a military intervention become necessary.

The INSS report does, however, suggest that Israel “prepare for a nuclear agreement between Iran and the powers, as well as for the absence of any agreement. There is a need to build a credible military option to stop Iran from achieving a nuclear weapon, preferably in coordination with the United States.”

According to Dekel, since the United States “will not attack Iran,” Israel must “coordinate and cooperate with the U.S., of course.”

It is better for Israel “to achieve an understanding with the U.S. and together develop a strategy if Iran violates the agreement,” he added.

According to the INSS, the three main threats facing Israel in 2022 include Iran’s nuclear activity, the conflict with the Palestinians and violence among Israeli Arabs. In the past, INSS researchers identified a difference in the scale of these concerns. Now, they contend that these threats “are equal in their severity, and that the main challenge is to define an integrated way of dealing with all three.”

The report noted that Iran is the central challenge, as it “continues to strive for a nuclear threshold and remains determined to build up its military options to threaten Israel in several areas along its borders.”

The report then claims the Palestinian issue “is a very serious challenge to the vision of Israel as a Jewish, democratic, secure and moral state—particularly due to the drift towards a one-state reality.”

‘A change in the national order of priorities’

Taking a more left-wing approach, the INSS said the Palestinian conflict “is not a secondary arena that can be contained by empty delusions about ‘limiting the conflict’.”

The INSS report points to last May’s “Operation Guardian of the Walls,” when Israel was forced to respond to the thousands of Hamas rocket attacks coming from Gaza as proof that “the absence of a solution to the Israeli-Palestinian conflict poses a serious threat to Israel’s identity as a Jewish and democratic state, and to its status on the international stage.”

At the time, a large number of Israeli Arabs sided with the Palestinians and rioted in mixed Jewish-Arab communities, including Lod, Ramle, Jaffa and Akko. They attacked Jews on the street, destroyed property, and looted and burned synagogues.

INSS concluded that this “convergence of challenges demands a change in the national order of priorities, focusing on restoring government control within the country and healing the rifts between different groups in society.”

But the INSS approach ignores the root cause of violence in Arab communities—namely, culture.

According to Inbar, “Arab violence in Israel seems to have cultural roots that have not been treated by the education system.”

Inbar does, however, agree that Israel’s “lack of effective policing in the Arab sector is also a factor.”

Commenting on the report, said Dekel, “our message this year is that we cannot [ignore] the other important challenges that we have. We cannot assume we can focus on Iran and relegate these issues as secondary in importance.”

While it is plausible that the Israeli public would like to see a heavier focus on domestic issues, not everyone agrees that the Iran issue must be put on par with Arab violence or the Palestinian issue.

The Palestinian issue is not resolvable for the time being, and Arab violence can be brought under control with intense policing, harsher punishments for crimes and a massive crackdown on illegal weapons.

According to Inbar, “the most acute problem is Iran.”

He elaborated on that, saying “neither the Palestinians nor the Arabs in Israel present a national security problem of Iranian magnitude and urgency.”