They prepared a net for my feet to ensnare me; they dug a pit for me, but they fell into it. Selah. Psalms 57:7 (The Israel BibleTM)

An image taken from what the Israeli military says was a Hezbollah drone downed after crossing the border from Lebanon. In the image, the drone's operators can be seen engaging in what the IDF says is a training exercise. Source: IDF Spokesperson's Unit.

A drone downed by the Israeli military last week contained images apparently showing a Hezbollah-affiliated force training with UAVs, according to the Israel Defense Forces.

Among the images were pictures of the drone’s operators, tweeted Lt. Col. Avichay Adraee, the head of the IDF Spokesperson Unit’s Arab media division, on Friday.

Israeli forces downed the drone on Tuesday, after it crossed from Lebanon into Israeli airspace. The drone was monitored throughout the incident, according to the IDF.

The IDF’s Galilee Division has significantly upgraded its ability to detect and monitor drone activity along the northern border, resulting in a “noticeable increase” in the number of downed drones, said Adraee on Friday. 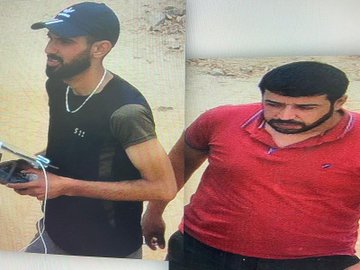 The operators of a drone downed by the IDF on Jan. 4, 2021. Source: IDF Spokesperson’s Unit.