They prepared a net for my feet to ensnare me; they dug a pit for me, but they fell into it. Selah. Psalms 57:7 (The Israel BibleTM)

A Syrian military bunker full of ammunition was uncovered in the Golan Heights on Tuesday by the Israeli Defense Ministry’s Mine Action Authority (MAA).

The bunker was abandoned after Israel captured the region from Syria during the 1967 Six-Day War.

The site contained hundreds of items, including mortar shells of various diameters, fuses, pyrotechnic munitions, explosives, shotgun shells and more. Some of the ammunition was strewn about, while some was in its original packaging.

The items were moved to a secure storage facility where they will be held until they can be safely destroyed.

The bunker was built in Syria’s al-Mourtafa outpost at the Gadot Observation Point. The outpost was one of the Syrian army’s most fortified on the Golan Heights before the Six-Day War. Syrian soldiers stationed there regularly shelled Israeli communities in the Hula Valley below.

Thousands of mines from that era remain scattered in the fields surrounding the outpost. 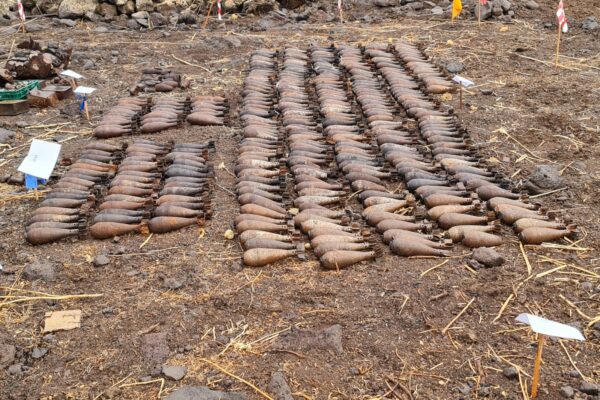 Today, the site acts as a memorial site for the IDF’s Alexandroni Brigade (3rd Brigade) that first broke through the Syrian lines.

The MAA has been working to clear the area around the bunker to open more parts of the Golan to hikers and tourists.

Still—while 8,150 acres of known minefields remain in Israel—some 22,200 acres of mined land is reportedly yet to be identified.

Such land is mostly in open fields on the Golan Heights, the Arava desert in southern Israel, and along Israel’s borders.