Fatah official: Terrorist prisoners are “our elite and most favored ‎people”‎

When 6 Palestinian terrorists escaped from an Israeli prison earlier this month, senior Fatah official Abbas Zaki was quick to reiterate PA ideology when it comes to Palestinian prisoners. In two separate interviews, Zaki stated that it is PA policy to “honor” anyone who fights Israel – the enemy – including those using the “armed struggle,” and that imprisoned terrorists are “our elite and most favored people” and deserve salaries. 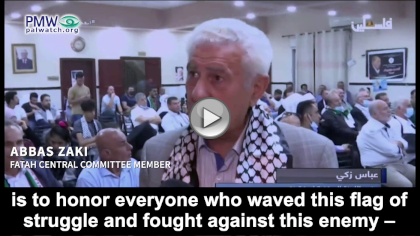 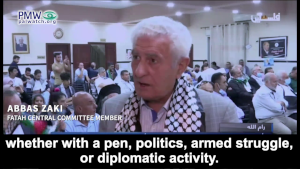 Fatah Central Committee member Abbas Zaki: “Our custom in the Palestinian arena is to honor everyone who waved this flag of struggle and fought against this enemy – whether with a pen, politics, armed struggle, or diplomatic activity.” 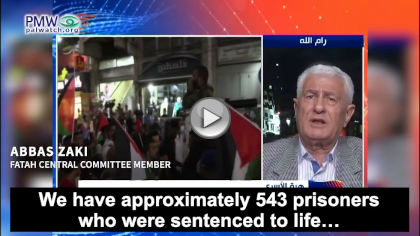 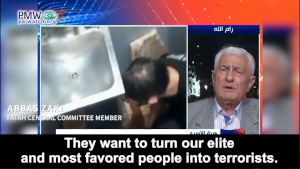 Fatah Central Committee member Abbas Zaki: “We have approximately 543 prisoners who were sentenced to life… Israel is also preventing the payment of salaries to them. They want to turn our elite and most favored people into terrorists.”

Palestinian Media Watch has reported on numerous statements by Zaki in which he has expressed his support for terror and terrorists.

2021 Gilboa Prison escape – 6 Palestinian terrorist prisoners escaped from Israel’s Gilboa Prison on Sept. 6, 2021, by widening the hole of the shower drainpipe in the floor of their cell. One terrorist is from Fatah – Zakariya Zubeidi, and the other five are from Islamic Jihad – Ayham Kamamji, Muhammad Ardah, Mahmoud Ardah, Yaqub Qaderi, and Munadil Nafiyat. Four of the terrorists were recaptured after five days: Zubeidi, Ardah, Ardah, and Qaderi. Kamamji and Nafiyat were arrested in Jenin on Sept. 18, 2021 along with two accomplices.Zubeidi was head of the Al-Aqsa Martyrs’ Brigades (Fatah’s military wing) in the Jenin area during the PA terror campaign (the second Intifada, 2000-2005), when he oversaw numerous lethal attacks, and he also carried out shooting attacks in 2018-2019.Kamamji participated in the murder of 18-year-old Eliyahu Asheri on June 25, 2006, and planned to blow up a bus using an exploding car.Muhammad Ardah participated in initiating and executing a suicide bombing on bus no. 823 on Nov. 29, 2001, in which 3 people were murdered and many others were wounded.Mahmoud Ardah was involved in numerous attacks; the website of Islamic Jihad’s military wing defined him as the “commander” of the prison escape.Qaderi committed a shooting attack on Sept. 18, 2002 with an accomplice in which Israeli Yosef Ajami was murdered and a foreign worker was wounded. Nafiyat was being held in administrative detention.

Ahmed Jibril – senior PLO leader and head of the Popular Front for the Liberation of Palestine – General Command (PFLP – GC).

Israel’s Anti “Pay-for-Slay” Law – Israeli law stating that the PA payments to terrorists and the families of dead terrorists is a financial incentive to terror. The law instructs the state to deduct and freeze the amount of money the PA pays in salaries to imprisoned terrorists and families of “Martyrs” from the tax money Israel collects for the PA. Should the PA stop these payments for a full year, the Israeli government would have the option of giving all or part of the frozen money to the PA.The law was enacted by the Israeli Parliament on July 2, 2018. During the parliamentary vote, the law’s sponsor Avi Dichter said: “The Foreign Affairs and Defense Committee received much help in its deliberations… from Palestinian Media Watch who provided us with authentic data that enabled productive and professional deliberations, nuances that are very difficult to achieve without precise data.” [Israeli Parliament website, July 2, 2018] In accordance with the law, as of September 2021 Israel’s Security Cabinet had ordered the freeze of 1.857 billion shekels ($580.15 million) – the sum equivalent to the PA payments to terrorists in 2018, 2019, and 2020.