Senior Fatah official Munir Al-Jaghoub, head of the Fatah Mobilization and Organization Commission’s Information Office, celebrated the escape of six terrorists from Gilboa Prison this morning with a post he published on his Facebook page and Twitter account: 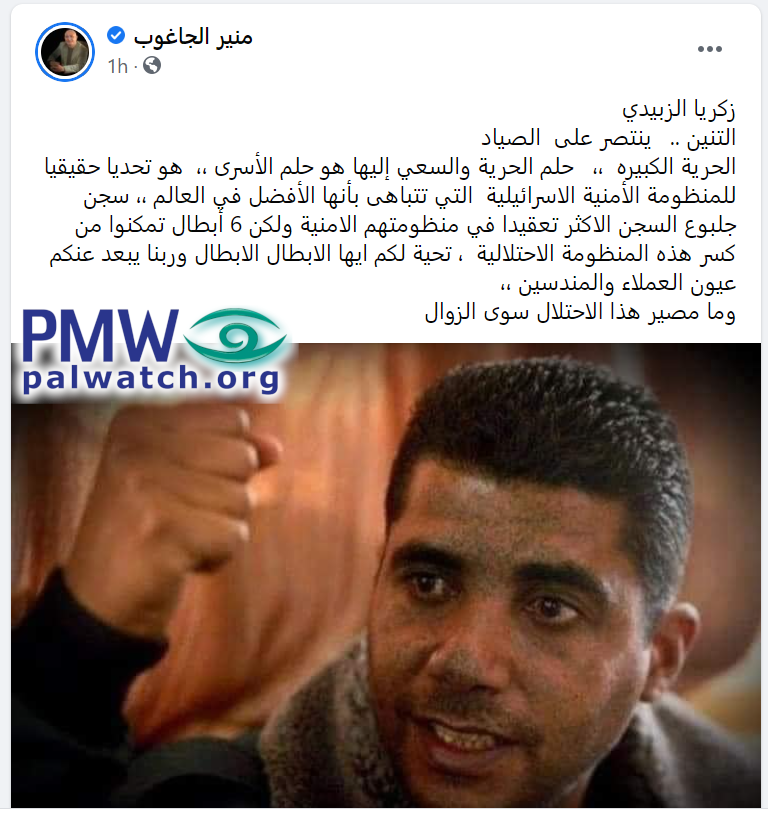 Great freedom, the dream of freedom, and striving for it are the prisoners’ dream. This is a true challenge to the Israeli security system that boasts of being the best in the world. Gilboa Prison is the most complicated prison in their security system, but 6 heroes succeeded in breaking this system of the occupation. Blessings to you, O heroes, and may God keep the eyes of the [Israeli] agents and plants away from you.

And this occupation has one end – to pass.”

Another terrorist Fatah “hero” who was a partner in the escape from Gilboa Prison, and who was also termed a “hero” by Al-Jaghoub, is Ayham Kamamji who murdered young Eliyahu Ashri in 2006, and planned to blow up a bus filled with passengers using an exploding car carrying a massive explosive approximately 100 kilograms in weight.

Yet another terrorist Fatah “hero” who escaped from Gilboa Prison is Muhammad Ardah, an Islamic Jihad member who was put on trial and convicted for his part in initiating and executing a suicide bombing on Nov. 29, 2001, in which 3 people were murdered and many others were wounded.

Another Fatah “hero” is Mahmoud Ardah, who was arrested in 1996 and sentenced to life and another 15 years, also escaped. The website of Islamic Jihad’s military wing defines him as the commander of the escape operation.

Another Fatah “hero” terrorist who was a partner in this escape is Yaqub Qaderi, who committed a shooting attack in 2002 in which Yosef Ajami was murdered and a foreign worker was wounded.

It should be noted that just a few weeks ago Palestinian Media Watch warned that the Israeli Prison Service apparently is unaware of what is happening with the terrorist prisoners, who are studying for academic degrees within the prison walls in contradiction of the Israeli government’s decision.

Tragically, we know now that they were doing more than just studying.