In those days, ten men from nations of every tongue will take hold—they will take hold of every Yehudi by a corner of his cloak and say, “Let us go with you, for we have heard that Hashem is with you.” Zechariah 8:23 (The Israel BibleTM)

Blowing shofar in the Gulf to mark the arrival of the Jewish New Year 5782. Credit: Association of Gulf Jewish Communities

With Jews around the world set to begin the High Holiday season, the small Jewish communities in six Gulf states, including Bahrain, Kuwait, Oman, Qatar, Saudi Arabia and the United Arab Emirates, are planning to take part publicly in some of the traditional holiday rituals for the first time in decades.

This newfound openness is a direct result of the Abraham Accords signed a year ago between Israel, the United States, the UAE and Bahrain, followed by Sudan and Morocco.

Ebrahim D. Nonoo, leader of Bahrain’s Jewish community and president of the newly founded Association of Gulf Jewish communities (AGJC), whose goal is to develop Jewish life in the region, told JNS that “the best thing about Rosh Hashanah this year is that we are able now to advertise it. We are saying ‘Happy New Year’ to our Bahraini friends and government officials. It’s beautifully really out in the open now.”

He added “for us, in Bahrain, it’s about reciting the prayers, which we will be doing at home. But at the same time, we are sending packages of honey, pomegranates and other traditional Rosh Hashanah items to [Muslim] Bahraini families so they can join us in experiencing Rosh Hashanah.” 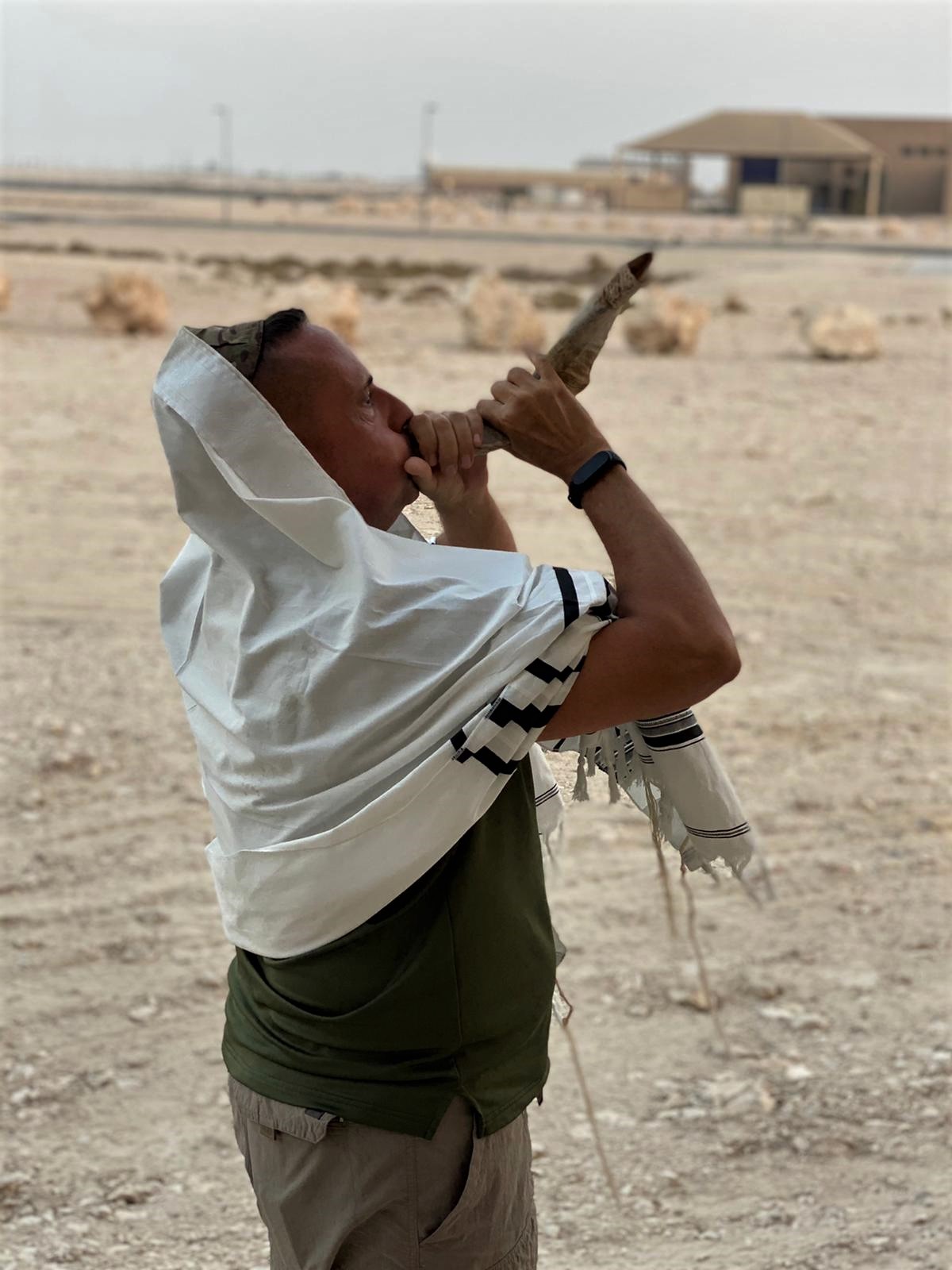 Blowing shofar in the Gulf to mark the arrival of the Jewish New Year. Credit: Association of Gulf Jewish Communities.

Nonoo grew up in Bahrain after his grandfather moved to the country from Iraq seeking business opportunities and succeeding in establishing a life there for his family. As such, Nanoo is seeking to expand avenues of Jewish growth for others.

He is hopeful that the community will soon have a full-time rabbi and make greater use of the local synagogue in the city of Manama, Bahrain’s capital. He currently tries to conduct services there on a weekly basis.

He said that since the signing of the Abraham Accords “government officials have become more open, and we are getting a lot more visitors, which is a fantastic sign. At the same time, more local Jews”—he estimates 50 community members—“are coming to the synagogue and want to see what’s going on.”

Nonoo said while fewer Jews reside in the other Gulf countries, the AGJC was formed to support them with their needs to participate in the rituals on Rosh Hashanah and maintain a Jewish lifestyle throughout the year.

Michael (last name withheld upon request) is also an AGJC board member who represents around 10 Jews living in Oman. He owns an engineering consultancy company and is a development strategist, having arrived in the country in 2008 from Vancouver, Canada.  He decided to stay there permanently after stints working throughout the Gulf since the 1970s.

He told JNS that he has always felt safe there—safer than in Vancouver. He said he believes that any anti-Jewish sentiment exists because of ignorance as a result of social media and other media-related propaganda.

With few practicing Jews in Oman, coupled with the onset of the coronavirus pandemic, he said that his community will be celebrating this Rosh Hashanah in their homes. Michael personally will be celebrating with his son, who flew in from abroad. He plans to fly to Dubai for Yom Kippur.

Michael, who claims to make “the best hummus in all of Oman,” said it’s his goal to reopen the country’s only Jewish cemetery for use when the need arises and has discussed the issue with the relevant officials.

The largest Rosh Hashanah event in the region is slated to take place in Dubai, the UAE city that boasts the largest Jewish community, with an estimated 500 practicing Jews.

‘This is going to be an amazing experience’

Alex Peterfreund, a co-founder of Dubai’s Jewish community, its cantor and an AGJC board member who arrived in the country from Antwerp, Belgium, in 2014, told JNS that the community will be hosting services and kosher meals for several hundred guests in a local hotel under the leadership of Rabbi Dr. Elie Abadie, the Jewish Council of the Emirates’ (JCE) senior and resident rabbi. 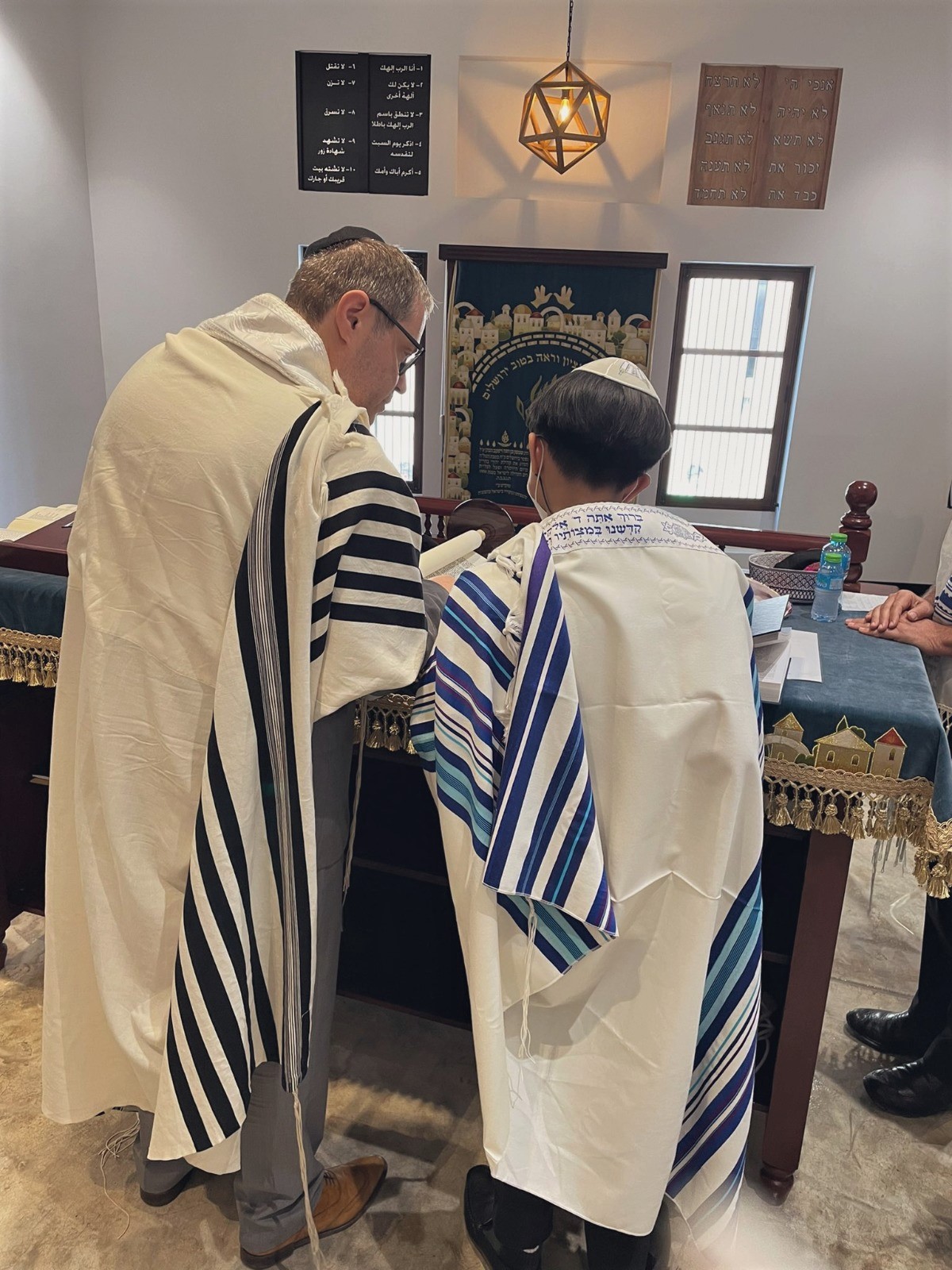 Alex Peterfreund teaches a boy to read from the Torah at the synagogue in Bahrain. Credit: Association of Gulf Jewish Communities.

Similar to comments made by Nonoo, Peterfreund said “the biggest difference between this Rosh Hashanah and in previous years is that we were a group of Jews coming together in a discreet way, and now it’s much more open and people feel more comfortable.”

He added that “in the past, some people were insecure and hesitant, and that is much less the case this year.”

Peterfreund said another big difference is that this year, local Muslims from Dubai would be joining the group to take part in the festivities.

“The main focus is the interaction between Muslims and Jews,” he emphasized. “This is going to be amazing. When you sit and explain why you eat the head of a fish, pomegranate, apples and honey—what we have been doing for thousands of years—and you feel how the locals are curious and eager to interact with us, this is going to be an amazing experience.”

He noted that “the same way that we have learned about Ramadan and their traditions, they will be a full part of our festivities.”