Starting the second week of September, Israeli organic farmer Ben Rosenberg will stop planting in the field. He will grow his veggies in raised containers inside fabric-covered hothouses until next September.

The hothouse setup was expensive, and he will only be able to grow about half the usual 40 seasonal varieties he raises in the field during a normal year. But it’s not going to be a normal year. The year 5782 on the Jewish calendar—starting at sundown on Sept. 6—is a sabbatical year for the land.

According to the Bible, every seventh year in the Land of Israel is a shmita (“release”) year, when debts are canceled and fields lie fallow and ownerless. Promoting growth through most forms of plowing, planting and pruning is forbidden, as are the usual methods of reaping and harvesting.

Any previously planted vegetable, flower or fruit that grows in the soil during the sabbatical year has a special sanctity. It must not be wasted or sold—it should be made available freely to anyone, in acknowledgement that the land is God’s, not ours.

The Bible promises a triple bounty in the sixth year of the agricultural cycle—enough for the sixth, seventh and eighth years until new crops can be planted and harvested (Leviticus 25:20-23).

In modern Israel, most large commercial farmers symbolically relinquish ownership of their land for the sabbatical year, enabling them to sell produce grown in the soil with certain modifications, such as plowing before shmita begins.

Farmers choosing to practice shmita more literally can use various methods to continue providing produce to the market. One option is to grow hydroponically or in raised containers, as Rosenberg does.

His quarter acre of shmita hothouses were built under rabbinical supervision to ensure the plants have no contact with the soil in his three-acre field.

“The ground is the best way to grow food because it’s the natural environment, but there’s no doubt that if the land rests it replenishes itself. I saw that when I started growing here 13 years ago,” he said.

Simple crop rotation could accomplish that goal, but shmita is a larger concept and is meaningful to this transplanted American.

“It’s an emotional thing for me,” said Rosenberg. “To be able to do a mitzvah [commandment] that is connected to the land is very special.” 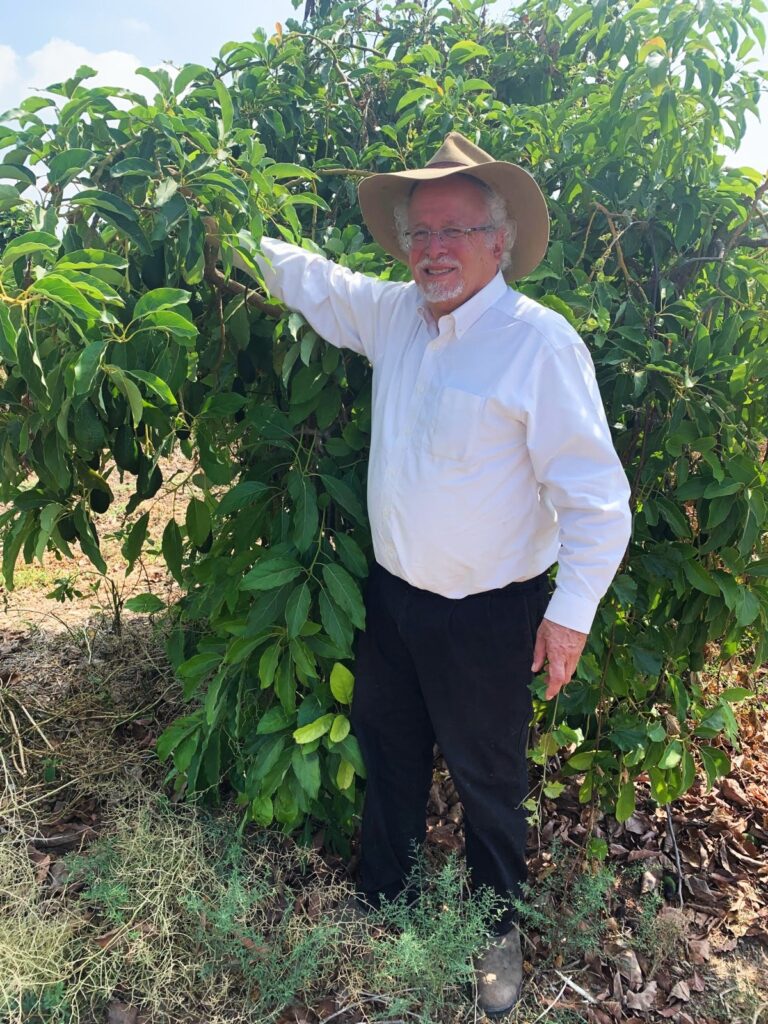 Colb’s charity farm, Hatov V’hameitiv, provides 50 tons of fruits and vegetables each week from approximately 200 acres of leased, bought and borrowed fields. The harvest is distributed to 35 social-service agencies for allocation to nutritionally challenged Israeli populations.

In sabbatical years, he and his farm team consult with a local rabbi to make sure they strictly adhere to rules about resting the soil.

“I think shmita is a great mitzvah, and we do it right. It’s rather complex, but it forces you to do things in a different way,” said Colb. “You just have to plan it very carefully and, with the proper attitude, it’s a wonderful experience.”

Much of his acreage is devoted to fruit trees that produce perennially. 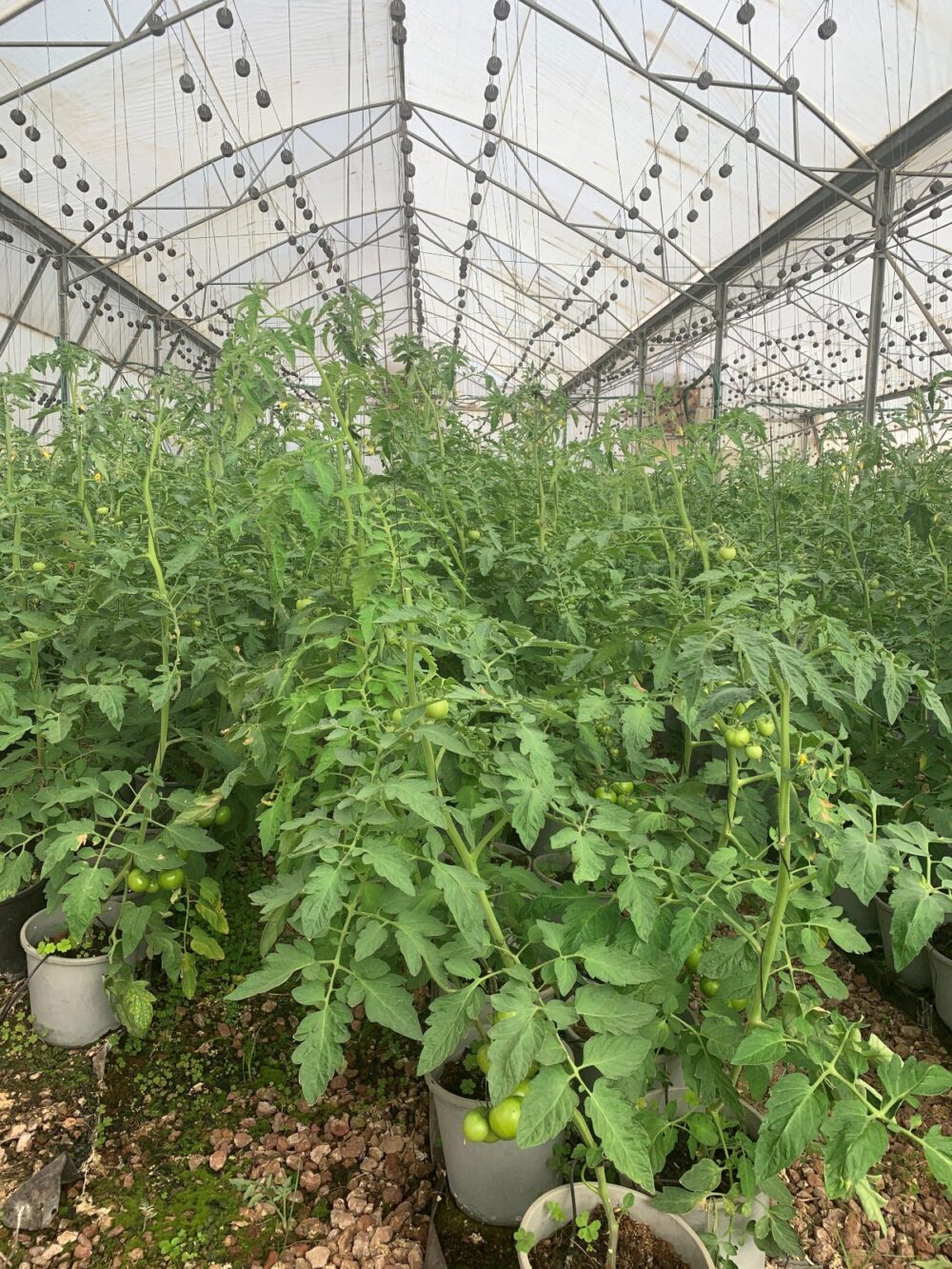 “Citrus and most other tree crops form before shmita begins and can be picked during the shmita year,” he explained.

Fruit that forms during the sabbatical year will have the special sanctified status even though it will be picked after shmita is over.

“Vegetables are different,” he said, because they must be planted anew each season.

Some field crops can be planted early to avoid planting during the seventh year. Colb raises veggies such as tomatoes and cucumbers in greenhouses, disconnected from the ground.

He makes a point not to furlough any employees during shmita, “but we will use contractors less toward the end of the year because we won’t be planting.”

In the late 1950s, the Israeli Ministry of Agriculture established a Unit for Agriculture According to the Torah at the ministry’s Agricultural Research Organization-Volcani Center.

Pioneered by Moshe Sachs, a founder of Kibbutz Shaalbim, this unit experimented with solutions for growing crops without violating shmita rules, such as raising roses in hay-bales rather than in the ground.

Joshua Klein took over the unit in 1989. Arriving with a PhD in plant science from Cornell University, Klein began introducing techniques for managing fruit orchards and vineyards during shmita.

One innovation is chemical thinning, which reduces the number of flowers to promote bigger, higher-quality fruit without performing any prohibited pruning.

Another project was developing seedling treatments to induce drought resistance so that crops can be sown early, before shmita and the rainy season begin.

“We have an experiment funded by the chief scientist of the Ministry of Agriculture on early [vineyard] pruning in the fall before Rosh Hashanah of a shmita year, rather than the usual timing in the spring, if you want to have a yield of grapes during shmita,” said Klein. 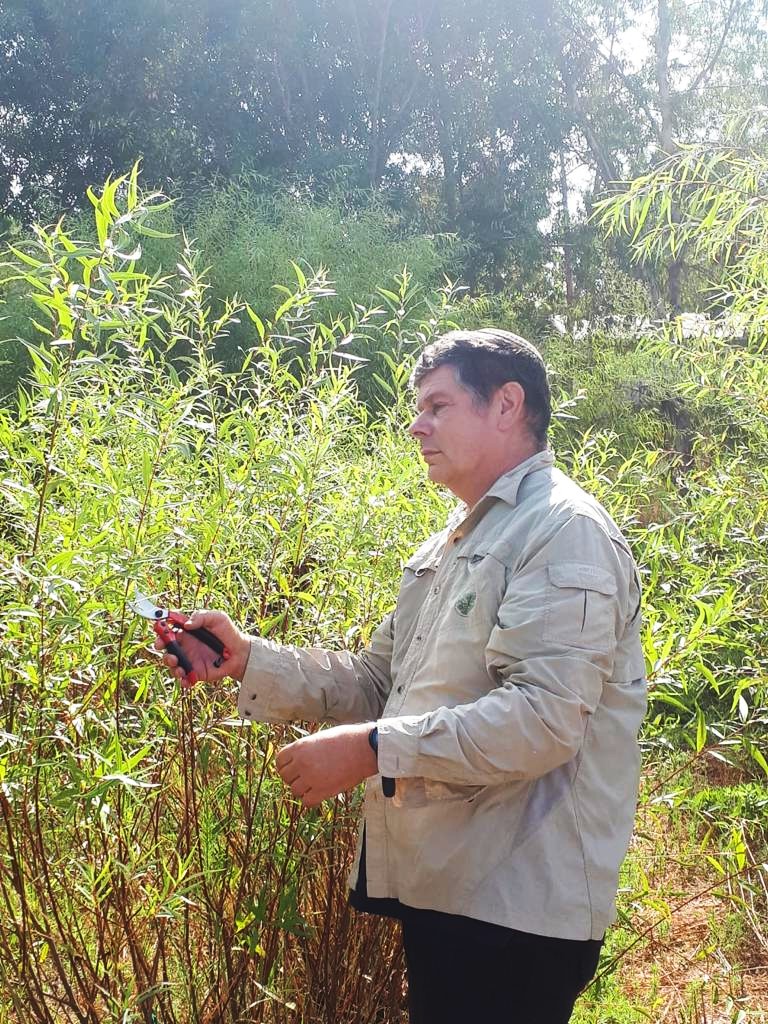 “If you don’t want to have a yield at all, you can do extreme pruning and the vines will only yield in the eighth year while renewing the vineyard.”

The unit’s plant scientists also are trying to extend storage of produce harvested in the sixth year so that it can be sold in the seventh year.

Experimental approaches range from wrapping in plastic (partially successful with citrons) to spraying with mint oil (more successful for potatoes than carrots).

“All of these projects have relevance to farmers who don’t keep shmita, as well as to farmers outside Israel,” emphasizes Klein, who lectures across the world and answers questions from agriculture students, farmers and rabbis.

He explains that shmita applies only within the borders settled by the ancient Israelites upon their return from Egyptian slavery. This excludes the southern Arava Valley and large portions of the Negev, where farming continues as usual.

According to Klein, the main ecological advantage of letting the land lie fallow for a year is that diseases cannot infect unplanted soil.

“Nematodes—worm-like animals that live in the ground and chew on roots, and thus damage and infect plants with disease—die from lack of food. The same can happen with other diseases because with no food, there is no place for the disease to remain established, so you start the eighth year with a cleaner slate,” said Klein.

“On the other hand, letting weeds grow freely during shmita consumes water stored in the ground that could otherwise be used for crops after shmita, and makes for a very large investment in time and money to return the field to a productive state,” he added. “We developed methods of managing weeds in fallow fields to save water and effort.”

There is another advantage, that he can’t prove scientifically.

“I do not understand the reason, but wine from the grape harvest of shmita has been a superior vintage in four out of the five shmita years I have been in Israel,” he says.

Ari Pollack is a partner in Tom Winery, founded after the sabbatical year that concluded at Rosh Hashanah 2008.

When their first shmita approached in 2014, Pollack and head grape-grower/winemaker Tomer Pnini pruned the vines in their seven-and-a-half-acre Kerem Meirav vineyard just before Rosh Hashanah.

“It’s risky to do it before the fall because the vineyard can ‘wake up’ early, but we were okay,” says Pollack, who works in high-tech on the side.

The partners took seriously the Bible’s admonition not to sell or waste the shmita fruit.

“When our grapes were ready, we sent messages on Facebook and email that anyone could come pick for free, and we would help them make wine from the grapes they picked,” Pollack said. “Everything was picked.” 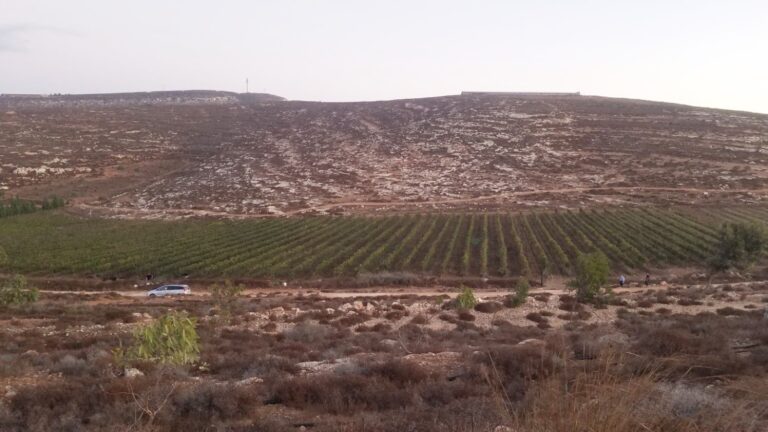 To prepare for the coming shmita, Pollack and Pnini stepped up wine production by 50 percent to 70 percent as a hedge against lost income in the seventh and eighth years.

But pre-shmita pruning may not be possible, because Rosh Hashanah comes early this year.

“We might still be harvesting the sixth year after the holiday. If so, we won’t be able to prune for a long time because the point of pruning is to get better fruit and you can’t do that after shmita begins,” explained Pollack.

To find a solution, they may consult with experts such as Yishai Netzer from the chemical engineering department of Ariel University, who is testing methods of pruning before shmita. 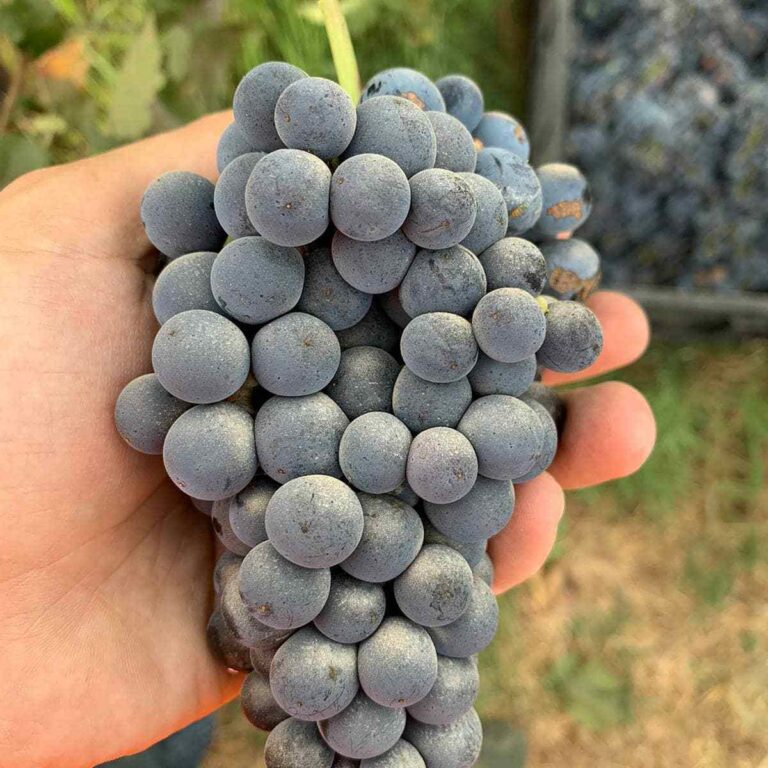 “It’s a big test of faith to take a break from working the land,” Pollack admitted. “Especially in today’s global market where you can get anything anytime.”

Yet he and Pnini find shmita meaningful.

“Everyone is talking about social justice and bridging gaps between poor and rich, and here we have something every seven years where there is no rich and no poor; everyone is equal. To remember that the land is His, not ours—it’s a pretty powerful message,” says Pollack. 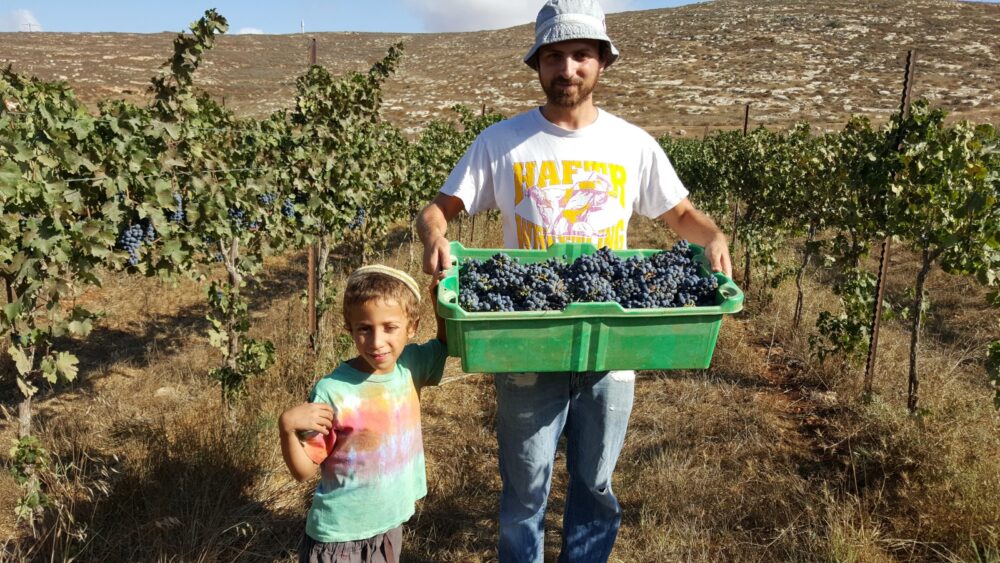 Agronomists from the nonprofit Institute for Torah and the Land of Israel  (Machon HaTorah Ve’HaAretz) teach Israeli municipalities how public gardening can follow shmita rules.

Prior to the sabbatical year they switch from annuals to perennials and perform seasonal treatments. During the year, they only preserve and maintain existing trees and plants.

The institute also educates the public about home gardening during shmita, and mechanisms for distributing, acquiring and handling seventh-year produce.

“It is very important that in our gardens we let the land rest and acknowledge that the fruits are not ours. We may maintain our gardens but allow everyone to come and harvest what was planted before shmita,” says Rabbi Moshe Bloom of the institute’s English-language department.

To ensure seeds planted early before Rosh Hashanah don’t sprout and die before the rainy season, the institute advises farmers to sow more densely and deeply and avoid watering. This way, the seeds will sprout only after the early fall/winter rains arrive.

One of the institute’s agronomists bought a special refrigerator in Europe and found a unique use for it in Israel—keeping heads of bug-free cabbage fresh for three months. This enables farmers to plant extra cabbage, pick it just before shmita begins, store it and sell it for the first three months of the sabbatical year.

“Maybe these technologies are the fulfilment of the Torah’s promise of a surplus in the sixth year,” said Bloom. “We won’t have to rely on sources outside of Israel and we will have enough to eat in the seventh and eighth years.”

The Institute for Torah and the Land of Israel offers tours of its innovations concerning shmita as well as other biblical agricultural laws.

Israel365 is currently helping compensate farmers who must abandon their fields during the Sabbatical year. To learn more, click here.