As Palestinian Media Watch exposed, the Palestinian Authority is now providing terrorists and their families with specifically designated ATM cards, as a means to implement its “Pay-for-Slay” policy. In doing so, the PA has now dragged at least two multinational companies – BPC Banking Technologies and VISA/VISA PLUS – into its pugnacious program and potentially exposed them to both criminal and civil liability.

Since Palestinian Media Watch assumes that neither of these companies are even aware of the fact that their technology is being used to fund, incentivize and reward terror and terrorists, PMW has written to both companies urging them to take action in order to avert the potential damage.

Worldwide, ATM (Automated Teller Machine) technology is provided by a number of companies. In the PA, two such technology providers are BPC Banking Technologies (a Russian owned company, registered in Switzerland, with US branches) and VISA/VISA PLUS.

Announcing the launch of the “National Switch” – the system that supports the use, inter alia, of ATM cards – a financial news website noted:

“The collaboration of BPC Banking Technologies with PMA resulted in a record breaking time of the launch – 18 months – building the whole national switch system from scratch.”

The report further quoted the then Head of the Palestinian Monetary Authority (PMA), Jihad Al-Wazir, who said:

“Palestine Monetary Authority highly appreciates to partner with BPC Banking Technologies. The path from the idea of National Switch in the country to its implementation was straight and short due to our partner’s expertise and dedication to the project.”

A promotional video posted on the Facebook page of the Tubas post office showed not only the ease of using the new ATM cards but also the fact that the cards use VISA/VISA PLUS technology and ATM. 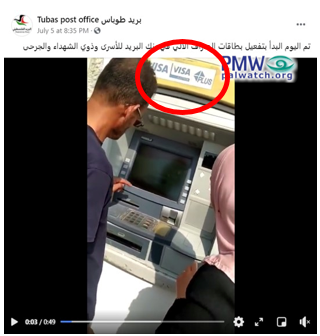 Posted text: “The activation of the ATM cards of the prisoners, the family members of the Martyrs, and the wounded at the postal bank began today [July 5, 2021]”

The video in the post shows a man withdrawing money from an ATM with the logo of the Visa Plus interbank ATM network on it.

The 2018 Taylor Force Act found that the PA’s terror reward policy “is an incentive to commit acts of terror.” Facilitating the payment of funds, which both incentivize and reward terror, would most certainly be considered to be a violation of 18 U.S. Code § 2339A – Providing material support to terrorists.

Since exposed by PMW in 2011, different steps have been taken, domestically and internationally, to combat the policy.

Most recently, Israel passed anti-terror legislation in which it prohibited the performance of any activity with property, including a banking activity, undertaken for the purpose of rewarding a person for the commission of a terrorist offence.

In an attempt to circumvent the Anti-terror legislation, the PA recently announced the distribution of ATM cards through which the terrorists and their families will be able to withdraw their terror rewards at their own leisure, from Palestinian post offices.

Last year, when the PA was preparing to establish a new bank just for disseminating money to terrorists and their families, PMW wrote to VISA (and Mastercard) warning them of the potential danger of the PA using their services to reward terror and terrorists. While the terror bank never came to fruition, it would appear that the PA nonetheless found the way to drag VISA/VISA PLUS into the quagmire.

If these companies do not act swiftly to prevent the continued use of their technologies to support terror funding and the payment of rewards for terror, they could potentially be seen as willing accomplices and face the ensuing criminal and civil liability.