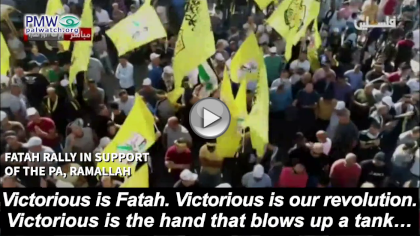 When broadcasting footage from a Fatah rally in Ramallah in support of the Palestinian Authority, official PA TV added background music to video footage. What kind of music? Explicit terror promotion!

The song PA TV added to visuals of thousands of demonstrators with yellow Fatah flags encourages violence and terror, and praises as “victorious” and “mighty” the hands that “blow up” tanks and planes: 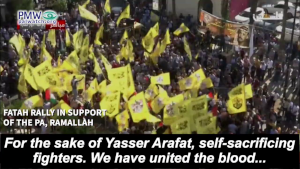 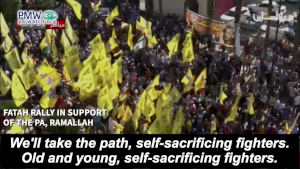 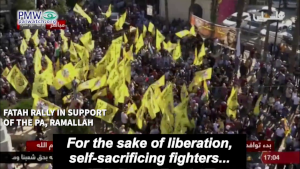 That official PA TV decided to add such a song to a pro-PA rally is not surprising. Palestinian Media Watch has documented for over two decades that the PA uses music videos, among other things, to support and encourage violence. Recent  examples include the repeated terror promotion through the TV quiz The Tune of the Homeland, which often includes songs that praise rifles and bullets, and urge Palestinians to engage in the “armed struggle” against Israel and seek death as Martyrs for “Palestine.”

A Palestinian composer summed up the function of the Palestinian national songs as a means of “incitement and mobilization,” while stressing the need to “increase incitement” to the young generation: 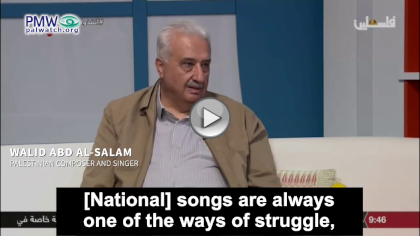 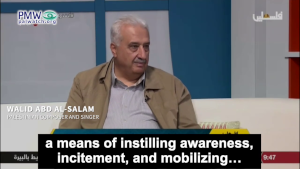 Palestinian composer and singer Walid Abd Al-Salam: “[National] songs are always one of the ways of struggle, a means of instilling awareness, incitement, and mobilizing… I’m sad about the generation that didn’t experience the intifada. There is a generation that was born after the 1990s. They didn’t experience the first Intifada, and perhaps not the second [Intifada] either. Therefore, [what happened] in 1967 and in 1948 is ancient history… This generation… for which goal will it run? Of course, the goal is known, but currently how will it struggle, and where, and what is the national incubator that can cultivate it? … You need to again increase the level of interest, awareness, and incitement.”