During his recent meetings with Israeli officials, Canadian Foreign Minister Marc Garneau warned Israel that “continued building of settlements” is “provocative.” [The Jerusalem Post, July 6, 2021] However, the actions of a Canadian representative earlier in the year was more than provocative – it was a severe breach of Israel – Canadian friendship.

At a ceremony honoring female Palestinian entrepreneurs hosted by the PA Ministry of Women’s Affairs, Head of Cooperation at the Representative Office of Canada in the PA, Jason Tulk, together with PA Minister of Women’s Affairs Dr. Amal Hamad handed out an honorary plaque in the shape of the PA map of “Palestine” which entirely erases the State of Israel: 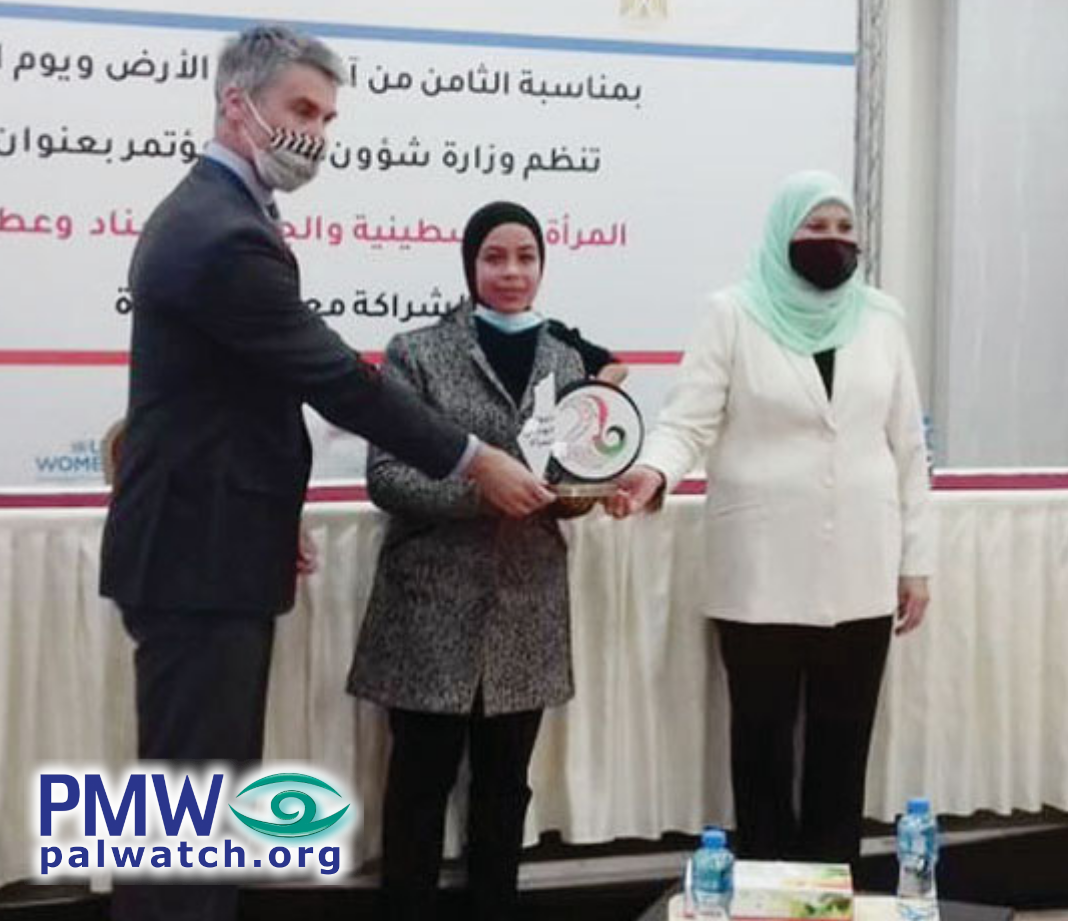 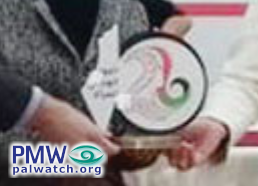 The use of this PA map replacing Israel with “Palestine” has been condemned by the international community. Former US President Barak Obama called it a security threat to Israel alongside terror:

Agreeing to hand out this particular map, which Palestinian Media Watch has exposed is used by the PA in all frameworks – from schoolbooks, to official logos, and cartoons in the official PA daily and more – the Canadian representative implicitly legitimized the PA vision of a world with only “Palestine,” and the destruction of the State of Israel.

As PMW has exposed, the PA and Fatah untiringly promote the ideology of “liberation” of “Palestine from the Sea to the River.” It is disappointing to see a Canadian government representative actively use such a symbol.

The following are longer excerpts of the reports cited above:

Headline: “The [PA] Ministry of Women’s Affairs honored a group of female entrepreneurs during Land Day and International Women’s Day in El-Bireh and Gaza”

“[PA] Minister of Women’s Affairs Dr. Amal Hamad honored a group of prominent women at the end of the press conference held by the ministry yesterday [March 30, 2021,] in the cities of El-Bireh and Gaza through the internet, under the headline ‘Women in the Shadow of the Epidemic – Support and Giving,’ and this was in partnership with the [PA] government’s general secretariat…

Director of Cooperation in the Canadian Representative Office Jason Tulk commented on the importance of the partnership with the governmental and private Palestinian institutions that are striving to strengthen the participation of women. He emphasized the continued Canadian aid to the Palestinian institutions and the funding of the various projects that serve the sectors of the women and youth.”

The article included a picture from the event showing Director of Cooperation in the Canadian Representative Office Jason Tulk on the left and PA Minister of Women’s Affairs Amal Hamad on the right awarding a woman with an honorary plaque, which features the PA map of “Palestine” that presents all of Israel together with the PA areas as “Palestine.”

Settlements have often been a point of tension between Israel and Canada, which otherwise are strong allies”

“Israel could reignite Palestinian violence if it persists with settlement building and evictions of east Jerusalem Arabs, Canadian Foreign Minister Marc Garneau told reporters Monday as he wrapped up his trip to the region.

“We need to lower the temperature,” Garneau said, adding that “we still have a fragile ceasefire,” referring to May’s 11-day Gaza war.

“From Canada’s perspective, it was important as a friend to Israel that we get the message across that the continued building of settlements and the evictions and demolitions in east Jerusalem should cease,” he said.

“That is potentially provocative at a time when we want to lower the temperature and not provide any excuse for it to flare up again,” he added.

Garneau said he underscored this message in his meeting with Prime Minister Naftali Bennett and other Israeli officials.

The Prime Minister’s Office did not issue a statement or photo of the meeting, and Bennett did not tweet about it, although he publicized his phone conversation with Russian President Vladimir Putin.

The trip marked Garneau’s fifth visit to Israel and his first since he took office in January. He is also the first foreign minister to arrive in the country since the government was sworn in last month.”