While pledging allegiance to “Palestine” at an event organized in Lebanon by the Palestinian Scout Association (PSA) and the Fatah Movement Scout Office, adult and child scouts appeared to make the Nazi salute.

The scout sign – or the three-finger-salute – is usually made with the three middle fingers touching the brow while the thumb and the little finger are folded and the palm faces out. However, the Palestinian scouts at the ceremony in Lebanon stretched their arms diagonally into the sky, thus making the scout sign look like the salute used by the Nazis:

Official PA TV chose to include the vow to “Palestine” and the Nazi-like salute as part of a 3-minute news item about the scouts’ event, which took place in the Maroun Al-Ras area on the border between Lebanon and Israel: 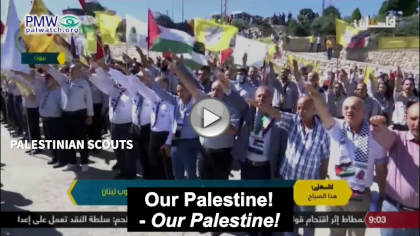 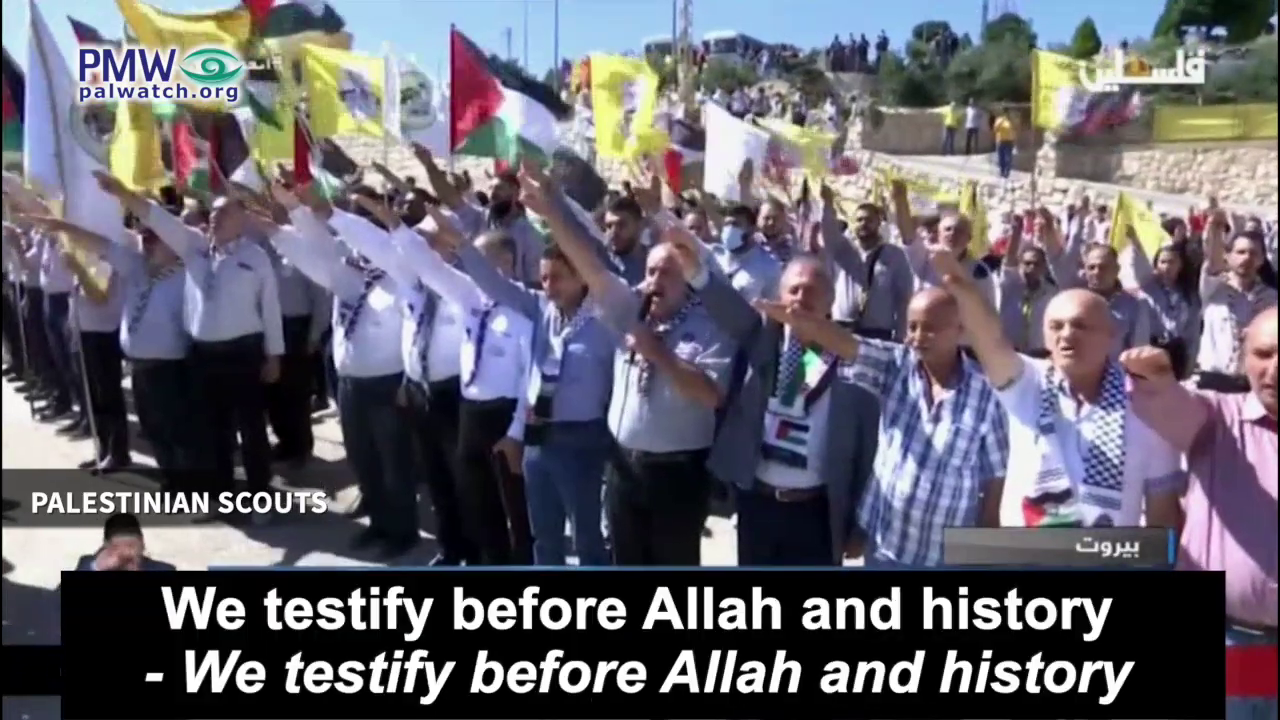 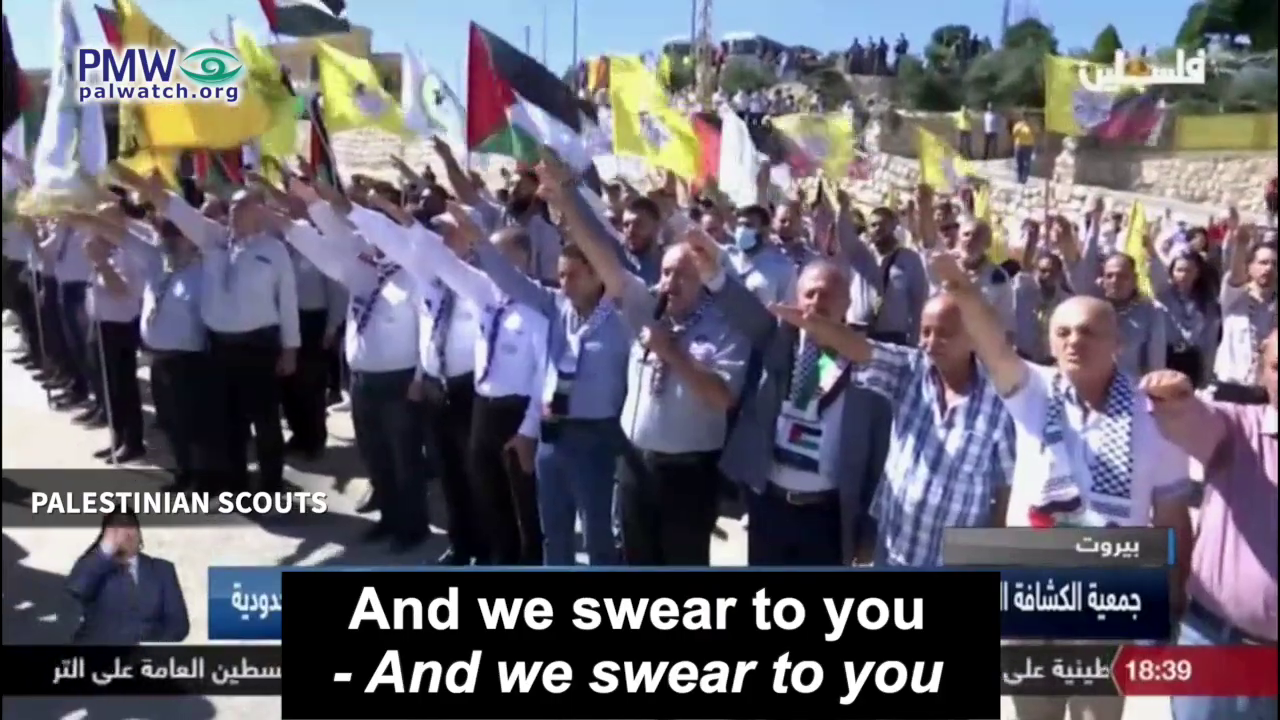 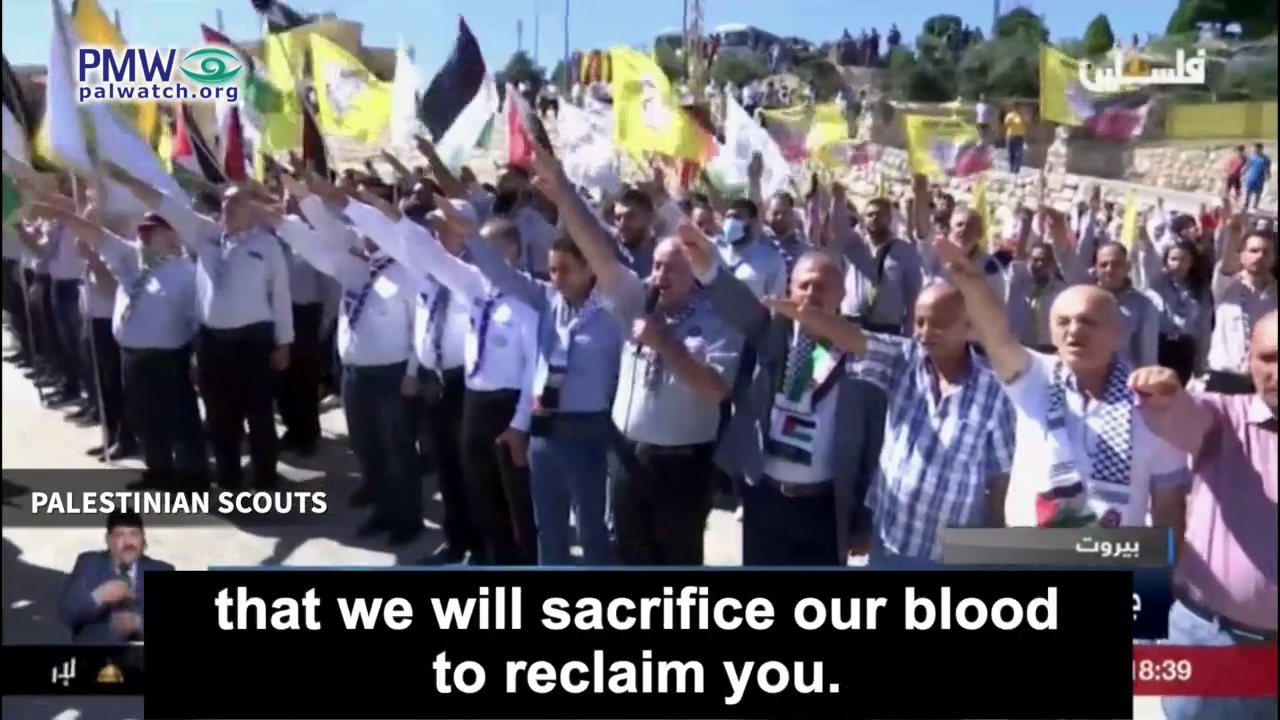 Official PA TV newsreader: “To Lebanon, where the Palestinian Scout Association (PSA) and the Fatah Movement Scout Office organized an activity for young people in the Maroun Al-Ras area on the border [with Israel]. The participants pledged allegiance to Palestine…”

We testify before Allah and history,

And we swear to you

that we will sacrifice our blood to reclaim you.”

The Nazi-like salute was made by everyone present, both the Lebanese Palestinian scouts and their supervisors. The scouts’ vow to “sacrifice our blood to reclaim you [Palestine],” shows the violent politicization of the Lebanese/Palestinian branch of the international scouts youth movement.

Among the speakers was Secretary of the Fatah Scouts Office in Lebanon Khaled Awad, who stressed that there will be no “normalization” with Israel, but rather Israel will cease to exist. He taught the assembled scouts that “the liberation of Palestine… from the [Jordan] River to the [Mediterranean] Sea” is “a national and religious duty”: 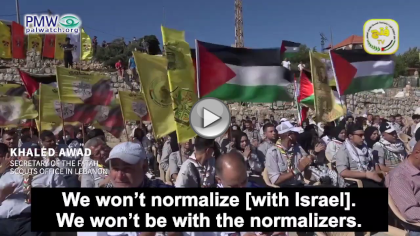 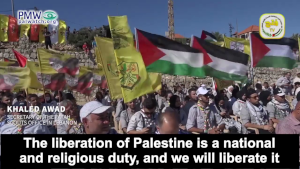 Secretary of the Fatah Scouts Office in Lebanon Khaled Awad: “As for [Israeli PM] Netanyahu, or the great stinker [former US President] Trump who was uprooted and left never to return, [PA] President Abbas told them: ‘Curse the fathers of the deal of the century’ (i.e., Trump’s Middle East peace plan). May Allah’s curse be upon them to the end of time! We won’t normalize [with Israel]. We won’t be with the normalizers. The liberation of Palestine is a national and religious duty, and we will liberate it from the [Jordan] River to the [Mediterranean] Sea, whether they like it or not.”

A scout interviewed at the event stressed that youth from the age of 8 and up are taught to be “a second army to liberate Palestine”: 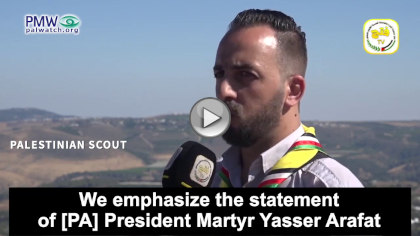 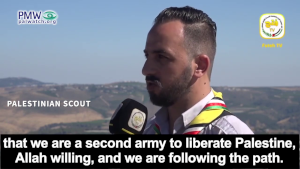 Narrator of Fatah TV (Lebanon): “The Palestinian flag was waved high while accompanied by the scouts’ salute…”

We won’t forget you

We won’t accept any homeland but you

We testify before Allah and history,

and we swear to you

that we will sacrifice our blood to reclaim you

and may we live until our victorious return.”

Palestinian scout: “The scouts are from all the age groups… from age 8 to an unlimited age… We are passing from generation to generation the love for Palestine, loyalty to Palestine, and defense of Palestine. We emphasize the statement of [PA] President Martyr Yasser Arafat that we are a second army to liberate Palestine, Allah willing, and we are following the path.”

A member of the Palestinian Scout Association seconded the goal of the “liberation of Palestine,” stressing that the participating scouts were “mostly young” and that they belong to “the generation of liberation and victory that will happen”:

Palestinian Scout Association member Muhammad Al-Mughayer: “These people are mostly young. Therefore, they are the generation of liberation and victory that will happen… We are coming to stand here to say that Palestine is near and we will yet return to it.” 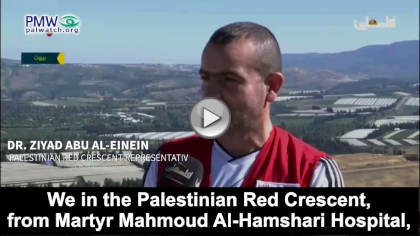 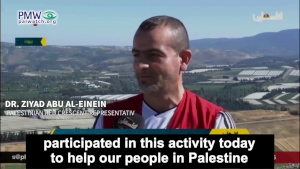 At the event, speeches were given by officials from Fatah and Hezbollah – an internationally designated terror organization. A huge poster of Imad Mughniyeh – a Lebanese terrorist and senior member of Hezbollah who was linked to major international terror attacks (see below) – adorned the ceremony. 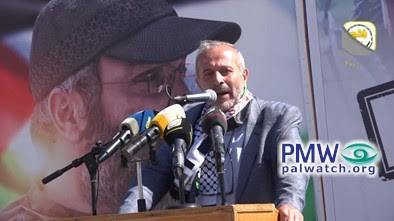 Palestinian Media Watch has exposed that Palestinian students, youth, and activists have used the Nazi salute in the past.

For example, students at Bir Zeit University made the Nazi salute during protests over the cost of tuition and other financial matters, and over the university’s ban on military expression on campus: 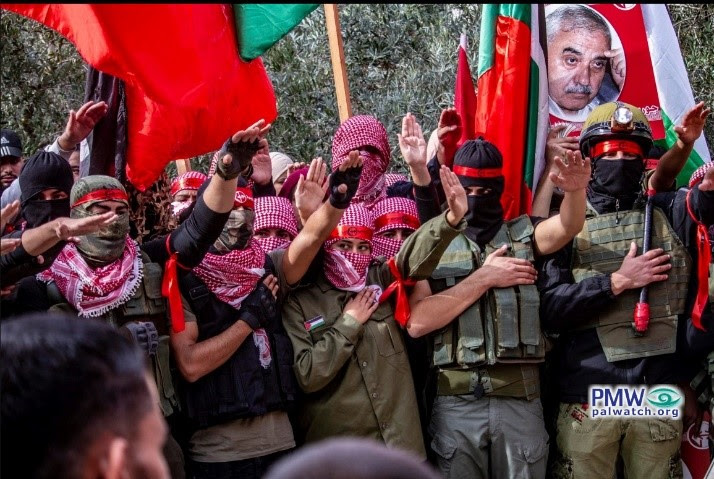 Fatah youth also performed the Nazi salute at a Fatah ceremony, in which they vowed to “be loyal to Palestine” and willing to “sacrifice everything I can for its liberation”: 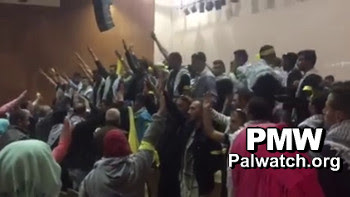 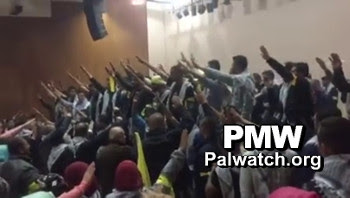 Secretary of the Fatah Scouts Office in Lebanon Khaled Awad’s mention of “the normalizers” is a reference to Arab states and others that normalized relations with Israel during US President Trump’s term of office:

Israel-UAE peace agreement (Abraham Accords) – an agreement normalizing diplomatic ties between Israel and the United Arab Emirates (UAE), which was announced on Aug. 13, 2020, under the mediation of US President Donald Trump. Pursuant to the agreement, the countries will discuss bilateral cooperation on a number of topics. In exchange for the agreement, Israel agreed to suspend its previously announced plans to apply Israel’s civilian law to parts of Judea, Samaria and the Jordan Valley as per the Trump peace plan. The US announced that “Muslims throughout the world who wish to come in peace to pray at the Al Aqsa Mosque, will now be able to fly to Tel Aviv through Abu Dhabi to do so and will be welcomed.”