Fatah: “Palestine from the Sea to the River” – will be liberated 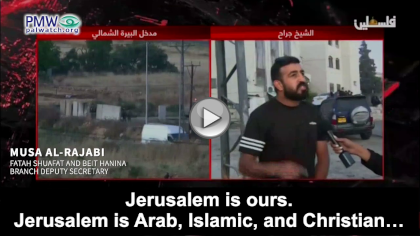 Toward the end of the recent Fatah/Hamas riot and rocket war, a Fatah official repeated what Palestinian Media Watch has pointed out repeatedly over the last two and a half decades: Fatah – like Hamas – tells Palestinians that Fatah’s ultimate goal is Israel’s destruction.

Using the well-known Palestinian slogan “from the Jordan River to the Mediterranean Sea” to define the area of “Palestine,” the Deputy Secretary of Fatah’s Shuafat and Beit Hanina branch, Musa Al-Rajabi, vowed that Palestinians will continue to fight Israel until “the liberation of Palestine”: 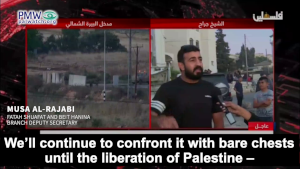 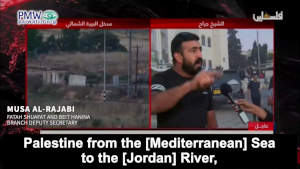 Fatah Shuafat and Beit Hanina Branch Deputy Secretary Musa Al-Rajabi: “We are remaining here. Jerusalem won’t agree to being divided in two. Jerusalem is ours. Jerusalem is Arab, Islamic, and Christian… We’ll protect Sheikh Jarrah as we’re protecting the Al-Aqsa Mosque. We’ll protect the Damascus Gate as we’re protecting the Lions’ Gate. We’ll rise up every day against this tyrannical occupation that is heavily armed … We’ll continue to confront it with bare chests until the liberation of Palestine – Palestine from the [Mediterranean] Sea to the [Jordan] River, Palestine which is Arab and Islamic. It will remain ours.”

This message was reinforced by Fatah and the PLO in this year’s Nakba logo – The Nakba being “the catastrophe” of the establishment of the State of Israel: 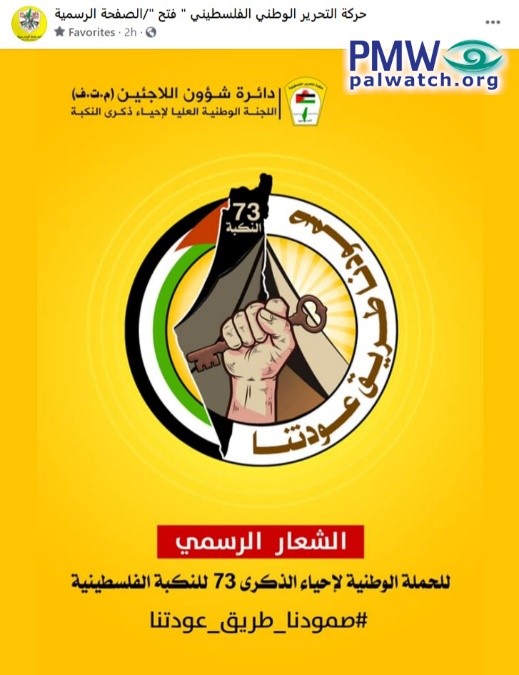 The logo shows the PA map of “Palestine” that presents all of Israel together with the PA areas as “Palestine,” with “73 [years since] the Nakba” written on it. To the left of the map is a Palestinian flag, and to the right of it is an upraised fist holding a key symbolizing the Palestinian refugees’ “right of return.”

Text right of logo: “Our resolve is the path to our return.”

At the top of the image is the PLO logo featuring a flame, the Palestinian flag, and the PA map of “Palestine.”

Text to left of PLO logo: “The PLO Department of Refugee Affairs
The Supreme National Committee to Commemorate Nakba Day”

Text at bottom of image: “The official logo
Of the national campaign to commemorate the 73rd anniversary of the Palestinian Nakba
#Our_resolve_is_the_path_to_our_return”

Promising to liberate “Palestine” from the river to the sea is just one of the many terminologies used by PA/Fatah leaders to promise Israel’s destruction. Here is another example of a senior PA leader using this term: