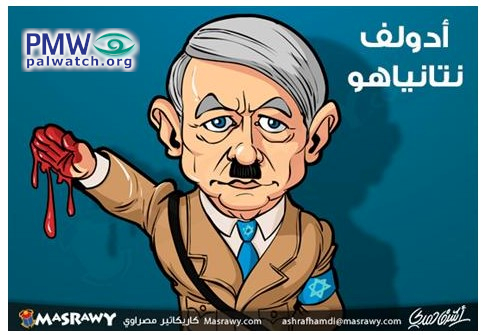 As part of its propaganda campaign to delegitimize the State of Israel, the Palestinian Authority regularly demonizes Israel and Israeli leaders by comparing them to Nazis and Nazism.

Here follows a partial selection of examples that have appeared in official PA media in recent years.

Headline: “He killed the Palestinians with the weapon of racism!”
Text on cartoon: “Adolf Netanyahu”

[Website of the Fatah Commission of Information and Culture, Feb. 16, 2021]

While PA TV showed visuals of the Nazi destruction of Jewish businesses and synagogues during Kristallnacht, the PA TV host said:

“They [Israel is] doing to the Palestinians precisely what Hitler did to them. What Eichmann did to the Jews in Austria, they’re doing- Naftali Bennett is doing to us, exactly. They have copied the experience.”

Op-ed in official PA daily: Israel is most similar to Nazi Germany

“Approximately 73 years after its foundation, Israel is becoming a state most similar to Nazi Germany, a technologically advanced but ideologically failed state.”

Official PA TV host: “Daily acts on the ground, violence by the settlers, ongoing attacks by the occupation – these are different forms of discrimination and inequality, which we sometimes saw in the Nazi regime and also in the apartheid regime in South Africa. Now the occupation state is repeating them and implementing them.”

Hebron has been “Judaized” into a “ghetto that is similar to the Nazi period,” claims activist.
https://palwatch.org/page/18676

Association of Human Rights Defenders member Badi’ Dweik: “The occupation has significantly succeeded in Judaizing a large part of Hebron and turning Hebron into a ghetto. Therefore we must dismantle this ghetto, which is the settlements, and which is similar to the Nazi period…”

“The Palestinians in the Interior (i.e., Palestinian term for Israel) / the 1948 Arabs are those who stayed on the land after the first stage of the occupation of Palestine (i.e., the establishment of the modern State of Israel in 1948), and they are those who experienced ugly treatment and inhumane methods from the occupier that were used against them to expel them from their land and force them to leave. Means more cruel and despicable than what the Nazis did to the Jews were used against them. Therefore, the suffering of the Arabs of the Interior is no less intense than the suffering that their refugee and uprooted brothers dealt with.”

PA Minister of Justice Muhammad Al-Shalaldeh: “The International ‎‎[Criminal] Court (ICC) has full authority for judging and extradition. The ‎Israeli settlers, or the Israeli war criminals… There will be a list of ‎names that may begin – We can investigate the [Israeli] prime ‎minister… The ICC will act according to a legal plan, according to the ‎legal measures for extradition and prosecution, and there were ‎experiences with this after World War II: the court in Nuremberg and ‎in Tokyo for prosecuting and punishing the Nazis.”‎

Fatah Central Committee Secretary Jibril Rajoub: “[After Trump’s election,] the American administration [was] cooperating with the path of the fascist right-wing that is being led by Netanyahu, the ugly face of Mussolini and Hitler… [The Israelis] have exploited the issue of the Holocaust… They were slaughtered in Europe. It was a despicable massacre, and we all oppose it and do not accept it, but we did not do it! Neither we as Arabs nor we as Muslims. What is happening in Palestine is a second holocaust. We are 14 million people who are being eliminated and erased geographically, historically, humanly, religiously, and culturally. The slaughter- of course, in the 21st century [the occupation] can’t do what was done in the 1940s, but what is the difference? … They are the criminals. They are the murderers. They are the lowly ones. They are doing what happened to them to the Palestinians.”

Fatah Central Committee Secretary Jibril Rajoub: “At this circus (i.e., ‎signing of peace treaties at the White House),… What happened is [the result of] dictates from the current fascist ‎administration, and this racist whose name is Netanyahu who is a ‎distorted copy of Mussolini, and of everything that happened in the ‎‎1930s and 1940s in Europe.”‎
[Official PA TV, Sept. 15, 2020]‎

Official PA TV reporter: “The struggle here is unusual, the struggle is over the land and over the right to be [on it], between a Nazi occupation that is using all the racist means to impose its full rule on the valleys, and those with a right and cause who have nothing but resolve.”

“The assassination of prisoners in their prison (refers to the death of a terrorist in jail) is nothing but a war crime, exactly like the crime of the Nazi Holocaust that the world condemned, put its perpetrators on trial, and imposed a just sentence on them.”

“Israeli affairs expert” Fayez Abbas: “Look at the picture [of Netanyahu], how his face looks. He is raising his hand like this. He should have done it a bit like this, the Nazi salute, of Hitler. It is similar to it, just a little different. Because he is careful in these matters, he left [his hands] like this… Goebbels was the propaganda minister in the period of Nazi Germany, and apparently Netanyahu read Goebbels’ books and he is Goebbels’ outstanding student.”

Rajoub: “Goebbels and Mussolini are the spiritual fathers of the racist fascist culture that Netanyahu is implementing”
https://palwatch.org/page/17833

Fatah Central Committee Secretary Jibril Rajoub: “In other words, first of all, Netanyahu is proving that he is a continuation of fascism and Nazism. [Nazi Minister of Propaganda Joseph] Goebbels and [Italian Prime Minister Benito] Mussolini are the spiritual fathers of the racist fascist culture that Netanyahu is implementing against the Palestinian people.

Protesting a US-led conference in Warsaw in February to discuss peace and security in the Middle East, Fatah Central Committee Secretary Jibril Rajoub stated: “in every city in Palestine, from Rafah to Jenin, there is an Israeli Auschwitz to massacre Palestinians.”