In the PA, Equal rights for women, means equal “right” to murder

Top PA official Jibril Rajoub has asserted that Fatah is a champion of equal rights for women. The proof is that the PA/Fatah also sends women, just as it sends men, to carry out murderous terror attacks:

“If we didn’t have a culture like this [of equal rights for women], would we have wanted Dalal Mughrabi to lead an operation like this (i.e., the most lethal attack in Israel’s history in which 37 Israelis were murdered) and Fatima Barnawi (i.e., who placed a bomb in a movie theatre)?”

Arguing for the legitimacy of this ideology, Rajoub explained “Sure” they should be honored. He then singled out for “praise” some of Fatah’s most notorious arch-terrorists: Abu Jihad who orchestrated attacks in which at least 125 Israelis were murdered; Abu Iyad who headed the terror organization Black September that carried out the murder of 11 Israeli athletes at the Munich Olympics in 1972; and Yasser Arafat, who – among other terror – orchestrated the PA’s 4-year terror campaign “the Al-Aqsa Intifada” in which over 1,100 Israelis were murdered mostly by suicide bombers.

“Rajoub further emphasized that today’s Palestinians are “their (i.e., the arch-terrorists) followers and soldiers” who were “educated in their schools”: 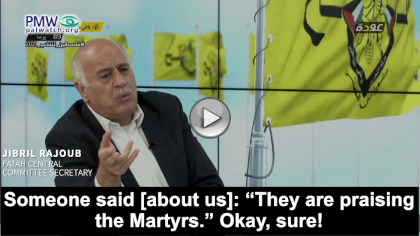 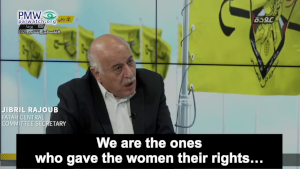 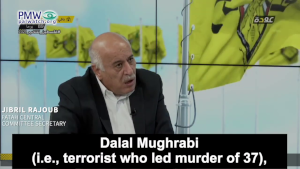 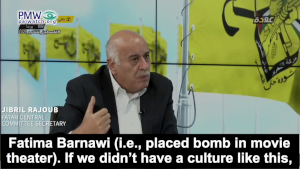 Fatah Central Committee Secretary Jibril Rajoub: “Someone said [about us]: ‘They are praising the Martyrs.’ Okay, sure! We are their followers. We are their soldiers. We were educated in their schools… Sure, I praise Abu Jihad, Abu Iyad, Yasser Arafat, and all these stars who are the ones who destroyed all the obstacles, broke through all the barriers, and created Palestinian nationalism for us. Why should we not praise them? …

The [Legislative] Council (i.e., the Palestinian Parliament) should be a beacon. A beacon for the entire world that will reflect the power of the Martyrs, prisoners, and all the fighters – and every Palestinian is a fighter.”

Dalal Mughrabi – female Palestinian terrorist who led the most lethal terror attack in Israel’s history, known as the Coastal Road massacre, in 1978, when she and other Fatah terrorists hijacked a bus on Israel’s Coastal Highway, murdering 37 civilians, 12 of them children, and wounding over 70.

Fatima Barnawi – Palestinian female terrorist who placed a bomb in a movie theater in Jerusalem in 1967. The bomb failed to explode. She was sentenced to life in prison but was released in 1977 after serving 10 years. In 2015, PA Chairman Mahmoud Abbas honored Barnawi with the Military Star of Honor.