The Coronavirus has served as a breath of fresh air for the PA libel that Israel ‎medically neglects and abuses Palestinian terrorist prisoners. Whereas COVID-19 ‎has provided new raw material for libels against Israel in general, Palestinian Media ‎Watch has exposed that the PA in particular has exploited the pandemic to repeat ‎the libel about Israeli abuse of imprisoned Palestinian terrorists. ‎

It really doesn’t matter what Israel does in terms of dealing with the Coronavirus in ‎connection with the terrorist prisoners. If Israel doesn’t vaccinate the prisoners, the ‎PA criticizes it for “neglecting” the Palestinian prisoners and even “deliberately ‎exposing” them to the virus. If Israel does vaccinate them, the PA claims Israel is ‎using them as guinea pigs and conducting medical experiments on them. Israel is ‎damned if it does and damned if it doesn’t. ‎

During the pandemic the PA has

– alleged that Israel deliberately exposed the terrorist prisoners to the ‎Coronavirus.

– complained that Israel wasn’t protecting the terrorist prisoners from the ‎virus.

– claimed Israel was using the virus as “a tool of abuse” to further harm ‎the terrorist prisoners by isolating them (when the Prison Service was ‎actually following the Coronavirus guidelines for isolation to protect them ‎from further spreading of the disease.)

Some of these libels were printed by the official PA daily. The paper’s regular ‎columnist Muwaffaq Matar – who is also a member of Fatah’s Revolutionary Council ‎member – claimed Israel is using the Coronavirus as “a new weapon” with which it ‎carries out a “war crime” – an alleged “plan of tormenting and killing the prisoners ‎slowly and indirectly”:‎ 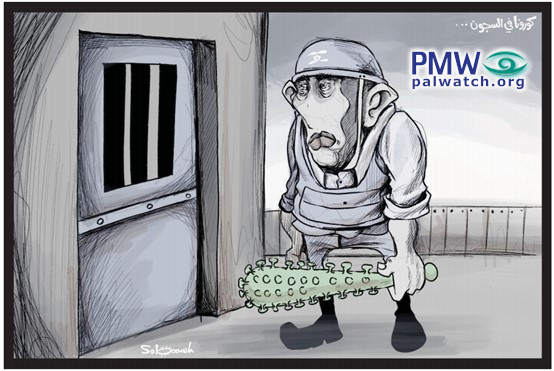 Text on cartoon: “Coronavirus in the prisons”‎

The cartoon shows a grotesque depiction of an Israeli prison guard standing in front ‎of a prison cell door and holding a green club with Coronavirus spikes protruding ‎from it. ‎ 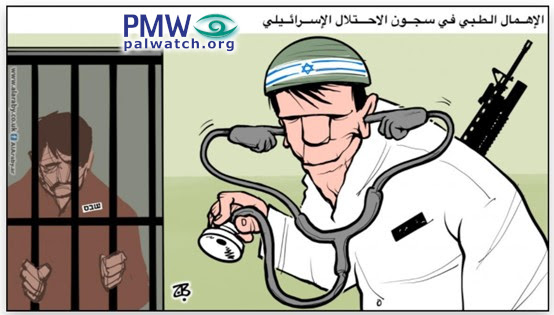 [Website of the Fatah Commission of Information and Culture, Jan. 31, 2021]‎

A recent Palestinian Media Watch report documented Palestinian criticism of Israel ‎for helping young Palestinians by offering them free training. Israel was ‎condemned for giving Palestinian youth free loans and grants, which were referred ‎to as “an attack” to cause “Israelization” among them.

Whether it helps Palestinians or not – it’s always a no-win situation for Israel. ‎

The following are longer excerpts of the statements cited above:‎

Excerpt of an op-ed by Muwaffaq Matar, Fatah Revolutionary Council member and ‎regular columnist for the official PA daily

Headline: “War crime – Tormenting the prisoners with the Coronavirus!”‎

“The Israeli racist occupation system found a new weapon in the Coronavirus, ‎which it is using [as part of] a plan of tormenting and killing the prisoners ‎slowly and indirectly (sic., see note below regarding PA libel on medical abuse of ‎Palestinian prisoners), while exploiting the world’s preoccupation with finding ‎preventive measures and preventive treatment. The policy of medical neglect has ‎been one of the prison authorities’ measures against the Palestinian prisoners, ‎even after their release, and a way of getting rid of those who they succeed in ‎reaching the weak points in their health, or by physically weakening them while ‎imperceptibly transferring an illness to them. Regarding the Coronavirus, it has ‎made the act of tormenting the prisoners easier for them through its symptoms ‎that cause physical pain and have an emotional impact. This is while using the ‎uniqueness of the illness’ spread and the virus’ quick violent assault in achieving ‎high numbers of infected people among the detained prisoners. Since it is enough ‎for there to be one executioner from the occupation forces who is sick with the ‎Coronavirus in order to infect hundreds of prisoners in mere days – considering ‎the crowded prison rooms, or the inhumane conditions in isolation and when ‎transferring the prisoners to the hospitals – this enables the ideology of imposing ‎terror on the prisoners and their relatives which the occupation authorities are ‎working diligently at, and it appears that the desire of its leaders and officers is to ‎continue committing war crimes against the prisoners and to violate the ‎international laws and treaties under the cover of the Coronavirus epidemic.”‎

Libel on medical abuse of Palestinian prisoners – the PA claims that Israel abuses Palestinian prisoners, through medical neglect, medical experiments, and by intentionally infecting them with diseases. However, the International Red Cross regularly visits these prisoners and has not documented or accused Israel of any of these claims. Likewise, lists of demands occasionally issued by the prisoners during hunger strikes – such as during one in 2011 – include no demands relating to these claims. PMW has documented prisoners talking about how they “lack nothing” in the prisons, and that “the worst thing about Israeli prison” is riding in a prison vehicle that has no padding on the seat. When PMW contacted the Israeli Ministry of Health in 2007 regarding PA claims of medical experiments on prisoners, the ministry responded: “Clinical testing on prisoners in prison was never approved, never performed, and is most certainly not taking place at present.”

Headline: “The prisoners of Ashkelon Prison receive the first dose of the ‎Coronavirus vaccine”‎
‎“The [PLO] Commission of Prisoners’ Affairs announced yesterday [Feb. 7, 2021] ‎that the prisoners of Ashkelon Prison (i.e., Shikma Prison) have received the first ‎dose of the Coronavirus vaccine, except one prisoner who refused to receive the ‎vaccine. The commission explained in a statement that the prisoners are currently ‎waiting to receive the second dose, which is expected to be given next week.‎

It noted that there is clear concern and worry for the fate of these prisoners, ‎especially in light of the long historical experience with the policy that the ‎occupation’s Israeli Prison Service has implemented against the prisoners ‎throughout the recent decades, including using their bodies for experiments ‎‎(sic., see note below regarding the PA libel on medical abuse of Palestinian ‎prisoners).”‎

It should be noted that since the outbreak ‎of the epidemic, the occupation’s ‎Israeli ‎Prison Service has worked to turn it into a ‎tool of abuse against the ‎prisoners ‎through a series of measures whose goal ‎was to impose more ‎isolation and control ‎on the prisoners, which worsened the ‎conditions of ‎imprisonment (sic., see note ‎below).”‎

Headline: “The [PA-funded] Prisoners’ Club demands a medical committee that will ‎supervise the Coronavirus vaccinations for the prisoners”‎

“The [PA-funded] Prisoners’ Club demanded yesterday [Dec. 23, 2020] that the ‎World Health Organization (WHO) pressure the occupation to allow there to be a ‎neutral medical committee, with the participation of the Red Cross, that will ‎supervise and observe the process of vaccinating the prisoners in the occupation’s ‎prisons [against the Coronavirus].‎

The Prisoners’ Club demanded this on the guarantee of confirmed information, ‎according to which the Israeli Prison Service has taken the names of prisoners and ‎received lists in principle of prisoners who are interested in receiving the vaccine.‎

The Prisoners’ Club emphasized: ‘The decision to give the vaccine is an important ‎demand that we have already raised in the past a number of times, while giving ‎priority to those who are sick and the elderly among them, but this requires the ‎supervision of a neutral third-party over the process. This is because since the ‎beginning of the epidemic’s spread, the Israeli Prison Service is continuing to ‎provide the exclusive version regarding the epidemic (i.e., no other body is reporting ‎on the situation in the prisons), especially on everything connected to the results of ‎the prisoners’ [Coronavirus] tests, and to turn the epidemic into a tool to oppress ‎and abuse the prisoners (sic., see note below).’ …‎

The [Prisoners’] Club said: ‘We are emphasizing this demand at a time when the ‎occupation’s Israeli Prison Service is continuing to execute a policy of abuse… ‎that throughout the recent decades, according to hundreds of facts and pieces ‎of evidence, has caused prisoners to become sick with chronic and dangerous ‎illnesses that has led to the deaths of dozens of them – including four prisoners ‎who have died as Martyrs since the beginning of the year [2020] – and this is in ‎addition to concerns about the prisoners’ bodies being used for experiments.’”‎