The 41st and final Nefesh B’Nefesh group flight of 2020 landed at Ben-Gurion International Airport on Dec. 30 with 48 new immigrants joining the 3,168 individuals who made aliyah from North America in the last year—2,625 since the start of the coronavirus pandemic.

In the past year, 811 families chose to move permanently to Israel, along with 1,032 singles and 332 retirees. Some 61 physicians and 198 medical professionals arrived, most joining the frontlines in Israel’s fight against COVID-19, as well as 390 young men and women who stepped off the plane with the goal of serving Israel as lone soldiers.

In addition to those who arrived throughout 2020, Nefesh B’Nefesh received 6,704 aliyah applications (compared to 3,035 in 2019), marking a 126 percent increase in interest in relocating to the Jewish state.

“As we look back at the challenges everyone faced in 2020, we are proud of what we have accomplished together,” said Rabbi Yehoshua Fass, co-founder and executive director of Nefesh B’Nefesh. “We look forward to watching olim grow and build their new lives in Israel.” 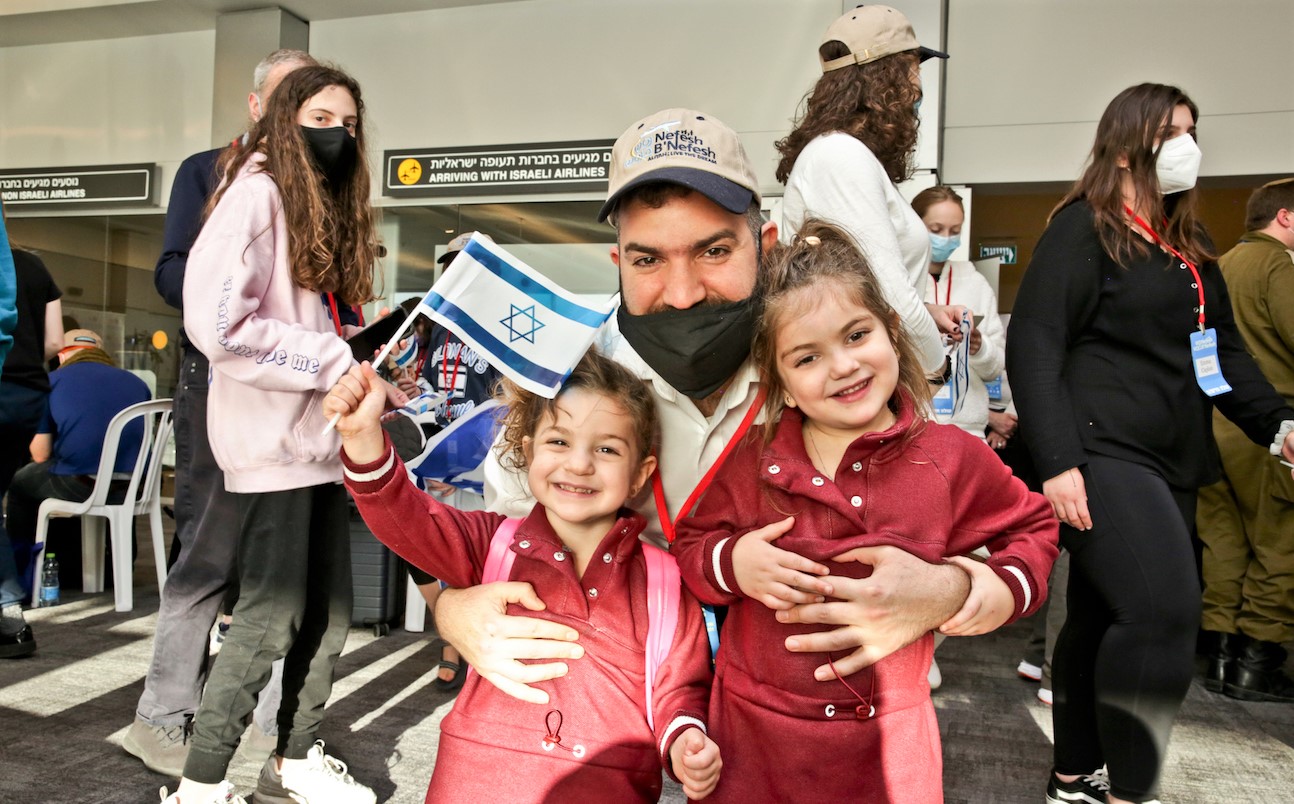 Mayer Kadoch with daughters Devorah and Rachel at Ben-Gurion International Airport on the last Nefesh B’Nefesh group aliyah flight of the year. His wife and two other young daughters were nearby, Dec. 30, 2020. Photo by Yonit Schiller.

The major cities in Israel chosen as new homes to olim were Jerusalem, Tel Aviv, Beit Shemesh, Ra’anana, Haifa, Herzliya, Netanya, Modi’in and Beersheva. Arrivals most commonly worked as educators, physicians, nurses, social workers and lawyers, as well as in the fields of marketing, sales and business. The average age of a new immigrant in 2020 was 30, with the oldest being a 97-year-old and the youngest just a month old.

When the pandemic began in March 2020, Nefesh B’Nefesh pivoted its various programming and transitioned into holding virtual meetings, webinars and informational sessions, enabling the organization to reach a wider audience than usual.

Through its online operations and due to increased demand, it hosted 113 online informational events (compared to 27 in 2019) with a total of 15,277 participants (compared to 1,953 in 2019). Seminars have included a wide range of subjects—from choosing schooling, careers and communities to how to pack and ship for aliyah.