Mohammed Shtayyeh (left) accepts the position of prime minister of the Palestinian Authority and the duty to appoint a new government from P.A. leader Mahmoud Abbas. Shtayyeh took office on April 14, 2019. Credit: JCPA.

In a speech at a Christmas dinner, the PA’s Prime Minister, Muhammad Shtayyeh, repeated the PA’s historically false narrative, turning Jesus into a “Palestinian.” He further insulted Christianity saying that Jesus was “the first Palestinian self-sacrificing fighter” and the one who taught Palestinians “Martyrdom-death”:

PA Prime Minister Shtayyeh: “Our lord Jesus, peace be upon him – the first Palestinian self-sacrificing fighter from whom we learned Martyrdom-death, and who paid for his mission with his life.”

The Prime Minister’s categorizations of Jesus are insulting to Christians and Christian tradition in many ways: 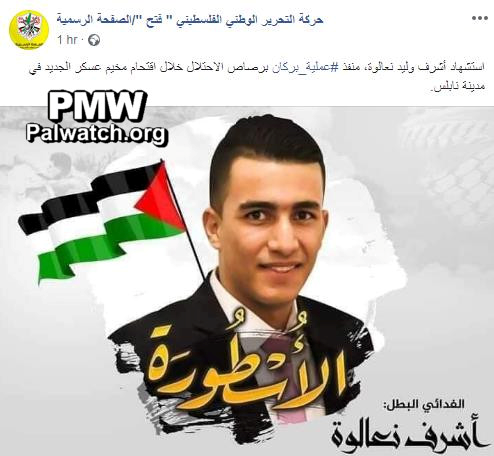 The PA uses the expression “self-sacrificing fighter,” (Fida’i) for terrorists who have been fighting and murdering Israelis since 1965, including the most loathsome murderers. For example, Palestinian terrorist Ashraf Na’alwa shot and murdered his 2 Israeli coworkers, Kim Levengrond-Yehezkel, a young mother of a one-year-old infant, and Ziv Hajbi, a young father of three. Fatah glorified the murderer repeatedly including this post on its official Facebook page, which called him: “The legend, the heroic self-sacrificing fighter (Fida’i) Ashraf Na’alwa” [Official Fatah Facebook page, Dec. 13, 2018]

Defining Jesus who preached non-violence (see Matthew 5:39: “Do not resist an evil person. If anyone slaps you on the right cheek, turn to them the other cheek also”) as a “self-sacrificing fighter” in the category with Palestinian murderers is a desecration.

2. PA PM Shtayyeh: “Jesus … from whom we learned Martyrdom-death.”
The PA’s presentation of Jesus as one who taught Palestinians “Martyrdom-death,” is a grave insult to Christians as well, since the PA promotes Martyrdom-death as something to be aspired due to the rewards in Paradise, among which according to Islam’s tradition the “Martyr” marries 72 dark-eyed virgins. For example, this popular music video has been broadcast on Fatah and PA TV since 2017 right through 2020:

Palestinian Media Watch has exposed repeatedly that the PA inculcates the ideal of becoming a “Martyr” for “Palestine” into the minds of the Palestinian population.

3. PA PM Shtayyeh:  Jesus was “a Palestinian”
This too is an insult to Christianity, as the Christian Bible clearly presents Jesus as a Jew living and interacting with other Jews in the nation of Judea.

Especially around Christmas time, but not exclusively, PA leaders repeatedly publicize their false PA narrative that Jesus was a “Palestinian.” Palestinian Media Watch recently published a collection of such statements, and since then, this falsification of history has continued: 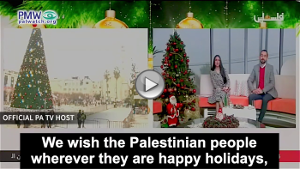 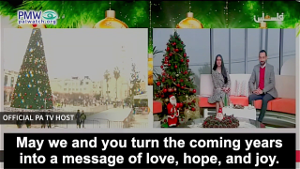 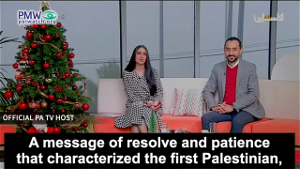 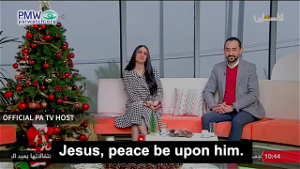 Official PA TV host: “We wish the Palestinian people wherever they are happy holidays, health, and all the best. May we and you turn the coming years into a message of love, hope, and joy. A message of resolve and patience that characterized the first Palestinian, Jesus, peace be upon him.”

4. Moreover, Shtayyeh linked Jesus’ Martyrdom to the “thousands of Martyrs” who have died for “Palestine”:

PA PM Shtayyeh: “The birthday of our lord Jesus… takes place at the same time as the anniversary of the outbreak of the Palestinian revolution (i.e., its first terror attack against Israel called “the Launch” of Fatah), for which thousands of Martyrs have paid with their lives.”
[Official PA daily Al-Hayat Al-Jadida, Dec. 28, 2020]

Linking Jesus to the thousands of Palestinian “Martyrs,” which is the term the PA uses to define all its suicide bombers as well as all terrorists who were killed while attacking Israelis, is yet an additional desecration of Christianity.