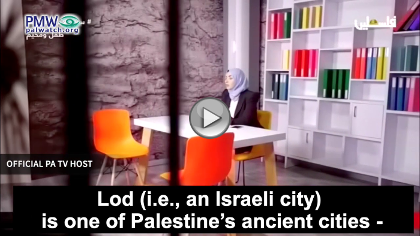 Palestinian children who were born decades after Israel’s establishment in 1948 and decades after the Oslo Accords peace agreement are being educated by the PA to envision themselves as residents of the cities “stolen by the Jews,” and as “refugees” temporarily living in the Palestinian territories. They are brought up to believe that in the future they will “liberate Palestine” and live in a world with no Israel.

This was made clear on a children’s program named A Child and a Refugee Camp on official PA TV. Palestinian kids were taught, through the words of a 12-year-old boy, to see themselves as suffering victims of “the Jews” – not “the Israelis” who were not mentioned at all. However, the children were taught that this is a state of temporary suffering only, because their “return” to “Palestine”- meaning all of Israel – is assured.

The 12-year-old boy was interviewed about his “yearning” for Lod – an Israeli city. He told the TV host that he dreams about the airport which was “Judaized and called Ben Gurion [Airport],” by what he calls “the occupation” – the Palestinian term for the entire State of Israel. Finally, the 12-year-old expressed his hope and confidence that “tomorrow” the Palestinians “will return and liberate Palestine”: 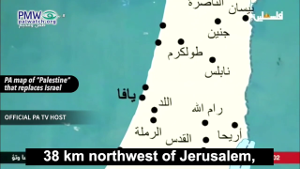 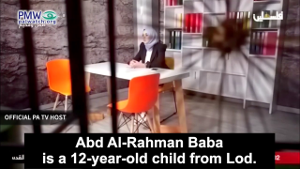 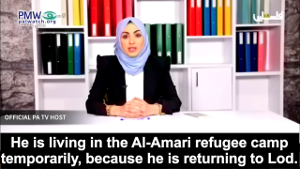 Text on screen: “I will certainly return”

Host: “Abd Al-Rahman Baba is a 12-year-old child from Lod. He is living in the Al-Amari refugee camp temporarily, because he is returning to Lod. Lod is inside him, and his yearning is there.”

Abd Al-Rahman Baba: “The Jews stole our land from us, and I have been waiting 12 years already, my father 40 years, and my grandfather has been waiting 70 years… The Jews took our land by force and settled us in the [refugee] camps. I hope to return to Lod, my city…”

Host: “Do you feel that tomorrow we will return?”

Host: “This is the Palestinian child refugee… There is no replacement for the return. Nothing will make them forget the homeland from which they were expelled.”

The map of “Palestine” featured in the broadcast misrepresents the following Israeli cities and places as in “Palestine”: The Galilee, The Negev desert, Safed, Tiberias, Nazareth, Beit Shean, Jaffa, Lod, Ramle, Beer Sheva, and Jerusalem.

Palestinian Media Watch has exposed that the PA does everything it can to maintain the identity as refugees for Palestinians, and particularly for children.

The popular children’s host Walaa Al-Battat as policy teaches her young viewers that it is only a question of time before “we will return to our land,” and that Israel will come to an end. Earlier this month, she told kids “Allah willing, one day our entire land will return to us”: 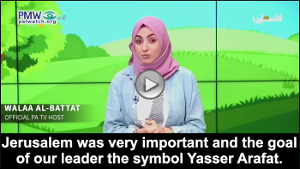 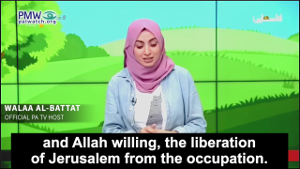