PA: “We are prepared to sacrifice… We will sacrifice our children”‎ 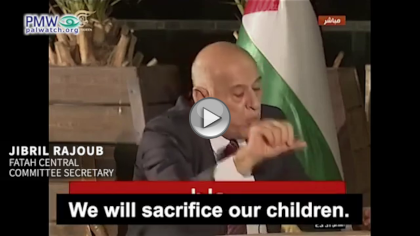 PA Chairman Abbas’ special emissary Jibril Rajoub continues to meet and plan a ‎unified “escalation of the resistance” together with “the factions” – terror organizations ‎that include Hamas, Islamic Jihad, and PFLP. According to Rajoub, this “escalation” ‎will include “sacrifice” of Palestinian children:‎

“We are prepared to sacrifice… We will sacrifice our children”‎

PA leader Saeb Erekat threatens and exemplifies in words what Rajoub is possibly ‎planning with the terrorists:  ‎

‎“Bloodshed and the spread of chaos in the region” ‎

Meanwhile, Rajoub posted these details of his meetings with Hamas and the other ‎terror organizations:‎

‎“We are working for true national partnership with the factions and Hamas, ‎and to assemble one political front…‎
‎- We have decided to release ourselves from all the agreements with the ‎occupation (i.e., PA euphemism for Israel).‎
‎- Our talk with Hamas in Istanbul was at the Palestinian consulate and not ‎under the auspices of any state…‎
‎– The factions that we met with in Damascus were positive regarding the ‎agreements with Hamas, and we agreed to continue the conversation…‎
‎- We have informed Hamas and the factions that Fatah views the assembling of ‎a national coalition government as a necessity at the current stage.‎
‎– We are heading towards an escalation of the popular resistance (i.e., term ‎used by Palestinians, which also refers to the use of violence and terror)…‎
‎ – We agreed with Hamas on all the coming steps as part of a national and ‎strategic process.”‎

Rajoub also posted his interview to Lebanese Al-Mayadeen TV where he said “We are ‎prepared to sacrifice… We will sacrifice our children”: ‎ 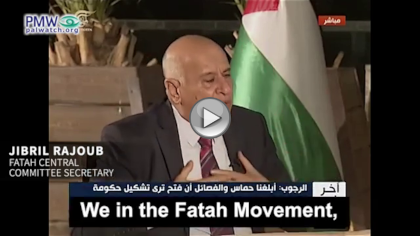 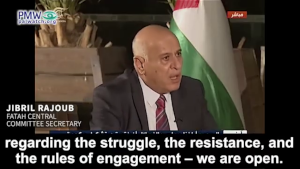 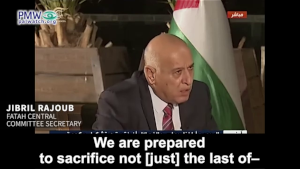 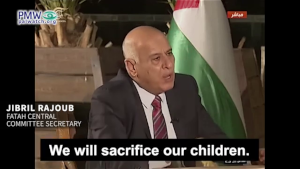 ‎‎“The first matter is creating an elected leadership inside the occupied homeland (i.e., ‎the West Bank). This is because we are heading towards an escalation of the ‎resistance. ‎
Therefore there needs to be a legitimate leadership that is internationally recognized ‎and committed to the UN resolutions, which may make strategic decisions by power of ‎the recognized right, [including] reexamining the rules of engagement with the ‎occupation, taking political steps… freezing the recognition, and possibly also ‎declaring a national rebellion An elected [government] can do anything ‎
And I tell you, we in the Fatah Movement, regarding the struggle, the resistance, ‎and the rules of engagement – we are open, we are prepared to sacrifice not [just] ‎the last of [incomplete phrase]. We will sacrifice our children. And the first unit that ‎will be in the first line will be from the [Fatah] Central Committee, the [Fatah] ‎Revolutionary Council, and our leadership…‎
We have come and placed before you our strategic approach as we see it in Fatah, the ‎foundations that we have agreed on with our brothers in Hamas… We have no ‎problem; we are prepared to be with Hamas, and prepared to be with the factions – ‎if only!”

This unity with terror organizations and return-to-terror is the PA’s response to the ‎peace treaties Israel has signed with Bahrain and the UAE, and the peace plan that ‎the US has put on the table. This is not the first time the PA responds to progress ‎towards peace with terror. In 2000, Israel offered what some say was an overly ‎generous peace offer to Yasser Arafat, and he responded with the 5-year terror ‎campaign, (the Intifada), in which more than 1100 Israelis were murdered. ‎

The following is a longer excerpt of Saeb Erekat’s statements:‎‎

‎“PLO Executive Committee Secretary Saeb Erekat said that the [Palestinian] ‎factions (i.e, which includes terror organizations) will achieve national unity, ‎and that the [PA] presidential order determining the date [of elections] will be ‎issued despite the American and Israeli challenges and threats.‎
In an interview with [the official PA] radio [station] The Voice of Palestine ‎yesterday [Oct. 3, 2020], Erekat added… that the occupation’s measures and ‎‎‘the deal of the century’ (i.e., refers to US President Donald Trump’s Middle ‎East peace plan) are destroying the two-state solution and the Arab Peace ‎Initiative, with the blessings of the states that are carrying out normalization‎‎[with Israel] (refers to the UAE and Bahrain; see note below –Ed.), which will ‎lead to bloodshed and the spread of chaos in the region. Erekat noted that ‎national unity is the basis for the struggle against the occupation on the ‎ground.”‎

Israeli peace agreements with the UAE and Bahrain – an agreement normalizing diplomatic ties between Israel and the United Arab Emirates (UAE), called the Abraham Accords, was announced on Aug. 13, 2020, under the mediation of US President Donald Trump. Following the UAE, Bahrain signed a similar peace agreement with Israel, as was announced on Sept. 11, 2020. Pursuant to the Abraham Accords, Israel and the UAE will discuss bilateral cooperation on a number of topics. In exchange for the agreement, Israel agreed to suspend its previously announced plans to apply Israel’s civilian law to parts of Judea, Samaria, and the Jordan Valley as per the Trump peace plan. The US announced that “Muslims throughout the world who wish to come in peace to pray at the Al Aqsa Mosque, will now be able to fly to Tel Aviv through Abu Dhabi to do so and will be welcomed.”

The terms “peaceful uprising/resistance,” and “popular uprising/resistance” are used by PA leaders at times to refer to peaceful protest and at times to refer to deadly terror attacks and terror waves. For example, ‎Mahmoud Abbas defined as “peaceful popular” the murderous terror during the 2015-2016 ‎terror wave (“The Knife Intifada”), in which 40 people were killed (36 Israelis, 1 Palestinian, 2 Americans and 1 Eritrean) and hundreds wounded in stabbings, shootings, and car ramming attacks. Abbas said: “We want peaceful popular uprising, and that’s what this is.” https://palwatch.org/page/9276

The United National Leadership of the Popular Resistance – A committee to oversee and direct the “popular resistance” that was established following the meeting of the secretary-generals of the Palestinian factions – which include several terror organizations – on Sept. 3, 2020. In this committee, Fatah is coordinating openly with representatives of internationally designated terror organizations such as Hamas, Palestinian Islamic Jihad, and the Popular Front for the Liberation of Palestine.