PA: Trump is a “Monster with Horns” [Watch] 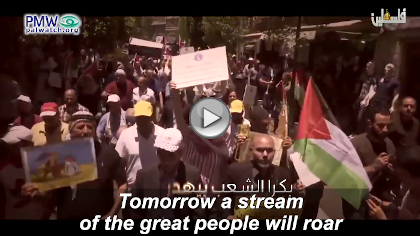 What better opportunity for the PA to rebroadcast a music video demonizing US ‎President Trump, his Senior Advisor Kushner, and Israeli PM Netanyahu than the ‎peace agreements signed with the UAE and Bahrain earlier this month in ‎Washington?‎

In the music video, which Palestinian Media Watch documented was first broadcast by ‎the PA to condemn the Bahrain Conference in 2019, Netanyahu is “Darkness,” who ‎uses Trump and Kushner as his “messengers,” and “a monster with horns” dragging ‎Trump as his “tail.”‎

Standing up to them is PA Chairman Abbas – the “light” – literally “the Son of the Sun”:‎ 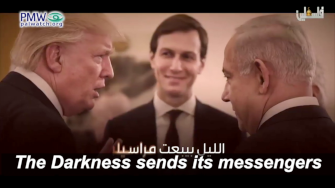 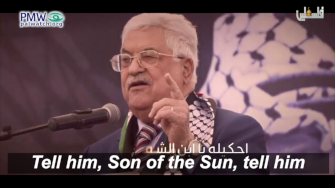 Visuals of Netanyahu followed by Trump are shown while the lyrics tell of “a monster with horns dragging a tail.” Abbas – the “Son of the Sun” – is instructed to “break its horn and cut off its tail”: 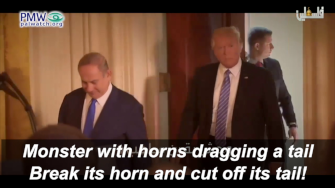 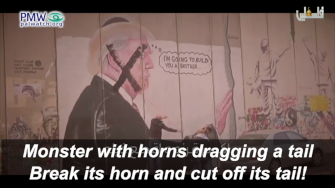 The monster later “knocks on the door with his fangs” while a photo of Trump is shown followed by a dollar bill with his face. 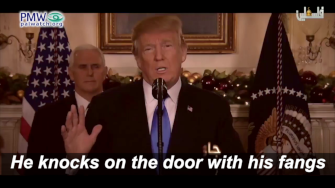 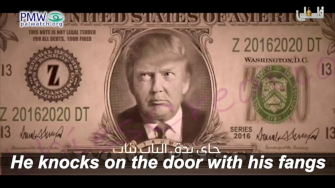 Lyrics: “[Whether you] carry your weapons or not‎
Tomorrow a stream of the great people will roar ‎
It will roar towards Palestine and has been singing this revolution for years…‎
The Darkness sends its messengers
Tell him, Son of the Sun, tell him
Tell him: Leave, O Darkness! Stop trying in every way
Monster with horns dragging a tail
Break its horn and cut off its tail!‎
The merchant has changed his tune
My country’s ear no longer heeds him…‎
He knocks on the door with his fangs”‎
‎

The video was aired on official PA TV in the context of the Bahrain Conference (June ‎‎25-26, 2019). The PA boycotted the conference, which focused on economic aspects ‎of Trump’s then undisclosed peace plan – the deal of the century – and discussed how ‎to bring prosperity to the Palestinians.‎

PMW documented other harsh and negative PA responses to the UAE and Bahrain’s ‎so-called “normalization” with Israel. ‎

The song was performed by the Palestinian Alashekeen band. PMW has documented that they have glorified and called for armed attacks against Israel in music videos and have sung about the end of Israel and that Abbas declared the band a “national institution” in 2010.