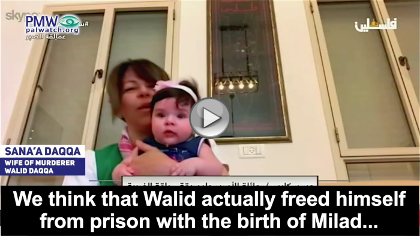 An Israeli Arab terrorist, Walid Daqqa, who is serving life in prison for participating in the kidnapping and murder of an Israeli soldier in 1984, smuggled sperm out of prison and fathered a child, as Palestinian Media Watch exposed earlier this year.

At the time, the reporter from official PA TV who interviewed the murderer’s wife complained that the imprisoned terrorist had not been allowed a visit in prison by his newborn daughter. PA TV decided to remedy this and make sure murderer Daqqa saw his daughter Milad – at least on TV. Interviewed on PA TV, the terrorist’s wife Sana’a Daqqa, stated that by Milad’s birth her murderer husband had “freed himself from prison”: 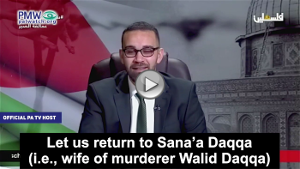 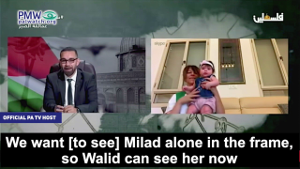 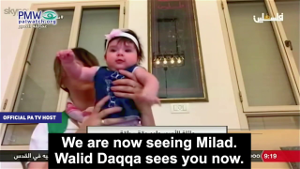 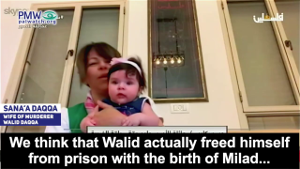 Official PA TV host: “Let us return to Sana’a Daqqa (i.e., wife of terrorist prisoner Walid Daqqa) so we can see pretty Milad. We want [to see] Milad alone in the frame, so Walid can see her now through the program Giants of Endurance for the first time, despite the occupation and the occupation’s cruelty. We are now seeing Milad. Walid Daqqa sees you now. We send him all the love and blessings in Gilboa Prison.”

Wife of murderer Walid Daqqa, Sana’a Daqqa: “We think that Walid actually freed himself from prison with the birth of Milad… This is the greatest victory and defiance… I want to thank PA TV, and you [host] Samer, because without PA TV Walid wouldn’t have been able to follow and see the birth of Milad.”

Terrorist Daqqa is not the only prisoner who has fathered children by smuggling sperm. To encourage other prisoners, PA TV makes sure to highlight this phenomenon, both by interviewing the mothers and filming the resulting offspring.

Recently, a host on the program The Giants also explained the “strange” and “difficult” journey the smuggled sperm travels from the prison to the medical clinic where the wife of the terrorist prisoner is inseminated: 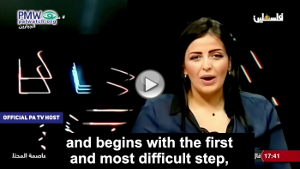 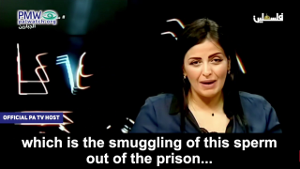 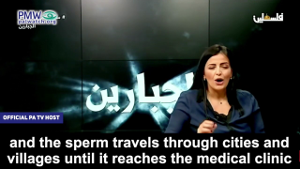 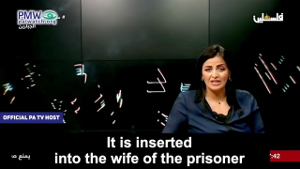 Official PA TV host: “Our topic today is slightly odd, making one sad and happy at the same time: Smuggled sperm, which passes through strange stations and begins with the first and most difficult step, which is the smuggling of this sperm out of the prison… Then the occupation checkpoints – checkpoint after checkpoint – and the sperm travels through cities and villages until it reaches the medical clinic that specializes in insemination. It is inserted into the wife of the prisoner who smuggled the sperm over the [prison] fence to create a pregnancy. The wife of the heroic prisoner carries in her womb the child of tomorrow, one of Palestine’s hopes.”

Having explained how the prisoners father children, PA TV interviewed the wife of terrorist Nasr Abu Hmeid who is serving 5 life sentences for participating in two terror attacks in which 4 were murdered: 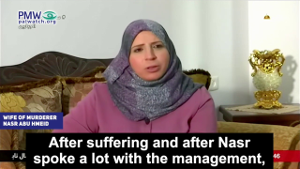 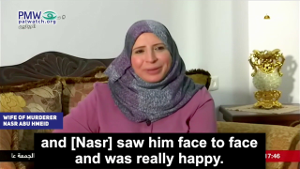 Ala’ Abu Hmeid: “[I’m] Ala’, the wife of prisoner Nasr Abu Hmeid (i.e., terrorist, involved in murder of 4) who was sentenced to 5 life sentences… I have three [children]: 19-year-old Raed, 18-year-old Aed, and 1-year-old Yaman [born of] smuggled sperm. It’s a very good feeling, very special… [Nasr] saw him on [PA] TV and I took him once for a visit, the first time I visited at the Ashkelon Prison where Nasr is. The prison management didn’t let Yaman enter because they knew Nasr had been [in prison] for many years, and where did this baby come from? After suffering and after Nasr spoke a lot with the management, with the prison guard, we succeeded and got [Yaman] in, and [Nasr] saw him face to face and was really happy.”

When her son was born, the mother stated she was happy to have brought a child into the world this way – “in defiance of the Jews.”

The child is the grandson of Um Hmeid the PA’s number one terror mom. She has 6 terrorist sons who together murdered at least 10 Israelis and participated in numerous terror attacks. The PA further stressed its support for the sperm smuggling when it sent its Minister of Women’s Affairs to congratulate Um Hmeid on the birth of her grandson.

In the following case, PA TV interviewed a released prisoner and showed his “reunion” with the child he fathered while in prison.

Salah Hussein – now a released prisoner – apparently also succeeded in smuggling out sperm to father a son while he was serving time. Interviewing him on the show Giants of Endurance for and about prisoners, PA TV broadcast footage of Hussein’s first meeting with his son Ali upon his release: 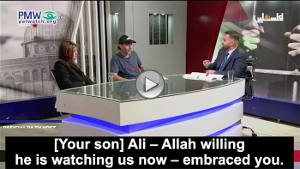 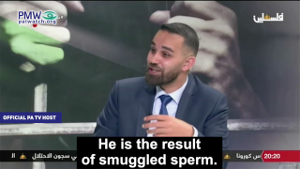 Official PA TV host: “[Your son] Ali – Allah willing he is watching us now – embraced you. He is the result of smuggled sperm. Let us look at Ali, when you left the prisons… This is the moment that our prisoners are now watching: Your embrace with Ali who is the result of sperm smuggling and who is now 5 years old.”

PMW has documented that PA TV once dedicated an entire program to this topic, entitled The Children of the Sperm.

Walid Daqqa – Israeli Arab member of the Popular Front for the Liberation of Palestine (PFLP). He is serving a life sentence for being part of the squad that kidnapped and murdered Israeli soldier Moshe Tamam in 1984.

Salah Hussein served 20 years in an Israeli prison but PMW was unable to determine the nature of his crimes.