Palestinians: No Difference Between Hamas and Fatah

“The proposed [unseen] US resolution is harmful to the Palestinians’ right of resistance.” — Emad Omar, Palestinian political analyst.

This is obviously a short-lived honeymoon that will end the day after the UN General Assembly vote on the anti-Hamas resolution. The morning after the vote, Abbas will wake up to the realization that Hamas was a strange bedfellow indeed. 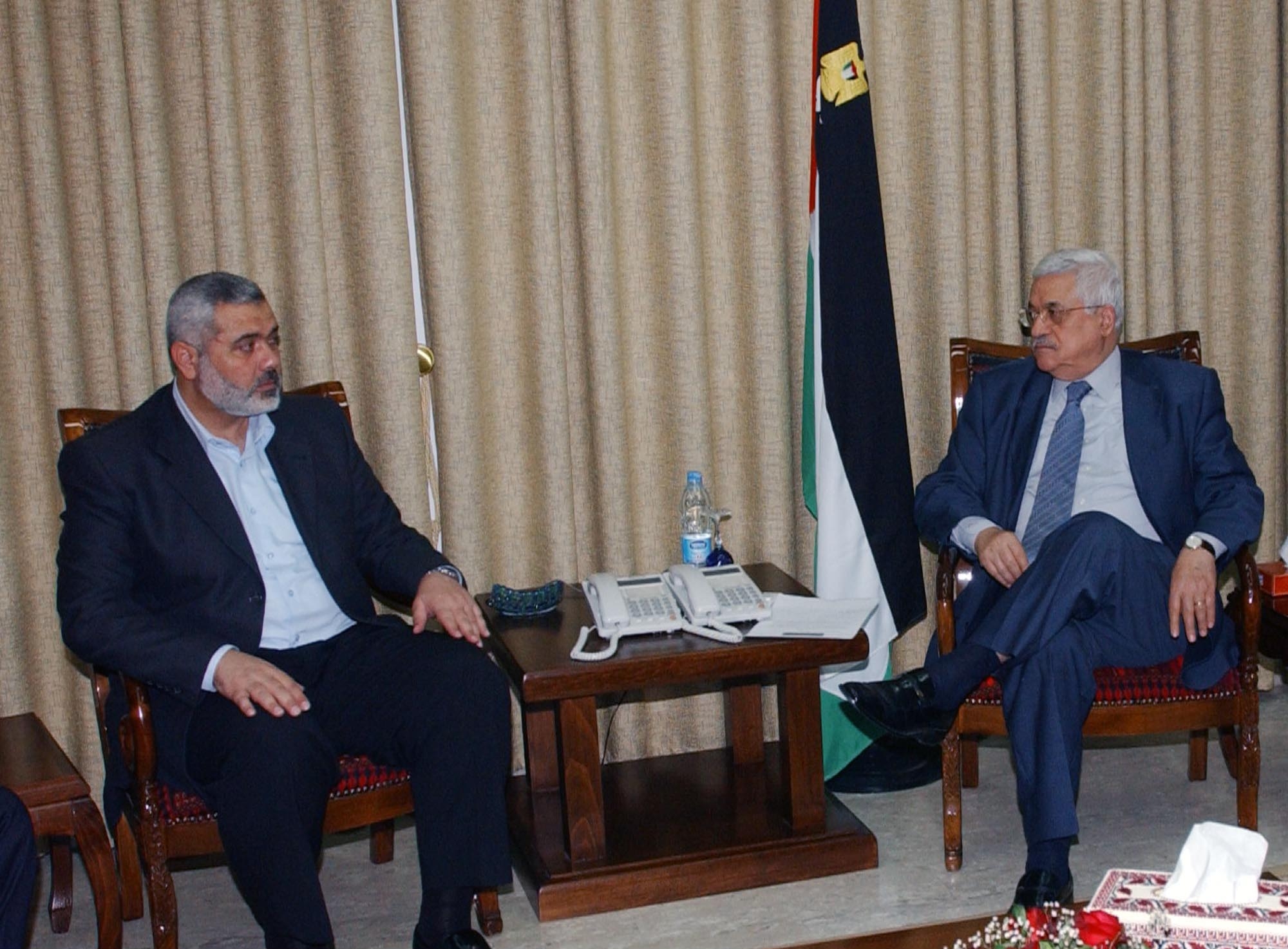 Palestinian Authority President Mahmoud Abbas’s hatred of Hamas is far from secret. But Abbas is now defending Hamas because he despises the Trump administration, which has sponsored a UN draft resolution that condemns Hamas. Pictured: Abbas (right) meets with Hamas leader Ismail Haniyeh on May 30, 2007 in the Gaza Strip. (Photo by Abu Askar/PPO via Getty Images)

Has Palestinian Authority President Mahmoud Abbas changed his position toward his rivals in Hamas? This is the question that some Palestinians have been asking in the wake of Abbas’s opposition to a US-sponsored draft resolution that asks the United Nations General Assembly to condemn Hamas for repeatedly firing rockets at Israel and instigating violence.

Abbas’s hatred of Hamas is far from secret. For years – and until today – Abbas has used every available platform to launch scathing attacks on Hamas.

He accused Hamas of foiling Arab efforts to end the dispute with his ruling Fatah faction.

He accused Hamas of masterminding a series of explosions targeting the homes of some of his senior Fatah officials in the Gaza Strip.

He accused Hamas of staging a coup in 2007 against his Palestinian Authority (PA) in the Gaza Strip and seeking to establish a separate Palestinian there.

He accused Hamas of standing behind the botched assassination attempt on his prime minister, Rami Hamdallah, in the Gaza Strip earlier this year. He even made a metaphoric remark that, “shoes will be pouring on the heads of Hamas leaders.”

In his last speech at the UN General Assembly, Abbas repeated his charges against Hamas and threatened to impose new punitive measures against the Gaza Strip unless Hamas allows his government to assume full control over the Hamas-ruled coastal enclave.

In the past few days, however, the rhetoric of Abbas and his senior officials in Ramallah toward Hamas has made a 180 degree turn. What is behind this sudden change? Has Abbas discovered that he was mistaken about Hamas all these years and that its leaders, Ismail Haniyeh, Mahmoud Zahar and Yeyha Sinwar are actually his good buddies?

The US-sponsored UN draft resolution condemning Hamas seems to have brought Hamas and Fatah closer to each other. Just last week, it seemed that Egyptian efforts to end the Hamas-Fatah rivalry had once again belly-flopped.

Now, in line with their refusal to accept anything that emerges from the Trump administration, the Palestinian Authority and Fatah have also found themselves in the awkward position of needing to reject and denounce the US initiative to condemn Hamas for firing rockets at Israel.

It is supposedly fine for Abbas and his officials to condemn Hamas on a daily basis. It is supposedly not fine, however, for the US administration to condemn Hamas for its terrorist attacks against Israel. This is the logic of the Palestinian Authority, which has also been imposing financial and economic sanctions on the Gaza Strip in the past year. The sanctions include, among other things, the suspension of salaries to thousands of civil servants, cutting financial aid to needy families in the Gaza Strip, and refusing to pay for fuel and electricity supplied by Israel to the residents living under Hamas.

Abbas and Hamas have been working separately to thwart the US draft resolution at the UN General Assembly. Abbas has instructed his envoy to the UN to make an effort to foil the anti-Hamas resolution, while Hamas leaders have been urging Arab and Muslim leaders and governments to help thwart the US initiative.

“Despite all our differences with Hamas, we are categorically opposed to the American and Israeli attempt to label Hamas a terrorist group,” explained Osama Qawassmeh, a senior Fatah official. We will fight to thwart the US resolution.”

Another senior Fatah official, Abbas Zaki, was even more adamant in his defense of Hamas. “Hamas belongs to us and we belong to Hamas,” he said. “If Hamas, which is practicing resistance, is considered a terrorist organization, this would mean that all Palestinians are practicing terrorism. Hamas, like all Palestinian factions, is a national liberation movement.”

Abbas and Fatah are defending Hamas not out of love for Hamas, but because they despise the Trump administration to the extent that they are willing to go to bat for their arch-rivals in Hamas. Judging from the statements of some of Abbas’s top officials, it is nevertheless clear that they fear that a condemnation of Hamas would pave the way for similar moves against other Palestinian factions, including the Palestinian president’s own Fatah.

Hamas, for its part, has expressed gratitude to Abbas and Fatah for their strong opposition to the US-sponsored draft resolution.

Does all this mean that Fatah and Hamas have agreed to patch up their differences and open a new page in their relations? The answer, of course, is no. This is obviously a short-lived honeymoon that will end the day after the UN General Assembly vote on the anti-Hamas resolution. Abbas wants to score points on the Palestinian street by showing that he is capable of challenging the US administration at the UN. For now, Abbas is prepared to swallow the bitter pill of defending Hamas. The morning after the vote, Abbas will wake up to the realization that Hamas was a strange bedfellow indeed.